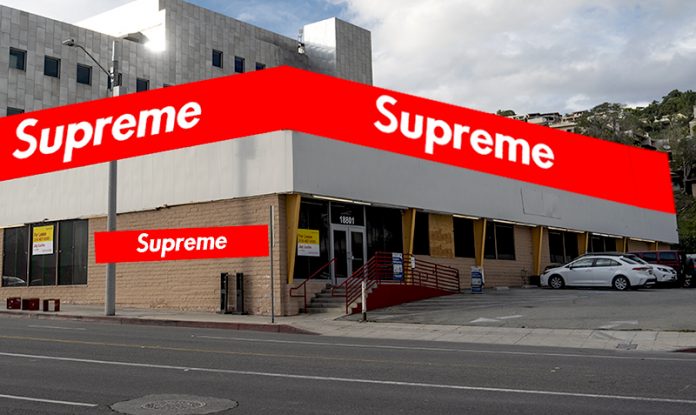 Can the City of West Hollywood handle a Supreme shoe store opening at the old Tower Records space? That’s what residents who live close to 8801 Sunset Boulevard are asking after learning that the store known for using hype tactics via a lottery system to create a feeding frenzy for limited hard-to-get street apparel, is moving to the neighborhood.

According to a source, two city officials have identified Supreme as the business moving into the space, however a city spokesperson will not deny or confirm any details about the street brand’s move to the Sunset Strip.

The City of West Hollywood’s permit portal eTraKiT, lists Project #ZC21-0276 as remodel for a new retail tenant at 8801 Sunset Boulevard. Plans for the new retail tenant were submitted on May 17, 2021, and approved on September18, 2021.

Permit #B21-0757 submitted on September 10, 2021, is requesting a remodel for the new retail tenant, which include changes to the facade and raising 2,645 SF of roof by 3′-9″. Other improvements include interior renovations, and the installation of a sculptural artwork. That permit is still pending and does not name Supreme as the new retail tenant.

West Hollywood residents have expressed concerns that Supreme will bring a certain type of customer to the Sunset Strip. Supreme limited edition street apparel is widely sought after and can have a resale value that can triple in the thousands of dollars. Some customers use the resale of these hard-to-get items as a main source of income, which is why people camp out in front of the store for days.

WeHo residents are looking to the Supreme location on the Fairfax district as a model for what they allege will draw large crowds, rude clientele, and a rise in crime if some conditions are not considered by the City of West Hollywood.

“It’s a FRIGGIN nightmare on Fairfax,” said one resident via an email stream. “they are so rude – they want to use free restrooms in restaurants, they leave all their crap on the sidewalks, they block other stores…. you have NO idea what they go thru with kids that line up for Supreme and the store Dolls That Kill next to them. GOOD LUCK!!!!!!!!!!!!!!!!!! I don’t envy the other store owners near them. Ohhh, I forgot to mention the parking lot by canters is for canters only but these rude kids don’t care and it’s almost impossible for Canters to police them because they start lining up so early in the morning there isn’t anyone in the lot to keep them out and lest I forget – when one of them went into canters one morning to use the bathroom and the cashier nicely told them it was for customers only she got punched in the face!! They don’t line up in a straight line on the sidewalk they are all over the place!!!”

“Will Supreme be able to be kept safe and under control 7 days a week during the day and at night?” A resident asked who wishes to remain anonymous out of concern for their safety. “We don’t have very good infrastructure now to handle the outlandish crime we have in West Hollywood.”

Conditions being discussed at the ZOOM meeting will include not allowing overnight lottery lines, or removing lottery lines altogether. “One security guard cannot handle 500 people or more in a line to get the latest release of some sneaker where the people in line get angry cause they feel someone cut in the line, said something to them in line or they feel that they have waited too many hours in line,” reads an email submitted to WEHO TIMES.

The Zoom on Thursday, January 27, 2022 will discuss the renovation of the existing single story retail building to remain a single-story retail space with existing parking area.

Details on the upcoming community meeting are as follows:

We have a “lions, tigers, bears and, non-whites, oh my” hysteria over the Supreme store after years of consistently enduring record levels of white nationalist terrorism, REALLY❓ No fear of racist white males with torches in the night yelling “blood & soil, Jews will NOT replace us,” numerous assaults by the proud boys even armed with automatic weapons that have killed MORE Americans then all terrorist attacks including 911 combined, antivaxx (a cause white nationalists violently support) attacks against Medical Personal during the ongoing COVID-19 Pandemic but, fear of non-white shoppers. 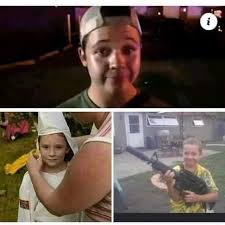 Boo hoo! Tbe precious West Hollywood residents want to police and control what business opens in their neighborhood. Its not hard to figure what they mean by a certain kind of customer. We hear loud and clear

West Hollywood residents have expressed concerns that Supreme will bring a certain type of customer to the Sunset Strip. — Your Racist Dog Whistle is blowing loud and clear tonight! By the way, I literally go to Canter’s every Saturday and am always happy to see Supreme and Dolls Kill’s customers participating in the local economy.