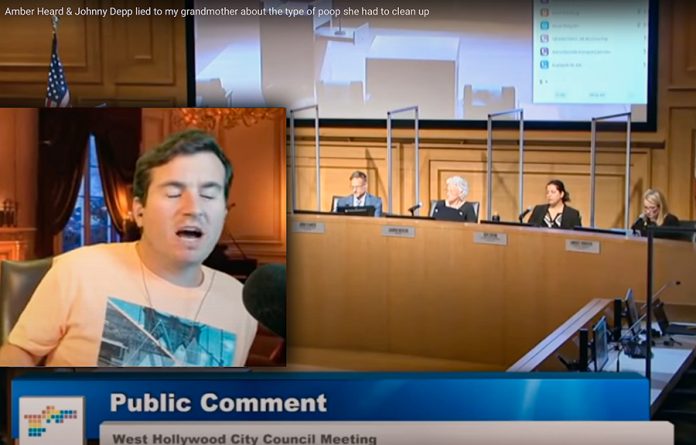 “Hey council, my name is Hayden Alexander and I’m calling on behalf of my abuela, my grandmother,” said Stein for the public record. “I’m half-Hispanic and the recent news about Amber Heard and Johnny Depp–my grandmother was actually the one who cleaned up the poop in Johnny Depp’s bed. My grandmother was under the impression that it was dog feces and not human feces, so I would like if if the council could do something, because the apartment was located in West Hollywood and so now we’re trying to file a civil suit, but we know that in West Hollywood there’s Ed Buck who murdered all those guys with meth amphetamine. We know West Hollywood is a very seedy place, so I really don’t want my abuela to have to suffer and actually clean up human feces out of Johnny Depp’s bed. That’s not OK. Amber Heard said it was her dog. Come to find out in court, it’s not, and my abuela, she’s too afraid to come to the council, but luckily, I’m not. I’m asking the Mayor of Malibu if we could do something about this, because I don’t think it’s OK to have celebrities just poop all over their bed and then make the housekeeper clean it up. If we could just do something, if the council could actually stand up. She’s a person of color. There are persons of color on the council. You shouldn’t just let a white cisgender woman poop all over her bed–a multi-millionaire– and make the house staff clean it up. It’s not even about cleaning it up, they don’t even admit that it’s human feces. They lie and say it’s from the dog, and then Johnny Depp is on trial–under oath, saying that it is human feces. My grandmother, she’s immunocompromised, she could’ve been sick, Lord knows, so I really think that the council needs to stand up. These celebrities shouldn’t just be able to poop on their bed and lie about the poop that it is–misrepresent the poop and then come to find years later in a court case, that it was human feces. This isn’t how we should treat people in West Hollywood where Ed Buck is literally murdering people, so the council members and Mayor, you have to do something to help the city of West Hollywood. There are meth amphetamine users that are dying constantly, and fentanyl users, and now we have big time celebrities that literally…”

And stein and was curtly cut-off by the timer.

News had just reached the council of the leaked Supreme Court of the United States draft opinion stating that a majority of the court would vote to overturn Roe v. Wade’s holding of a federal constitutional right to an abortion, so the council was not in the mood for Mr. Stein’s jesting. He didn’t get a single chuckle from the council chambers.

Stein also trolled the West Hollywood city council at a regular council meeting on February 22, 2022. It was another awkward moment during public comment where Stein spun a crazy tale surrounding an alleged art show in West Hollywood, children, Hunter Biden, crystal meth use, a Carl’s Jr spicy chicken sandwich, and how the COVID-19 vaccine made him impotent.

Alex Stein is a self-proclaimed king of conspiracy. He hosts a podcast called Conspiracy Castle, which is categorized as parody, comedy, and improv.

Stein posted a video of his most recent West Hollywood prank on his YouTube channel where he filmed himself making the comments.

Not his best work. The guy didn’t know where to go past the misrepresented poop, so he repeated himself like four times. BOOH. Booh Alex Stien. Booh.

Please don’t promote this idiot by featuring him. He wastes precious time with no other intention than self promotion. Don’t indulge him.

I disagree. I never would have known the back story behind that crazy phone call were it not for someone reporting on it. We shouldn’t be so humorless, we turn a blind eye on the crazy stuff they are pulling.

This man is human trash