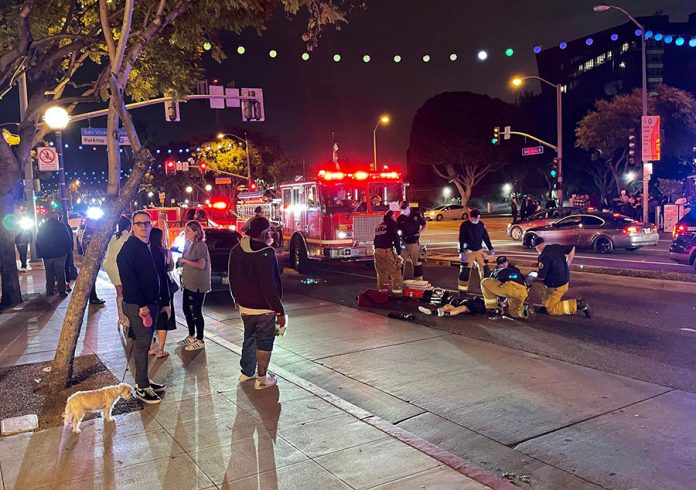 A person who appears to be a woman was severely injured in a vehicular hit and run incident on Sunday night/Monday morning in the heart of the LGBT Rainbow District. The person was struck by a car on Santa Monica Boulevard at the San Vicente intersection at roughly 12:30 a.m. The car was heading westbound on Santa Monica Boulevard. Eye witnesses say the car kept moving and fled the scene.

Video footage sent to WEHO TIMES that is too graphic to share here, shows two women crossing northbound on the west corners of Santa Boulevard by Rocco’s WeHo. They were jay walking. Video shows them pausing at the median while vehicles were moving past them heading west. They both made a move to cross the second half of the boulevard, however the victim stopped and bent down to pick something she dropped. She was struck by a fast-moving vehicle and rolled over the car and was catapulted several feet away from the crosswalk.

According to witnesses, the car did not stop. It kept driving leaving the victim on the ground. The vehicle in the hit and run incident appears to be a dark colored 4-door Nissan Altima.

The bars and restaurants at the LGBT Rainbow District were noticeably busy for the three-day weekend as many business are closed in observance of the Martin Luther King Jr holiday January 17th.

“We hope everyone visiting #WestHollywood this weekend has a great time,” reads a post by the West Hollywood Sheriff’s official Instagram account. “This evening we have a lot of travelers in #WeHo enjoying the three day weekend on Santa Monica Blvd.”

The condition of the hit and run victim is not yet known. Medical first responder and the West Hollywood Sheriffs were on the scene. Witnesses say she was picked up by a medical ambulance and was taken to a nearby hospital.

If you need to submit a tip regarding this hit and run incident to law enforcement anonymously, contact LA County Crime Stoppers online at https://www.lacrimestoppers.org or call 1-800-222-8477. All tips are completely anonymous. No personal information, phone numbers, e-mail, IP address or location is ever requested, saved, traced, tracked or monitored.

I’m the guy with the dog in the first picture and honestly it’s a miracle the lady survived. I was walking my dog and the sound the car made hitting her was like Stallone hitting the meat in Rocky and she flew about 10 feet and landed right next to me. Blood instantly came from I believe her ears and her right arm was at an angle I didn’t think was possible. I would say the car was going around 35 miles an hour and if they would have stopped I honestly don’t think it was their fault as the… Read more »

I wonder if the vehicle only had one headlight working? Perhaps the pedestrian didn’t see the car. And I wonder if the vehicle had a license plate? Hopefully it did and security cameras around the location captured it. This is why we need current vehicle traffic violations enforced. Our unhinged city council is actually considering not enforcing these laws and if they do vote in favor of not enforcing these laws then we’re going to see more of these accidents and more of these people getting away with it. These laws were created to keep everyone in the public sector… Read more »

Sorry to hear about her being severely injured. However, DON”T JAYWALK!!

she was’t jay walking- her body was THROWN to that location.