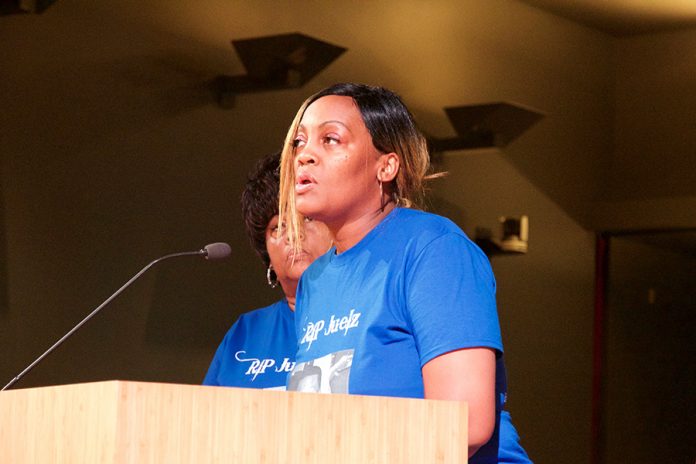 The West Hollywood city council last night brought Gemmel Moore’s mother and the local LASD station captain to speak about the investigation into his death at Ed Buck’s house. One council member, though, seemed most interested in warning the potential witnesses – homeless, young, black, sex workers taking drugs – that they would go to jail if they didn’t first hire attorneys before talking to detectives.

At the podium with her mother and daughter, LaTisha Nixon said, “I just basically, I would like for a deeper look into this case. We have a lot of victims who have came forward, we need more information, but we need immunity for some of these people, because some of the charges, by them testifying, it, they can be felonies.” “[if] before he died, the West Hollywood Sheriff’s Station would have done a thorough investigation–um, because it’s my understanding there had already been reports on Ed Buck. My son being one of them, and the report is nowhere to be found. They just told them to ‘go, leave,’” asserted Ms. Nixon.

“…I’m asking for justice for my son. Regardless to the fact of whatever he did, the meth or whatever, he still was my son, he still was a person… he could have been any one of your sons, any one of you guys. This meth situation is out of hand and needs to be addressed.”

Ms. Nixon related to WEHO TIMES that late last year she received a disturbing phone call from her son, Gemmel Moore. “He said he had been shot up against his will by this man, this rich white guy. He was terrified.”

Referring to that incident and others like it reported since her son’s death, she noted at council, “Ed Buck needs to be stopped; he needs help. He needs to be stopped. I want you people to put pressure on whoever needs pressure so that these people can get immunity and I can get justice for my son.”

“This is hard for all of us… It’s not fair that he’s such a big political donor – and I’m sure maybe he’s donated to some of you.” She placed that aside, however, saying, “If you guys can look past that.”

West Hollywood Sheriff Station Captain Sergio Aloma spoke to the matter, emphasizing the need for victims to come forward and the department’s efforts to take their testimony despite fears of prosecution.

“It is critical for anyone who has information in this case or prior cases to come forward, contact homicide bureau. I understand the concern and request for anonymity from potential witnesses, but our homicide bureau is investigating this case thoroughly but, however, they can’t move forward without witnesses coming forward and giving them information.

“As far as granting immunity for prior acts, that has to be evaluated, and they cannot do that without persons coming forward and speaking to them so they can make that evaluation and then have a conversation with the District Attorney’s office as it relates to immunity.”

Mayor John Heilman at that point asked, “And the Sheriff’s Department would communicate with the District Attorney about requests for immunity?”

In response to that, Capt. Aloma said, “Yes, I spoke to Captain Chris Bergner of our Homicide bureau this morning and investigators are more than willing to evaluate that information, whatever that information is, they just need people to come forward to speak to them.”

In her comments, Ms. Horvath made an impassioned plea for justice. “I’m deeply disturbed the accounts and local reports. As you have heard, the case involves someone well-known to this community and in LGBT and local political circles.”

“In full disclosure,” she said, “I have not (emphasis hers) received any donations from that individual.”

Ms. Horvath was the only person sitting on the dais who has not taken campaign donations from Ed Buck, either directly or through a PAC. In fact, Ed Buck was the driving force behind the 2011 Fur Free WeHo effort that cost Ms. Horvath her council seat and boosted John D’Amico into his. John Duran is perhaps Ed Buck’s largest recipient of largess, taking in tens of thousands of dollars over the years for PACs and his own campaigns.

Continuing, Ms. Horvath said “it shouldn’t matter who the subject of an investigation is. An investigation must be conducted thoroughly and without prejudice.”

Making note of Ms. Nixon’s point about black youths turned away from making police reports when seeking justice at West Hollywood Station, she said, “our local station needs to be a refuge for victims of crime, regardless of skin color or immigration status, regardless of whether they are under the influence of drugs or alcohol, regardless of the circumstances that brought them into the station, all victims of crimes need to be heard.”

She said she wanted authorities to “take the necessary steps to make it possible for anyone with any information to safely come forward. I want all the facts to be known.”

Ms. Horvath said that a victim advocate resource employed by the District Attorney’s office exists in the WeHo station, “available for anyone who needs support or needs to know their options as a victim of crime. I encourage all citizens to use this resource to report facts pertaining to this case and any other case.

“Transparency is the foundation of public trust,” she finished.

Which brought a dire warning from Mayor Pro Tempore John Duran, speaking in his role as a defense attorney. Mr. Duran has told people that he has represented Mr. Buck in the past. He also remains perhaps the greatest beneficiary of Mr. Buck’s local political donations.

Mr. Duran said, “I’m sorry, I wasn’t gonna speak on this tonight, but I have to now add something… Before anybody speaks to the Sheriff’s Department, you need to be aware that the Sheriff’s Department does not grant immunity. The West Hollywood City Council does not grant immunity. The only agency that grants immunity to a witness is the District Attorney’s office. That type of immunity needs to be pre arranged through legal counsel speaking to the District Attorney before immunity is granted.

“Transparency doesn’t always work with the criminal justice system. Transparency can subject you to criminal arrest and prosecution. So, before you do anything, you should seek legal counsel to advise you on how to move forward. Before you speak to law enforcement.”

The declaration seemed designed to put a damper on anyone’s desire to come forward, as it was put forward without offering any information on how to obtain free legal aid or advantage oneself of the DA’s advocate Ms. Horvath mentioned.

Immediate reaction to that statement from transgender writer/activist Ashlee Marie Preston was, “That’s witness intimidation.” Her point being that young, black, mostly homeless sex workers who take drugs seldom hold a defense attorney on retainer or can afford one for themselves if arrested, let alone hiring one to give testimony in another matter.

According to AE (a prosecutors’ resource), “witness intimidation can, and often does, result in failure to report crimes, refusal to speak with investigators, recantation of statements previously given, and refusal to testify at trial.”

“Witness intimidation is ‘behavior which strikes at the heart of the justice system itself.’ When intimidation is permitted to occur, and when it is not effectively addressed by the system of justice, victims and witnesses suffer additional harm, defendants escape accountability for their actions, and the general public becomes cynical and loses confidence in law enforcement,” says the monograph.

Captain Aloma told WeHo Times in an interview that the victim’s family raised the issue of immunity themselves, and that immunity is a special feature of law that seldom comes into play in a case and with witnesses such as this.

Findlaw.com says, “An ordinary case of prosecutorial immunity involves prosecutors willing to allow a little fish to go free to put a bigger fish on the hook. For instance, a low-level drug dealer might be offered immunity in exchange for testimony that could convict a high-level trafficker. Essentially, prosecutors must see some greater value in granting an individual immunity — in a crime fighting or overall justice sense — than prosecuting that individual.”

Yet immunity is not the only way to transparently participate in an investigation without fear of prosecution, for example, when the witness’s crime is un-prosecutable, to begin with.

Noting this in an interview with Captain Aloma, he said, “When we have witnesses to a potential felony, you’re right, detectives often find that misdemeanors allegedly committed outside their view are not worth prosecution and could inhibit the larger investigation. We encourage people to come forward if they may have been involved in misdemeanors and have information without fear of prosecution.”