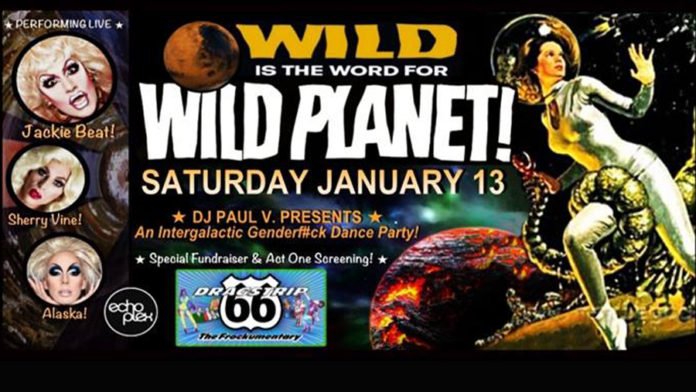 Wild Planet is also a special fundraiser for “Dragstrip 66: The Frockumentary”–a film in the works that documents 20 years of Dragstrip 66–highlighting the celebration of a wild nightclub that mixed performance art, fashion, music, masquerade and lots of guys in face paint, plumage and all types of dress, or in some cases, undress. Dragstrip 66 began when best friends and club promoters Mr. Dan (Gina Lotriman) and DJ Paul V launched the event at Rudolpho’s in Silver Lake back in 1993. Once a month, the neighborhood Mexican restaurant in Silver Lake was transformed into all things fabulous and freakish where attendees were part of the show. Dragstrip 66 was viewed as something much more than a dance club. It was an irreverent and decadent celebration of self-expression, community, and imagination that attracted fierce drag queens, queer rockers, muscle boys and celebrities. The midnight shows were a must see and featured names we know and love today like Jackie Beat, Sharon Needles, Mink Stole, Sabrah Summers, Momma, Joey Arias, Varla Jean Merman, and Kay Sedia to name a few.

The Wild Planet party aims to be exactly that. Everyone is encouraged to attend in various forms of wild space age dress (or undress). There will be live performances and a special screening of the Act One rough cut of “Dragstrip 66: The Frockumentary!”

All proceeds will provide crucial funds needed to continue work on the Dragstrip 66 movie.

For more information on the Dragstrip 66 movie, click: DS66TheFrockumentary.com.