It appears Tail O’ The Pup is coming back to the City of West Hollywood–this time with some drinking privileges. The California Department of Alcohol Beverage Control (ABC) states that the hot dog stand just applied for a liquor license transfer at 8512 Santa Monica Blvd. TOTP WEHO LLC applied on October 1, 2021. It is currently pending: www.abc.ca.gov. 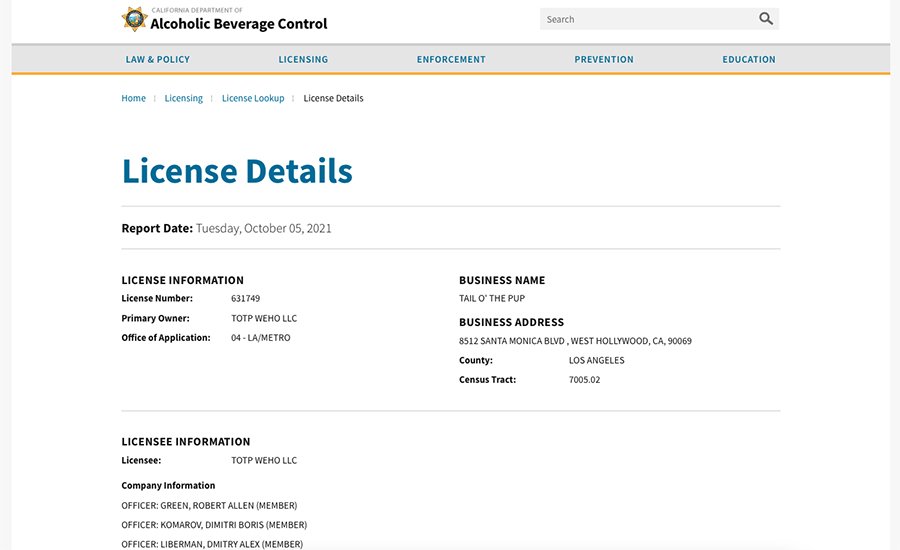 The original hotdog stand shaped like a hotdog first opened in 1946. It originally stood on the northwest corner of Beverly and La Cienega boulevards, but the opening of Sofitel Hotel in the 80s moved it down the street to the northwest corner of Beverly and San Vicente boulevards. It would move further north to a Cedars Sinai parking lot on San Vicente, before vanishing in 2005. It’s been in storage since and rumored that it was reopening at various locations dating back as far as 2016.

If approved, and all goes according to plan, the historical Tail O’ The Pup will be moving into a property that is no stranger to historical significance. The restaurant and lounge property located at 8512 Santa Monica Boulevard has a plaque at its entrance stating that this is where The Doors recorded L.A. Woman in 1971.

The 5,000 Square Foot property was listed for sale in 2020 according to Loop.net. The most recent incarnation was an Italian Restaurant called Blackship. The owners announced its closure in August 2020. “Due to Covid-19, Blackship has permanently closed,” reads the last business update on Yelp. The two-story commercial property was built in 1958. It is adjacent to the Shake Shack.

In other Tail O’ The Pup news, TOTP WEHO LLC, also applied for liquor license for On-Sale Beer and Wine – Eating Place at 1901 W Sunset Boulevard in Silverlake. Check out the ABC report below: 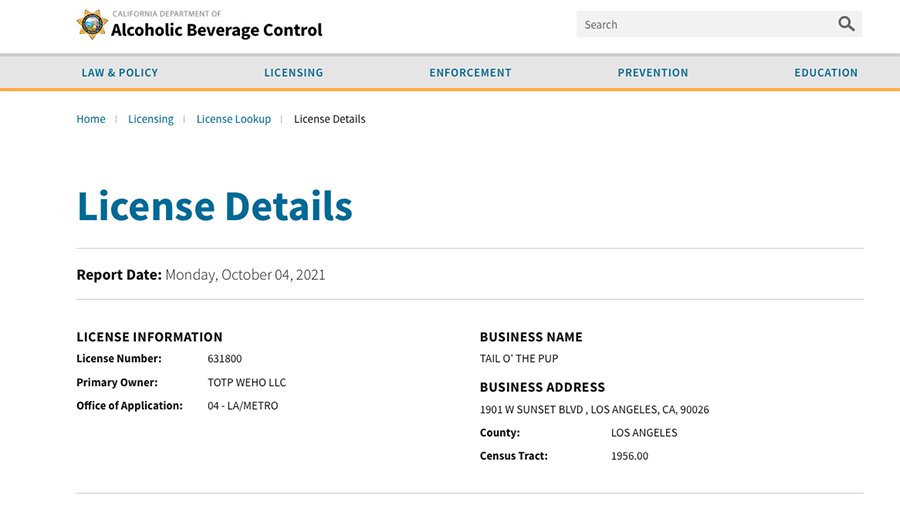 According to tailothepup.com, the entity behind the historical hotdog stand is a company called 1933 Group. It purchased the Tail o’ the Pup facade some time in 2018/19 and has been looking for a location in West Hollywood.

1933 Group is credited for a list of historical restorations:

Well when it opens Paulo you can at least partake in the wieners since we know you don’t drink anymore.