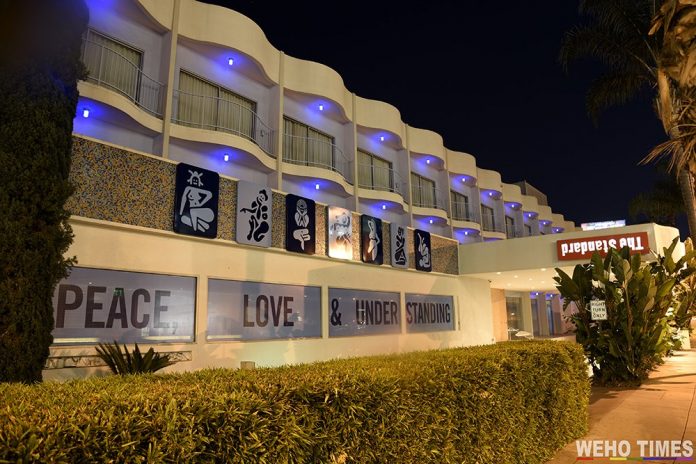 To attend the virtual meeting click on the link below:

“The West Hollywood Preservation Alliance (WHPA) urges the Historic Preservation Commission to affirm city staff’s recommendation to support local cultural resource designation for the property located at 8300 Sunset Boulevard. The WHPA concurs with the findings of applicant Steven Luftman and the organization Save Iconic Architecture regarding this mid-century masterwork.

Formerly known as the Thunderbird Inn and most recently as The Standard, this property retains all seven aspects of historic integrity as defined by the Secretary of the Interior Standards for historic preservation. Few structures in our city and adjacent areas retain this much integrity, showcasing a style that is emblematic of a vital and creative Southern California typology.

WHPA understands that there has been a request to delay the HPC’s vote but believes that such a designation should be considered as a buyer’s incentive. The purchase of an historically designated building could receive valuable tax benefits and major rehabilitation funding in coming years.

The preservation community has learned from past experiences that delays seldom benefit an historic resource. We urge the HPC to recommend to the City Council that it designate 8300 Sunset Boulevard as a local cultural resource in West Hollywood by approving HPC Resolution 22-158 at tonight’s hearing.

The West Hollywood Preservation Alliance is a non-profit public benefit organization working to identify, protect and preserve the historic, architectural, and cultural resources of West Hollywood and adjacent areas through education, advocacy and assistance.

There’s some very fun history of this treasure at this link:
http://cms6ftp.visioninternet.com/weho/packets/hpc/9AC.pdf

Thanks for sharing. Great historical photos and articles.

This is the best idea!