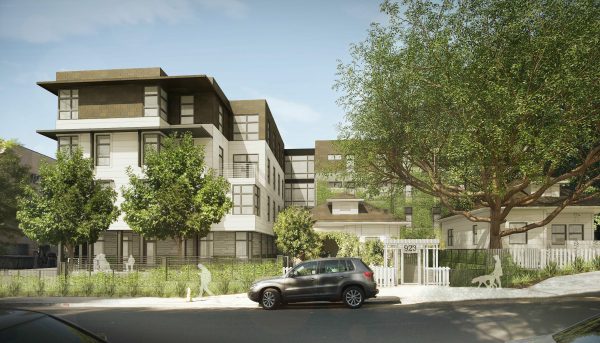 The City Council will consider an appeal filed by Wail Bushara on behalf of the Friends of Palm Avenue regarding the Planning Commission’s adoption of Resolution No. PC 20-1367, approving the construction of a new senior congregate care housing facility and rehabilitation of two single-family bungalows designated as cultural resources. The project includes the construction of a new four-story, 33,460-square-foot senior congregate care housing facility with 48 units and a one-level subterranean parking garage using a Senior Housing density bonus. The one-story historic building at 931 Palm Avenue will function as a self-contained unit operated by the facility, resulting in a combined total of 49 units for the project site.

The West Hollywood Preservation Alliance is asking that City Council to support the appeal of the Friends of Palm Avenue (FOPA) and deny the proposed project because of its massing and height, its look and feel, and its impact on designated cultural resources. Future development on these three remaining contiguous parcels of land from West Hollywood’s historic Sherman era needs to be rethought and a full Environmental Impact Report conducted.

The WHPA believes this is not the right project currently because of serious concerns with the staff report’s reasoning on Pages 10-11 regarding Contention 7. In fact, the WHPA believes that this project does not conform to the Secretary of the Interior standards, especially regarding Standard 9: “New construction needs to be built in a manner that protects the integrity of the historic building(s) and the property’s setting…” a historic building traditionally surrounded by open space must not be crowded with dense development.

According to a WHPA statement, the City Architect and planning staff stated in a report for the July 9, 2020, meeting of the Planning Commission’s Design Review Subcommittee: “From a scale perspective, the building looms over the bungalows, mitigated in part by a step back element at the street facing front of the south leg. The form of the structure is a block mass and it is intended to serve as a backdrop to the historic bungalows.”

“Looms” and “block mass” indicate issues with the massing and size of the new building as well as with its spatial relationships to the two historic bungalows. The building immediately behind 931 Palm is a four-story apartment building on Larrabee. The distance between that building and the back of the bungalows is 92.5 ft.

“Looms” and “a block mass” are not design terms that instill confidence in the preservation community. Let us preserve not only the historic structures themselves but also the last vestiges of the physical and spatial environment of Old Sherman. Please support the Friends of Palm Avenue appeal, deny this project, and request a new development proposal that respects our city’s history and the neighborhood.