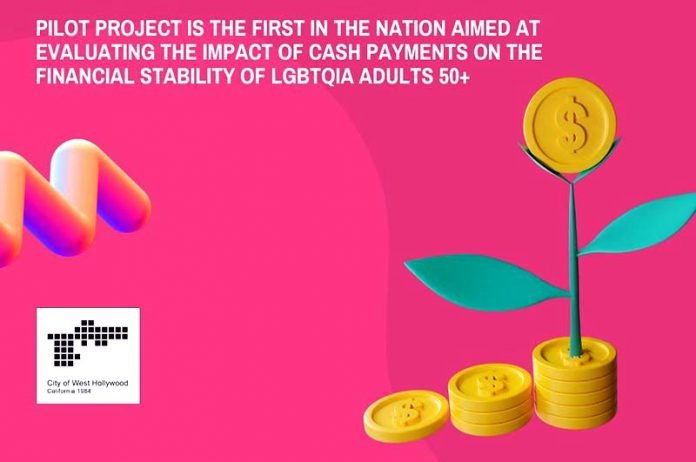 City of West Hollywood city council received an update on the City’s original Guaranteed Income pilot project which is now on the consent calendar for the next regular city council meeting on Monday, May 16, 2022. A city staff reports states that the city became aware that the pilot, as it was created and supported by a government entity, was susceptible to legal challenges due to the inclusion of LGBTQIA criteria as an eligibility requirement to participate.

In December 2021, the City Council approved the West Hollywood Guaranteed Income pilot that would provide $1,000 per month for 18 months to 25 community members that met the following four criteria: (1) West Hollywood resident; (2) Identified as lesbian, gay, bisexual, transgender, queer, intersex or asexual (LGBTQIA); (3) 50 years or older; (4) Living on a low income. The pilot was to be the first LGBTQIA-focused and the first older adult-focused pilot in the country.

Having LGBTQIA identification as an eligibility requirement for the pilot could potentially violate the California Constitution as sexual orientation is a protected suspect class in our state. This means that when a law or government-funded program treats persons differently based on sexual orientation, those laws and program are subject to an exacting standard known as strict scrutiny (even if the law is intended to benefit that protected suspect class).

City Attorney, City staff and pilot partners recommend that the City Council revise the pilot to include three of the four original criteria (residency, age and income level) in order to satisfy the legal obligations, protect potential participants, and move forward with a program that serves community members in need of financial support and stability.

West Hollywood resident,  Victor Omelczenko, responded to the revision with a public comment that he forwarded to this publication below:

It’s extremely disappointing that this innovative guaranteed income pilot project is being revised to remove low-income seniors who are LGBTQIA as the primary eligibility requirement. I understand that there can be legal challenges to such targeting of benefits, but it looks like someone was asleep at the switch when designing and then promoting this program in the first place. Who’s been in charge here?

Although I like to stay on top of things, I must say that I missed this worthy item as it evolved. But now I see that it was treated several times as a consent item, with apparently little or no discussion. And it’s being treated on consent again! I wonder now – were the LGAB or the TAB involved at all?

So, let’s have a conversation before you consent to what I now see as a bloated project with the selected non-profit administrator set to receive nearly one-third of the funds in overhead! Nearly $200,000 to administer just $450,000 that goes to only 25 fortunate individuals ($18,000 to each over the 18 month pilot project or $1,000 a month in guaranteed income)!

Return this to the drawing board and find a less costly administrator which then raises the question of how was this administrator selected in the first place – was there an RFP or competition?

And given that $337,500 in Measure H funds designed to combat homelessness are being used, I suggest that anyone who is already benefiting from living in inclusionary or other affordable housing in the city NOT be eligible for the revised program. Let’s look first at housing and assisting the unhoused or those renters who are being evicted.

The City doesn’t want to get sued. There’s really not much more to discuss on this matter. So it gets moved to consent.