The City Was Quiet After the WeHo Curfew this Morning

It was calm after the storm in the City of West Hollywood this morning with the streets mostly empty after the WeHo curfew was lifted at sunrise. The curfew was in response to the violence, protesting and looting that took place during what started as peaceful calls for justice for the murder of George Floyd.

The streets are quiet, aside from the sound of Helicopters, which could still be heard buzzing in the not so far distance a little after 9am. Empty shoe boxes littered San Vicente Boulevard, and there was a surreal emptiness that felt different from when when the city was vacant during Stay at Home Orders.

For some WeHo businesses, like Kreation organic juicer, it was business as usual. They were open to the public with signage asking their customers to adhere to social distancing–not that they had any customers. Aside from the random jogger, Santa Monica Boulevard was a ghost town after the curfew.

Joey’s Cafe had some customers enjoying breakfast in the patio. Customers weren’t  necessarily sitting 6ft apart, but considering the chaos throughout the nation, social distancing and COVID-19 infections have taken the backseat to the pressing matter of more protests and violence breaking out in the city.

Other businesses like CVS Pharmacy, The Artist Tree cannabis retailer, and several businesses along Melrose Ave were boarded up in anticipation of more demonstrations.

Chrome Hearts had security standing outside. Med Men, which was looted during the riot had an armed guard.

Then there is the Graffiti–not a normal sight in the City of West Hollywood. The phrase “F*ck 12!” appears throughout Santa Monica Boulevard. The Sheriff’s station was tagged. The US bank across the street had “Fuck Cops” sprayed on the side of the building. The Bank of America a few doors down was hit, as well as 24-Hour Fitness Sport. Bus stops, and the wood paneling on what was once the Hamburger Haven had the words “Black Lives Matter.” According to Urban Dictionary, ‘fuck 12’ means ‘fuck the police’. Other definitions state that the ’12’ specifically mean the Drug Enforcement Agency (DEA) and Narcotics Unit. Many have stated that the slang originated in Atlanta, Georgia or Oakland, California. 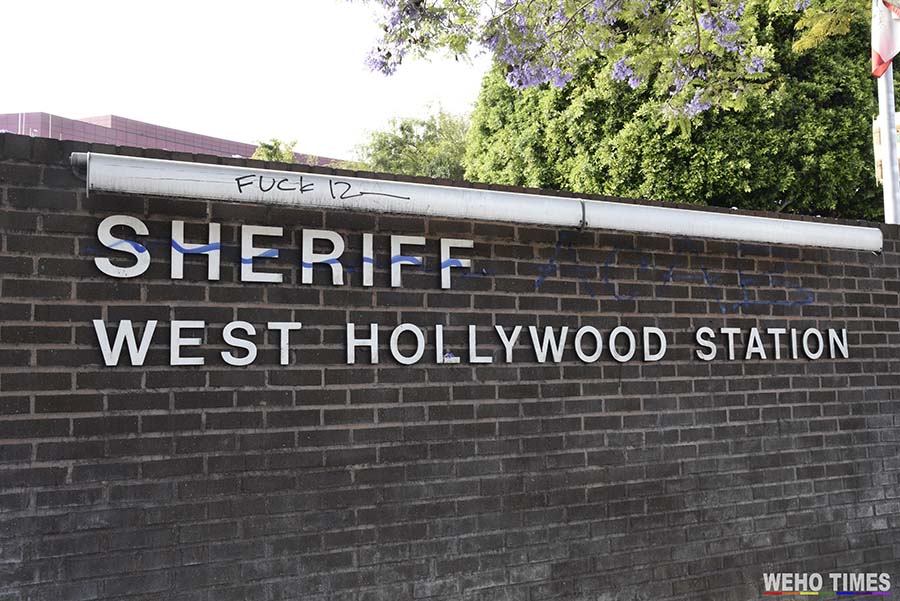 Overall the city was not heavily hit by the rioting, even though sadly, some businesses were looted. There were no reported injuries to any West Hollywood residents from yesterday’s civil uprising in the calls for justice for the murder of George Floyd.

Multiple businesses were vandalized throughout the city and some looted. Sheriff deputies made roughly 30 arrests for burglary, vandalism, and curfew violations according to a Facebook update by John D’Amico. There were no structure fires and there were no reported injuries to LASD Deputy Personnel and no patrol vehicles were damaged during the protest. There will be additional Deputy Personnel from the Sheriff’s Department to supplement West Hollywood’s Patrol function.

The City has implemented another Executive Emergency Order establishing a West Hollywood curfew that will continue to be in effect tonight, which has been updated to go into effect Sunday, May 31, 2020 at 6 p.m., ending at 6 a.m. Monday.

“No person shall be upon the public street, avenue, alley, park, or other public place or
unimproved public realty.” This curfew will remain in effect until such time as it is
lifted. This curfew is consistent with curfews in the City of Los Angeles and City of
Beverly Hills, which neighbor the City of West Hollywood.”

The Los Angeles County Sheriff’s Department continues to monitor the situation and will provide education and enforcement regarding the curfew. Emergency Executive Order 2020-5 is available on the City’s website at www.weho.org/home/showdocument?id=46429.