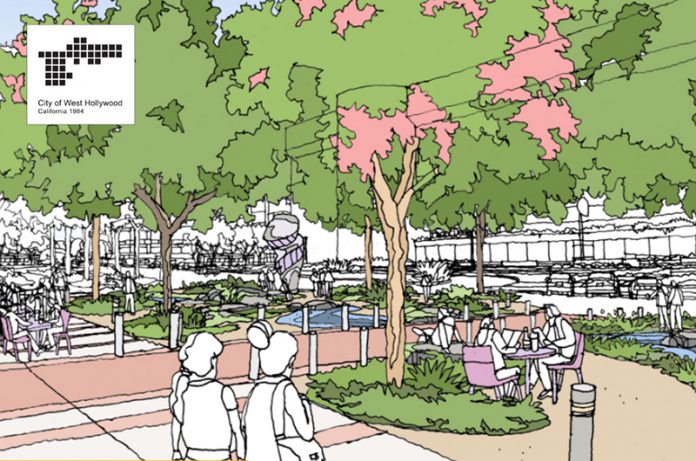 The City of West Hollywood is restarting efforts to engage community members with a Melrose Gathering Place Community Conversation on Thursday, September 29, 2022, from 6 p.m. to 7 p.m. on the Respite Deck of the West Hollywood Park Aquatic and Recreation Center (Floor 5 at the top of the grand staircase), located at 8750 El Tovar Place, next to the West Hollywood Library.

The space at the corner of Melrose Avenue and Norwich Drive is currently sidewalk and diagonal parking. It will be transformed into approximately 7,200 square feet of park-like space with landscaping, trees, seating, public art, and other amenities. The previously proposed design for this space is now being reimagined, and the City is excited to restart the effort with a new design team, artist, and with renewed input from the local community. The Community Conversation will be an in-person opportunity for neighbors, local business owners, and residents’ associations to meet the newly commissioned design team early in the process and participate in reimagining the space.

The Melrose Gathering Place project was established as part of the Design District Streetscape Master Plan, which was unanimously approved by City Council in 2014. The Design District Streetscape & Undergrounding Project is now in its second phase of construction. The Master Plan was designed to improve the overall aesthetics and mobility of the commercial district known as West Hollywood Design District, with the goal of strengthening the economic vitality of the district. Key features of the project include pedestrian and bicycle safety improvements; new pavement and sidewalks; distinctive trees and landscaping; upgraded street furniture and streetlights; smart city infrastructure installation; utility undergrounding work; and the creation of new public gathering spaces, such as the Melrose Gathering Place, with integrated public art.

With street and sidewalk modifications come opportunities to create new spaces that did not exist before in West Hollywood Design District. The proposed public gathering places will contribute to the district’s identity and sense of place. These spaces can be inhabited on a daily basis and for special programmed events. These gathering places, like all streetscape elements identified in the Master Plan, will be designed at a later date and may be designed and constructed separately from sidewalk improvements. The purpose of this Master Plan is to identify potential locations for gathering places. The character, elements and programming of each will be determined when they are designed, similar to the process that occurred on Santa Monica Boulevard.