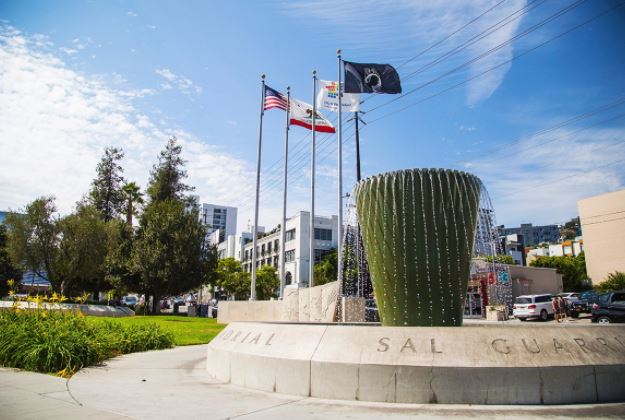 Save the Date! The City of West Hollywood will host a ceremony to honor veterans and active members of the U.S Armed Forces during its annual Veterans Day Program on Saturday, November 11, 2017 at 11 am. The ceremony will take place at the Sal Guarriello Veterans’ Memorial, located on the corner of Santa Monica Boulevard and Holloway Drive.

Members of the community are all invited to join City officials, City staff members, and representatives of the West Hollywood Sheriff’s Station and the Los Angeles County Fire Department in honoring our local veterans. This year’s theme is “Transgender Individuals in the Military.” During the program, members of the West Hollywood City Council will recognize those who have served in the United States Armed Forces. Representatives from local veterans’ organizations and the UCLA ROTC Air Force Color Guard will participate. Marsha Evelyn Morgan will speak in support of transgender individuals in the military. Morgan served in the U.S. Navy for six years, including two six-month deployments to the Persian Gulf for Desert Storm and Desert Shield, attained the Rank of E6, and served on the Nuclear-Powered Fast-Attack Submarine USS Topeka SSN754 as a Sonar Technician.

The community event is free and open to the public. In the event of rain, the ceremony will be moved to West Hollywood City Hall.