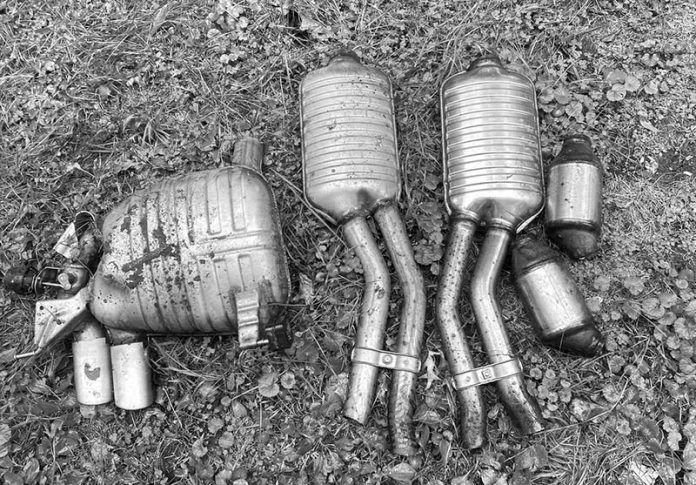 The Los Angeles County Sheriff’s Department’s West Hollywood Sheriff’s Station is hosting a catalytic converter etching event in West Hollywood on Wednesday, May 25, 2022, at the Pacific Design Center (PDC) located at 8687 Melrose Ave. The event will run from 4 p.m. to 8 p.m..

Vehicles will enter the PDC from Melrose Ave., and the etching will take place in the loading doc area.

To schedule an appointment for this event, please contact Deputy Salgado at desalgad@lasd.org or by phone (213) 420-7493.

A catalytic converter is a device that uses a catalyst to convert three harmful compounds in car exhaust into harmless compounds.

The three harmful compounds are:

Carbon monoxide is a poison for any air-breathing animal. Nitrogen oxides lead to smog and acid rain, and hydrocarbons produce smog.

In a catalytic converter, the catalyst (in the form of platinum and palladium) is coated onto a ceramic honeycomb or ceramic beads that are housed in a muffler-like package attached to the exhaust pipe. The catalyst helps to convert carbon monoxide into carbon dioxide. It converts the hydrocarbons into carbon dioxide and water. It also converts the nitrogen oxides back into nitrogen and oxygen.

All over the country, SUVs and trucks are becoming targets for opportunists looking to cash in on the valuable precious metals used inside catalytic converters. A standard catalytic converter contains several hundred dollars worth of platinum, palladium and rhodium. The ground clearance on trucks and SUVs makes for easy access to the converters, so all a thief needs is a reciprocating saw and about 60 seconds. This trend has police on the lookout in many parts of the country where this kind of theft has been a problem. Police caution SUV and truck drivers to park in busy, well-lit areas.