WeHo Sheriffs Accused of Transphobia During Arrest of Trans Woman 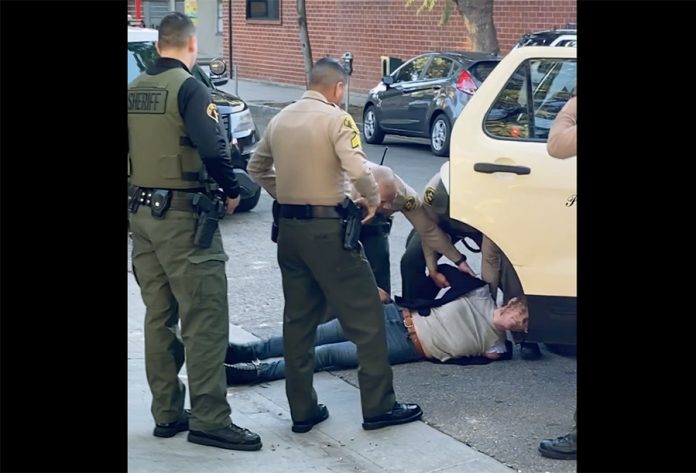 Some Trans activists are expressing outrage and are calling out the West Hollywood Sheriff’s Department for allegedly using excessive force during the arrest of a transgender woman on Wednesday, December 7, 2022. Annie Jump Vicente, 31, a former employee of Los Angeles City Councilmember Mike Bonin’s office, was arrested for obstructing deputies from entering the apartment complex she resides in while deputies were responding to an alleged domestic violence call from a neighbor. She says transphobia was the root of her arrest.

A video of the arrest is currently getting attention on social media. Outgoing West Hollywood council members John D’Amico tweeated that he would look into matter after being tagged with the video.

🚨TRANSPHOBIC POLICE VIOLENCE🚨#WeHo Police brutalized and arrested a trans woman after attempting to enter an apartment without a warrant.

They threw her on the ground multiple times and misgendered her before taking her into custody.

According to a report on Knockla.com, West Hollywood Sheriff Deputies responded to a domestic violence call the previous night. Vicente alleges the deputies did not take a statement from the victim. Vicente admitted she would not let the deputies enter the apartment building without a warrant and directed them to call the landlord’s phone number.

West Hollywood Sheriff’s said via a statement that “a use of force occurred and the female was arrested for obstructing the Deputies in the lawful course of their duties.”

In the video, Vicente is heard screaming that she was misgendered as “him” during the arrest. The video by Vicente’s roommate Mariah Darling, captures her on the floor face down with her wrists handcuffed behind her back. Knocked LA reports that she was forced to the floor and allegedly knocked her head on the wall. She was handcuffed and carried out onto the street.

Vicente was taken to the hospital to check for injuries. She was returned to the West Hollywood sheriff’s station for booking and was released later that night. She posted photos of her wrists which are visibly red from bruising.

LASD told Knock LA that they will be presenting charges against Vicente to the Los Angeles district attorney’s office. The DA tells Knock LA they have not received charges as of the posting of their piece.

Vicente has returned home and is planning to continue to speak out about her experience and call for accountability.

“I believe that we can work together to have a better future … not enough people stand up to brutality,” she told Knock LA. “I’ll speak out, and I want to encourage others to do so and to stand with me.”

The West Hollywood Sheriff’s Station recently partnered with the Federal Bureau of Investigation (FBI), for a briefing of the Pulse Nightclub shooting, one of the deadliest mass shooting incidents in the nation’s history to address LGBTQ safety in West Hollywood.

The presentation took place on Thursday, December 8th, the day after Vicente’s arrest. The briefing was conducted by a terrorism expert from the FBI that covered information leading to the attack, the aftermath, and lessons learned.

The complete statement from the West Hollywood Sheriff’s Station regarding the incident reads as follows:

Deputies were then able to go to the apartment where the alleged domestic violence incident was occurring. Deputies contacted a male, who was home alone.  He said his girlfriend had not been there for a couple days.  A protective sweep of the location was conducted and no one else was located in the apartment.

West Hollywood Station Detectives are in the preliminary stages of their investigation. The investigation is ongoing and there is no additional information available at this time.

If you have any information related to this incident, you are asked to contact the West Hollywood Station at (310) 855-8850 and speak with Detective Huezo. If you prefer to provide information anonymously, you may call “Crime Stoppers” by dialing (800) 222-TIPS (8477), use your smartphone by downloading the “P3 Tips” Mobile APP on Google play or the Apple App Store or by using the website http://lacrimestoppers.org

Wow, interfering with a non related 911 call. She should have been arrested as she was, and I hope fully prosecuted. Anyone familiar with the train wreck of past supervisor Mike Bonin however should not be surprised that this is the actions of one of his staff.

The knocked LA article is shock full of misinformation. They were not trying to enter her home without a warrant. They were entering the building in response to a 911 call. The person was not hog tied and carried out into the street. Her feet are visibly not shackled in the video. And they failed to produce a photo with “deep welts” on her wrists. All we see is some mild discoloration which was most likely self inflicted. And this article doesn’t mention him by name, but of course Jordan David is behind it all. That guy thrives on drama… Read more »

I’m curious to know if the Sheriffs can lawfully enter the common area of an apartment building, w/o a warrant. I researched this, and the results seem inconclusive. I’m not sure that entering a common area is the same as entering one’s dwelling unit. I’d also like to know if Ms. Jump intervened before they attempted to use the call box, or if she intervened when they tried to enter the property, w/o one. And I’d like to know if this was a follow up to the previous call, or if this was a new call for help, in which… Read more »

If someone calls the police for help, they have every right. The interloper should be sued by the person calling for help because that help was delayed due to interference by that uninvolved party. (if they suffered more harm by the interference and the delayed response).

EXACTLY my thoughts. Give me a break. The whole thing is so stupid. She is going to put on a show at the next City Council Meeting.

You want to work for a better future….don’t interfere with the Sheriffs duty. This person had nothing to do with this situation. This person had no right to block deputies from entering the building. And when you resist arrest, getting bruised wrists is on you. Stop blaming your bad, unlawful behavior on you being trans. Get over yourself. (this victimhood thing is really getting old).

Exactly! Imagine if someone was beating the snot out of you and a self-appointed busy body decided to get in the way of the police, delaying your rescue.

the person being arrested sounds like they need to be on medication.