“The City of West Hollywood Honors the many men and women who made the ultimate sacrifice in service to their country” reads a banner at the Sal Guarriello Veterans’ Memorial located at the intersection of Holloway Drive and Santa Monica Boulevard on Memorial Day 2021.

“Today, we remember those who gave their lives in service to our country, as well as their families, friends and loved ones who keep their memory alive,” posted West Hollywood Mayor Lindsey Horvath on her instagram account.

The City of West Hollywood has suspended parking enforcement in recognition of the national holiday on Monday, May 31, 2021.

Approximately 7,000 square feet of landscaping such as Redwood and Laurel trees, grasses and shrubs highlight the park, along with benches and decomposed granite walkways. A water feature element is currently under construction and reinforces the intended purpose of the Memorial as a place of honor and remembrance. The design of the Water Feature depicts the rising and falling of cascading water over the brim of an eight-foot tall inverted cone-shaped element into an awaiting water basin.

Memorial Day began as “Decoration Day” to celebrate Black Liberation on May 1st, 1865 by newly liberated Blacks in Charleston, South Carolina after the Civil War. Years later African American significance was erased from the event by white southerners and their supporters after they regained control of state politics in the Jim Crow period at the end of Reconstruction. History Professor, David W. Blight, covers this in his book Race and Reunion: The Civil War in American Memory. Modern whitewashed Memorial Day is now a patriotic promotion of American imperialism and white supremacy. Celebrate the original “Decoration Day” by marching with Black… Read more » 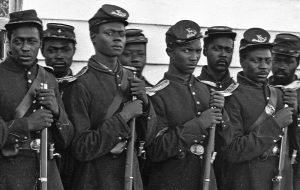