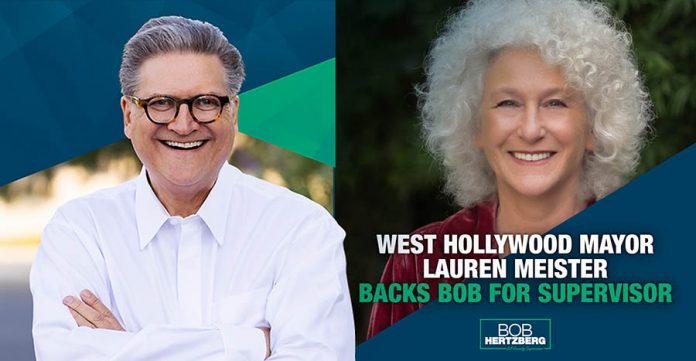 West Hollywood Mayor Lauren Meister has endorsed Bob Hertzberg in the race for District 3’s Los Angeles County Board of Supervisor in the November 8 general election. In her endorsement, Mayor Meister took some swipes at his opponent and her colleague, West Hollywood Council member Lindsey Horvath, questioning her maturity, experience and judgement, especially around public safety.

“I’m endorsing California Senator Bob Hertzberg because of his maturity and
his years of experience as a legislator, a Senate Majority Leader, and public
servant. As a State Senator, he represents a constituency of one million people
and is responsible for a $300 billion budget. This is significant when you
compare it to his competitor, my colleague, who represents only 37,000
people and a city budget of just $100 million.

Senator Hertzberg believes in working with both sides of the aisle to get things
done. His competitor has a ‘my way or the highway’ approach, which does
not allow for differing opinions or diverse voices to be heard and, oftentimes,
can be unproductive.

Lastly, the County’s budget is nearly $40 billion and priorities are important.
Senator Hertzberg believes that public safety must be a county priority,
whereas his competitor proposed cuts to Sheriff’s deputies in the City of West
Hollywood at a time when crime was on the rise. Yes, there are systemic
problems with policing that must be addressed. But let’s address them by
voting in a new Sheriff and improving recruiting techniques and training; not
by throwing out the baby with the bathwater.”

Lauren Meister is perfectly on target.
No to Horvath.

Thanks, Lauren! You are heroic.