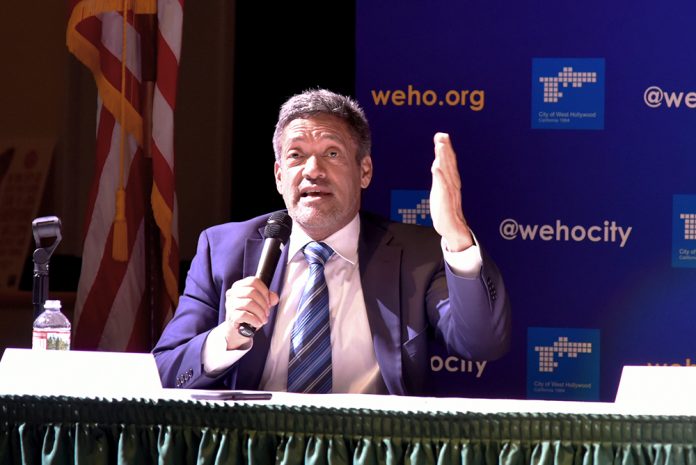 Below is a statement from West Hollywood Mayor John Duran, dated March 19, 2019. It was written while the Mayor continues his stay at Cedars Sinai, where he is being treated for blood clots. The statement will be read at tonight’s West Hollywood City Council Meeting, scheduled to begin at 6:30pm.

To my community and colleagues in West Hollywood:

First – thank you for all the kind wishes regarding my health. This has been a challenging week dealing with the blood clots in my legs and the threat that they posed for me.

I am truly sorry for the place where we find ourselves today. A House Divided against itself – can not stand. Those are the words of Abraham Lincoln after a civil war that pitted family member against family member. And that is how this feels as long time community members pick a side while others wish it would all go away.

I have been taught to always look for my part in any dilemma. I have to identify my part in the situation and own it.

I am always quick with a punch line or a joke. Humor is my defense mechanism. I often say things that some people say are off color, ridiculous , racy or bawdy. People laugh or stammer. Some cringe. Some wish I wouldn’t. But it is who I am and when I say something improper – I am always quick to apologize if I went too far.

It seems to me that the current angst has been created by things I have said – one comment sounding to some as racist – and other comments as sexually inappropriate and beneath the dignity of an elected official.

The comment I made about an Asian-American man who made accusations against me recently in the Los Angeles Times, was not meant to single out his race. It was a rude and hurtful comment about someone’s appearance and for that I owe him and the community an apology. Some of you know that my family is composed of mixed Latino and Asian heritages. My sister married a Filipino-American and my nephews and niece are beautiful mixed race Latino and Asian. My nephew married a Korean-American woman who is presently pregnant with their first son who will be mixed Asian, Latino, and white. I don’t have any racist feelings towards my own immediate family or anyone else. But my words spoken in anger and haste were wrong – and for that I am truly sorry and I would like to apologize to anyone I may have offended.

The issue of sexual harassment at the Gay Men’s Chorus was initiated by a local blog who took an internal matter at a non profit where I sing with 280 other men and decided to print a story with only partial information.

In my 20 years at GMCLA , there has been only one claim filed against me. That occurred 5 months ago by a member who claimed I touched the waist band of his underwear in an inappropriate way.
I have still never met or spoken to this person. The chorus hired an independent investigator who interviewed him, me and the 5 other witnesses in the immediate vicinity who said nothing occurred. This was in a common dressing area with 150 men putting tuxedos on. Not one person could substantiate the person’s claim while there were 5 bystander eyewitnesses who told the investigator that they did not see anything occur. That claim was found unsupported and was thus closed.

The second claim was about something I said that was vulgar and inappropriate to a fellow singer 4 years ago. When it happened , I apologized to him for my comment. He did not wish to pursue the issue further and the comment only came to light now as part of the LA Times Story.

The third supposed claim has never been filed with the chorus, despite repeated requests that he do so. This is a person with a personal grudge against me who has chosen to attack me in the press, but yet to file a formal complaint with the Chorus against me so due process could be followed.

That’s it. One claim unfounded. One claim on vulgarity 4 years ago not pursued after my apology. And one claim never filed. Out of that – came a misrepresented narrative that I was “sexually harassing chorus members.”

I flirt. I crack dirty jokes. I often say things that make some cringe. But I do not threaten or physically assault anyone. Not ever. It is not in my DNA. I will own my human flaws for being and saying inappropriate things. But I will never admit conduct that never occurred. That would be dishonest and done for expediency rather than truth.

Unfortunately, people are now piling on a false narrative that is untrue, misunderstood, and driven by the current mood of the country rather than the rule of law and due process.

It is the sin of Salem. Admit that you are a witch – and you will be an ostracized pariah separated from the community. Deny that you did it – and we will burn you at the stake publicly and impose a sentence without investigation or verdict.

Sexual harassment is a serious issue and every accusation must be received and taken seriously. But pending investigation and process, opinions and reactions should stand in abeyance until truth is revealed. Judging someone guilty by accusation is NOT a progressive value. It was a past political condition that extended from the Inquisition to Salem that was such an affront to justice – that the Founders put a due process clause in the Fifth Amendment to the US Constitution.

It is time for a little less heat and a little more light. If we are demanding transparency and process as community core values – than we must extend and exercise those values with patience and forbearance. Or we subject ourselves to the rule of the the mob over justice.

my name is hee young noh(62y korean). I was framed by corrupted LAPD and got jailed(2014). Without meeting John Duran who claimed He has 30y experience in criminal defense, furthermore, He said he is a public figure as weho’s council member. I was semi-terminally ill(AIDS,hep C,diabetes, heart failure etc) with major depression, I gave my credit card, he charged $5000, However, No Work /Communications done , NO SHOW on a hearing date. I got convicted on LAPD corruption case. Mr.Duran also sent an email to my adversity attorney with a content that I was/am mentally ill. Therefore, Choosing him for… Read more »