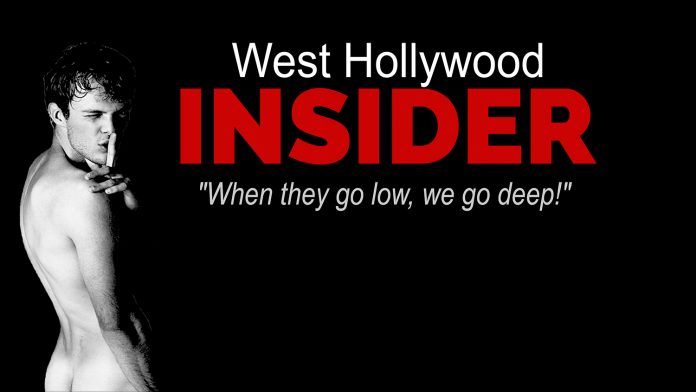 The rainbow City of West Hollywoodland has within its spectrum all the makings of an old-fashioned Hollywood-style media Feud.

There’s now enough cattiness and media malice in West Hollywood to make Hedda and Louella—or maybe I should say Bette and Joan as proud as the month of June.

Though I hesitate to elevate his standing, I must say that based on his mendacity in words and his malice in actions, a pompous hack named Henry “Hank” Scott considers the business of news in WeHo to be his domain, and his alone.

“Hack” is far kinder than the name to which Henry “Hank” Scott, the publisher of a hyperlocal West Hollywood media site, refers to this WeHo Insider, yours truly.

A week before the launch of WEHO TIMES, I invited Scott over to my home office (just down the hall from his own) for a friendly cup of coffee and courtesy intro to our publication.

In a completely collegial tone, I told Scott that I believed one person should not control the narrative in any city, and especially not in a city like West Hollywood. A singular voice without occasional dissent or diversity of opinion is, well, dangerously Trumpian. Such a status quo is certainly not what we are all about in WeHo.

Clearly, my spirit of cooperation was not appreciated nor is it shared by Scott, as evidenced by what ensued with James Mills, a friend and respected freelance writer.

Mills is well known in the community and had accepted an assignment from me to conduct an interview and write a feature, titled “WEHO TIMES Local Hero” profiling a lieutenant and 31-year veteran of West Hollywood’s Sheriff’s Station.

The story was to appear as part of our debut. I mentioned this to Hank Scott during our initial and only meeting about WEHO TIMES.

Three days later, Mills telephoned to say he could not continue with the assignment as he received a call from the Henry “Hank” Scott. “Henry said he would not be pleased if I wrote the feature for WEHO TIMES, so I have to withdraw,” Mills told me. Scott’s intimation was clear: If Mills hoped for any future freelance work from him, even a crumb, then he’d better not write for the competition. This resonated as intimidation—a thinly veiled threat to Mills being blacklisted as “freelancer non-grata” by the would-be media (ahem) mogul, Mr. Scott.

Astonished by such proprietary, petty hanky-panky, I emailed Scott asking him for a one-time pass. Surely, he’d “allow” Mr. Mills to write the piece without retribution. To me this wasn’t about competing publications but the chance to pay tribute to a much-loved deputy sheriff, a man who had served our community for over three decades, a hero who should not go unsung.

Surely pleading not for Hank Scott’s “permission” to run the content at WEHO Times, but rather to his sense of fairness for the freelancer and for the subject, we could find common ground. Surely despite seeing things from “competing’ publishers’ perches, we could still work to make a better West Hollywood community.

Scott’s response to me was direct and his purpose clear: He didn’t give a shit about the subject.

In his email, Scott stated: “As you will learn getting into this media business, competing publications never share the same freelance writers.”

I might have suggested that Henry Scott google search the terms, “freelance definition.” The first result reads: “Freelance: working for different companies at different times rather than being permanently employed by one company.

It goes without saying that Scott’s definition, be that as it may, contradicts the entire concept of being a freelance writer. But there you have it: the upside-down world according to Hank Scott.

“People have shared with me posts from you that say you’ll be covering news and politics, which is what WEHOville.com does. That is competition… I do not support or promote my competitors.” Scott went on to say.

Ok, got it. I’ve been put on notice. Scott has thrown down the gauntlet and I heard the sound hitting the inside of my screen, reverberating right through my laptop loud and clear. He does not want anyone eating out of his bowl. He considers news and politics in West Hollywood to be his personal red meat, there for him to digest and disseminate in his own special way.

Earlier I stated that “hack” would be kinder than the way in which Scott has referred to me. Let me explain.

After James Mills withdrew, I personally wrote the “Local Hero” feature about the beloved deputy and decided to announce it during the Public Comments portion of the next West Hollywood City Council Meeting.

As I walked into that meeting, a prominent media professional approached me and put his arm around my shoulder, ushering me back out to the waiting area.

Yes, I am Scott’s apartment manager. When he was waging his private war with the Mondrian Hotel over noise issues and wanted to move out of his previous pad, I leased Scott his current apartment just two doors down the hall from me.

Just this month Scott emailed a domain-hosting company attempting to have our site taken down. Of course the company found no merit in the request.

More “Feud! Media Malice in Weholand” to come…only from this West Hollywood Insider.

WeHo Confidential Rises from the Dead

There haven’t been any casualties reported since November of last year so if you thought a stake might have been driven through its heart as the beast, think again!

The controversial West Hollywood Gossip site, WeHo Confidential launched in 2010 is alive and biting with fresh victims since July 12th.

Many touted it as vitriolic and claimed they never visited, but a check of their browsers might prove different.

“We love dishing the dirt, and you love reading it! Conceived by two power gays who die for gossip, sex, drugs and rock ‘n roll, this website is your one stop shop for all the goings on and who’s who in West Hollywood” the site boasts.

With recent posts like “West Hollywood Makeup Duck, Lucas Dell, and rude ass piece of shit, Christian Burns, who we would still bang, got into a Twitter war today in a fight for biggest bottom” … It’s clear that WeHo Confidential’s fangs are as sharp and lethal as ever.

Welcome Back! I guess?

Another New Hyperlocal West Hollywood Site is About to Debut

A well-known West Hollywood resident, community activist, former City Council candidate and casualty of the late Council Deputy System is launching a new online resource for places to go, and things to do in West Hollywood with a smattering of news and political insights.

I previewed some of the upcoming features and the content offers informative, sexy and savvy insights into life in West Hollywood. The publisher of the new site claims his offerings will be directed more towards Nightlife and Entertainment and not as “newsy” as existing sites.

The launch will coincide with the publisher’s birthday party later this month at Micky’s and I will be going, (not sure if Hank will attend.)

So, cheers and good luck!

The more the merrier in the Rainbow City because we think West Hollywood is much more than a “Ville.”

Let Them Eat Steak but Not Here…Le Relais de l’Entrecôte, the French Bistro on Melrose has Closed

Opened a little over a year ago in March 2016, this classy French import across from Cecconi’s on Melrose and Robertson pulled out of West Hollywood this past June about the same time that  Trump pulled out of the Paris Climate Agreement, but we’re pretty sure the two are not related.

This Parisian import with outposts in Paris, Geneva, NYC and Dubai sadly over-estimated LA diners’ appetite for steak frites and their signature sauce. Opening without much fanfare, they were closed with nary a whisper before Bastille Day.

No one could be reached for comment as the website is down and the phone is disconnected.

Can A Rounderbum Make it in West Hollywood

Rounderbum,  the padded underwear retailer is opening soon on the corner space that formerly housed American Apparel at 802 San Vicente, on the Corner of San Monica Blvd.

American Apparel closed their WeHo location in 2016 shortly before the company was sold in a bankruptcy auction to a Canadian Company for $88 million according to the LA Times.

Founded in 2009, Rounderbum specializes in butt enhancing padded underwear for men and women. According to their site the underwear “Lifts and gives volume to the buttocks with its integrated technology” and “Gives more gluteal volume and definition.”

Your source for the hottest gossip, juiciest rumors, sightings and pop culture news in West Hollywood.

Look for our regular column every Tuesday.