West Hollywood city leaders gathered with community members Sunday evening for a candlelight vigil to mourn the loss of life in a mass shooting at Club Q, an LGBTQ nightclub in Colorado Springs Colorado. The gathering took place in front of Rocco’s WeHo on the corner of San Vicente and Santa Monica Boulevards, before a scheduled Transgender Day of Remembrance ceremony at the City’s Council Chambers/Public Meeting Room.

The event was led by West Hollywood Public Safety Commissioner Jackie Steel. Speakers took turns to express heartbreak, outrage, anger and made calls for unity against gun violence and demanded change in front the the rainbow crosswalks while music thumped from busy local bars down the street.

“It is so sad that this has become a way of life in our country,” said West Hollywood Mayor Lauren Meister. “We are working with our law enforcement and our businesses to heighten awareness and increase preparedness to ensure the safety of our community. West Hollywood is and will always be a safe haven for the LGBT community… we have to fight the hate.” 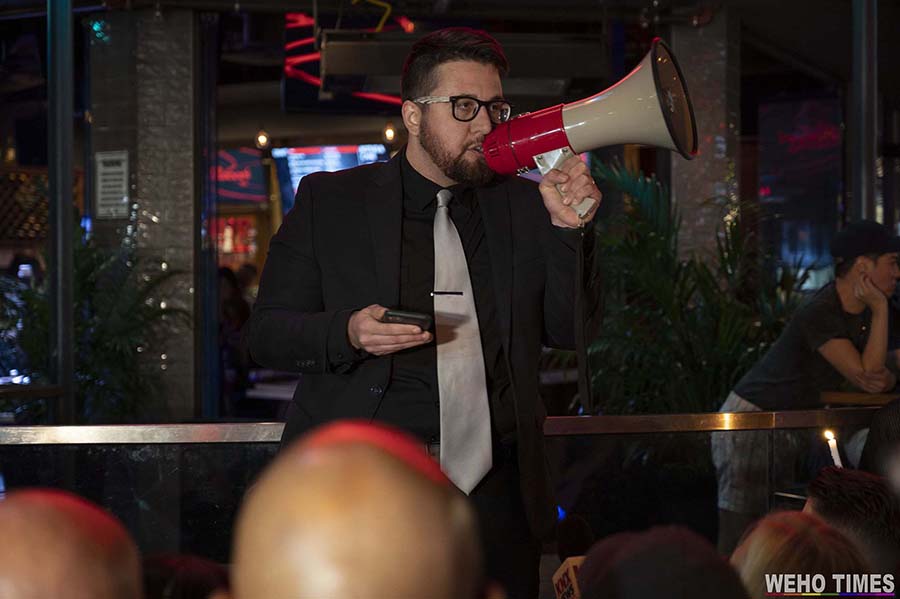 Newly elected Sheriff Robert Luna made a surprise appearance at the vigi in support of the LGBTQ+ community. Luna spoke about making a commitment to keep the LGBT community members safe at the vigil.

“I lost a person today,” said Transgender Advisory Board Member, Luckie Alexander Fuller referring to 28-year-old transgender man Daniel Aston who died in the attack. “I didn’t know him person, but we shared something in common. He was a trans man and I’m tired of seeing my trans siblings die. We have to fight. We have to get them to stop…be who you are should not be that hard.

News of the Club Q mass shooting came as the City of West Hollywood and its Transgender Advisory Board recognize November as Transgender Awareness Month, and as the City prepared to host an in-person Transgender Day of Remembrance Ceremony last night featuring a reading of names to memorialize people who have been murdered as a result of anti-transgender violence.

This weekend’s mass shooting, for many in the LGBTQ community, also carried echoes of the June 2016 Pulse nightclub shooting in Orlando, Florida that left 49 people dead, 68 people injured, and countless other lives affected. That shooting became known as the site of the deadliest mass shooting in US history, as well as the deadliest incident of violence against LGBTQ people in the nation.

Many of those who attended the vigil walked to the City’s Council Chambers/Public Meeting Room and stayed for Transgender Day of Remembrance ceremony.

The City of West Hollywood is working with the West Hollywood Station of the Los Angeles County Sheriff’s Department and the Block by Block Security Ambassadors program to expand patrols in the City’s Rainbow District. If you see something, say something: anyone with safety concerns is urged to contact the Sheriff’s Station 24/7 at (310) 855-8850 or, in an emergency, always call 911.

Could not believe that was Robert Luna in weho. When was the last time you saw Villanueva speaking for LGBT rights? I don’t think ever.