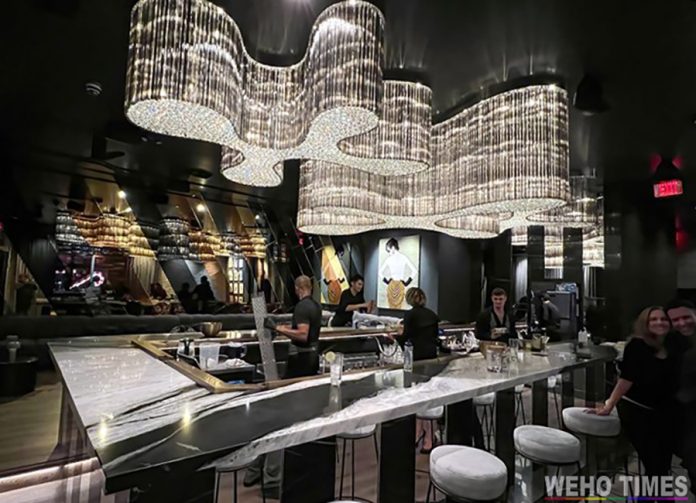 The City of West Hollywood welcomes a new gay bar. OR Bar WeHo, located at 8228 Santa Monica Blvd., is having a soft opening this week on Thursday, December 15, 2022, from 6pm-12pm. Co-owner Stephanie Schestag, tells WEHO TIMES there has been no press release announcing their opening and that they may stay open later “depending on how the night goes.”

The highly anticipated reincarnation of the former Gold Coast Bar space had a soft opening earlier this week. On Wednesday night, the owners hosted a special preview for friends and family who had a first hand experience of the space.

Fashion Police co-host George Kotsiopoulos teamed up with Circus of Books owner Rob Novinger and Fire Hot Yoga founder Schestag, to open the new gay bar that literally means “Gold” in French–a nod to the beloved Gold Coast space which closed for good in September 2020 after serving the community for 39 years.

According to Novinger, they were hoping to open in early September, but there were engineering and supply chain issues that delayed their opening by roughly three months. “Believe it or not, we’re not waiting on anything from the city,” Rob Novinger said back in August. “In West Hollywood, they’ve been really good with working with us. They want new business. They welcome new business. They roll out the red carpet. In LA, it’s like three or four months to get approved. West Hollywood had everything approved within two weeks.”

He said equipment that was ordered in January of this year had been held back even though they were manufactured in the U.S. He hoped the bar would open by Labor Day, but instead, they are opening in time for the holidays and the upcoming New Year’s Eve celebration.

The new West Hollywood bar has been completely revamped and hopes to cater to a more upscale clientele. It is being billed as a gay bar by the owners who have acknowledged the history of the space and are not shying away from the cruisy reputation of the infamous Vaseline Alley located in their backyard.

“We don’t want gay bars to become obsolete,” Kotsiopoulos told Variety when he announced his latest endeavor last year. “We’re passionate about making sure we still have safe places for community.”

The place has Tom Ford @ Gucci style with Hermes prices!

What are the hours? Please open early.

As long as it has dive bar prices and drinks, it should do well.

Is OR really a gay bar for men and lesbians or is it a queer, trans, BIPOC for bridge and tunnel crowd?

The instant I saw the words “gay bar” I knew someone was going to call them out for not being inclusive. Do you honestly believe they are not queer, trans, BIPC because they call it gay? Gay used to be all encompassing. I’m so sick of the policing of language that demands special spaces for special cases. It’s a gay bar! All are welcome. Well, in this case, all with money are encouraged.

Does anyone notice how people will complain about ANYTHING in this city? Whether it’s a new restaurant, gym, bar, or whatever. They will find a reason to complain.

I didn’t complain..just made an observation (if you don’t know the difference, look it up). We are oversaturated with bars. But they did a nice job and I wish them luck. Now go about your day and move on.

The one thing this city DOES NEED is a new beautiful bar!

yes, desperately needed. Thank God they opened. Hallelujah! Now, instead of walking 50 feet to find a bar, I only have to walk 10.

The one thing this city does NOT need is ANOTHER BAR…but at least they fixed up the place and made it pretty. Best of luck to them. Congrats.

ABOUT US
WEHO TIMES West Hollywood News, Nightlife and Events. The WEHO TIMES is an online news source covering the life and times of the City of West Hollywood. Featuring unbiased professional reporting and photo journalism, WEHO TIMES is updated daily, delivering the latest city news. The online publication founded in 2017, also features cultural events, people, politics, places, nightlife, and the history that make the City of West Hollywood the unique, creative city we all know and love.
Contact us: editor@wehotimes.com
FOLLOW US
© 2023 Murillo Media, LLC
wpDiscuz
16
0
Would love your thoughts, please comment.x
Comment Author Info
Report this comment