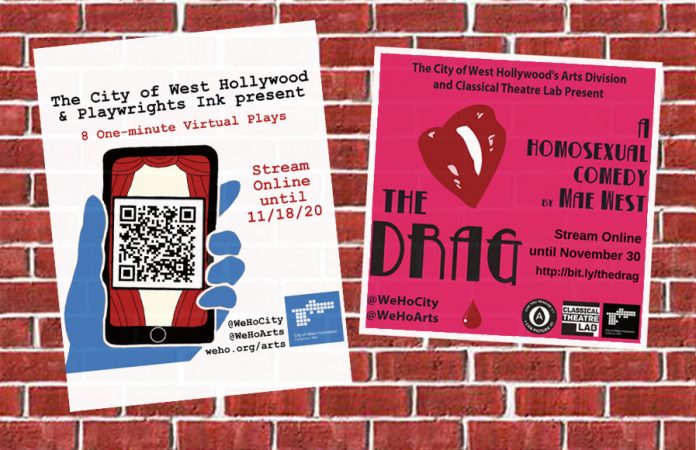 City of West Hollywood has extended its Virtual Theatre experience. The streaming presentations of Classical Theatre Lab’s The Drag by Mae West, and Playwrights Ink’s While You Wait, will run through Thursday, December 31, 2020. Feedback on these virtual theater experiences have been positive from community members and local businesses, so the programing will continue by popular demand.

Playwrights Ink, a collaborative of eight Southern California playwrights with more than 100 local and national productions to their collective credit, brings While You Wait to patrons in West Hollywood waiting in line at local businesses.

While You Wait offers the West Hollywood community bite-sized virtual theatre experiences by presenting eight one-to-two-minute mini-plays, monologues, and animations, all examining the theme of waiting. Viewers will be able to connect to the videos by pointing their cell phone cameras at QR codes placed as stickers or banners at businesses and parks throughout the City while they wait in one of the many lines that are part of daily life during the COVID-19 pandemic as businesses seek to ensure social (physical) distancing by limiting occupancy.

With theatre audiences unlikely to gather in shared spaces for many months, While You Wait serves as a playful reminder that the show must go on(line) by taking theatre to people on the streets where they work, shop, and play.

While You Wait videos will also be available to view online through at www.weho.org/arts or http://bit.ly/wehoartstheatre. They are offered to the public free of charge with donations accepted at www.classicaltheatrelab.org.

Classical Theatre Lab is a nonprofit organization devoted to exploring theatre, literature, and performance. It brings a costumed online reading of The Drag by Mae West to life.

The Drag, subtitled A Homosexual Comedy in Three Acts and written by Mae West under the pseudonym Jane Mast before she became a blockbuster Hollywood star, is about the cost of living with a secret life. The Drag enthralled, but also scandalized, audiences in theatres just outside of New York City where it opened in 1927. The play’s portrayal of homosexuality and drag queens led to authorities shutting down performances after just two weeks. The play never made it to Broadway, as Mae had hoped.

This Classical Theatre Lab reading features guest artists Kelly Mantle, Roger Q. Mason, and T. Ashanti Mozelle. A singer, songwriter, and comedian, as well as actor, Mantle guest-starred on RuPaul’s Drag Race among their numerous TV credits. An accomplished writer/performer, Mason penned and starred in Lavender Men at both Skylight Theatre in Los Angeles and Circle in the Square in New York. Mozelle can be seen in Trade, the 2019 feature film based on true story of a Los Angeles transgender prostitute.