The event provided booths from various trans organizations and other non-profits offering literature and various information in the main lobby of the hotel.

The ceremony began with a performance by the Trans Chorus of Los Angeles, followed by a blessing from Yuè Begay, a Prevention Training Specialist at APLA Health. 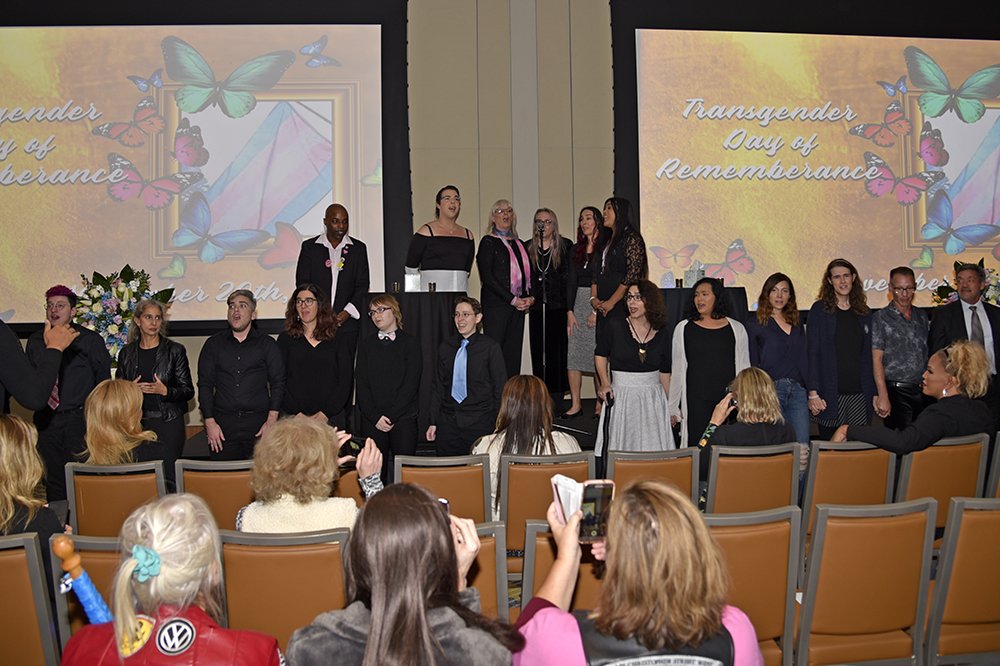 Duran spoke of Gwendolyn Ann Smith, a trans woman who founded Transgender Day of Remembrance after her trans friend, Rita Hester, was murdered two days before her 35th birthday on November 28, 1998, in Massachusetts. Hester was found in her apartment after being stabbed in the chest 20 times. She died from cardiac arrest as soon as she arrived at the hospital.

“What started in [Smith’s] living room has now become a night where community gathers, not only all over this country, but all over this world to remember those that we have lost in the previous year to hate in violence towards our members of the transgender community,” Duran said from the stage. “I have attended these for about 20 years… we were a rag tag motley crew on the corner of Crescent Heights and Santa Monica Boulevard, pulling together whatever we could to have a Transgender Day of Remembrance and look at us now. We’re in the Jeremy Hotel, in the light, on the Sunset Strip, not in the ghetto of the corner of San Vicente and Santa Monica Boulevard–not in the LGBT ghetto, but in a premiere hotel on the Sunset Strip. And that speaks about where we have come from, then until now.” 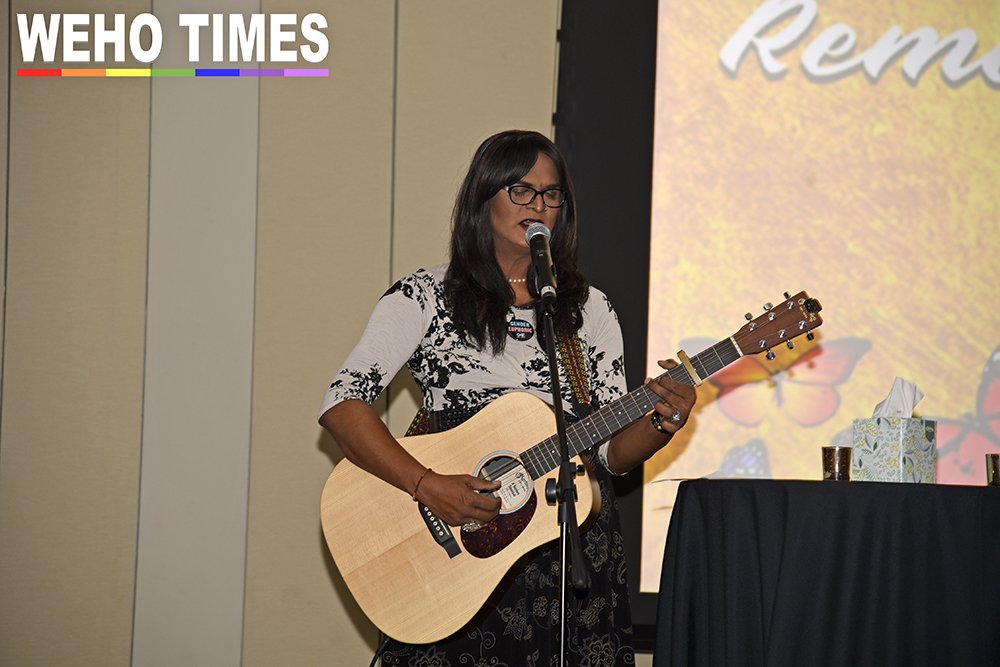 The event was filled with song and music, along with poetic reflections during the reading of the names of the trans lives lost this year.

The event also highlighted some cultural divide within the trans black and Latin communities. The majority of those murdered this year are trans women of color, but when Vicky Gutierrez’s name appeared on the screen, many people stood in honor of the the 33-year-old Latin trans woman who was fatally stabbed and set on fire inside her Los Angeles apartment at the beginning of 2018. There was supposed to be a special moment in honor of Gutierrez, with a brief slideshow highlighting her life, however, the images were rushed to read the following name, leaving those who stood for her looking baffled.

At the end of the reading of the names, Bamby Salcedo, the founder of the Los Angeles-based TransLatin@ Coalition and trans activist Maria Roman took the stage to speak on behalf of Gutierrez. 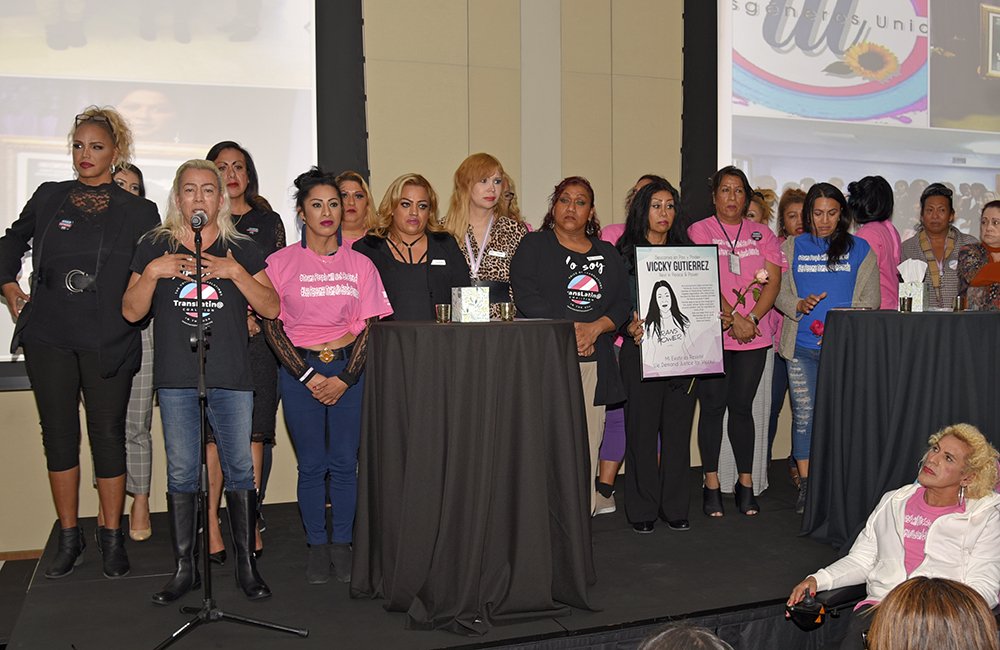 “It upset me that what was prepared for her was not accurate,” Roman told the room. “I’m trying to come from a place of love. Vicky Gutierrez volunteered her time at this day of remembrance. She’s not just a name… Vicky Gutierrez meant a lot to the people in this room and I want each and everyone of you to understand that. You can’t just read her name and move on to the next name.”

“As we know, personally, I don’t like Transgender Day of Remembrance, because it’s a sad day for me.” Salcedo added. “It depresses me, but I know it’s important that we celebrate and commemorate our lost ones and we want to acknowledge all of the beautiful and amazing people who are here and honor the people who we lost because of stupidity and ignorance that we continue to experience in this society. We want to give all of our love and solidarity to all of our black trans folks–to our black trans siblings, but we want to also ensure that the name Vicky Gutierrez does not just slide through. We want Vicky to be remembered for who she was, a beautiful, amazing young person who was dedicated, not only to the movement but also gave her love to people in spite of who that person was. We love Vicky. We want to show our love to Vicky, particularly at this event, in a way that she knows she is loved she’s not just going to slide through.”

Salcedo then asked everyone to join her in a unity clap. The crowd chanted “We are Vicky! We are Vicky!”

The Transgender Day of Remembrance ceremony closed with the Trans Chorus of Los Angeles singing a song outside The Jeremy Hotel, before everyone gathered for a unity march up and down Sunset Boulevard.

“The event is necessary, but I hate that it’s necessary,” MJ Brown aka Miss Barbie Q told WEHO TIMES. “The difference in the different races that are being targeted–it’s hard to generalize it. There is a huge factor of black trans people being killed. Hopefully it doesn’t divide us and it mobilizes us as a trans community to really get together and get our allies to come together. The event was beautiful. Poignant. Necessary. We need more of our LGBT community here. There has to be a reason we get to survive. We get to survive, we get to live, and we get to thrive.”

MJ Brown aka Miss Barbie Q came out as trans this past summer. They are widely known in the LGBT community as a drag performer and speaker/storyteller, event and radio host, producer, actor and writer. They are a member of the AHF Flux/LA Chapter
Outreach Coordinator for Los Angeles Centers for Alcohol and Drug Abuse – Project 90 and a proud ambassador for the Unique Woman’s Coalition, which brought the Black Trans Magic section of this year’s TDOR event.

“I’m very grateful that these events actually occur,” Jesse Medina said after the event. “It was great in terms of being able to recognize and identify the problem that we have in the transgender community, and also bringing to life all of our trans brothers and sisters and folks that we lost this year and over the course of history. Besides that, it also humbles me to know that I also have a privilege to still be here, being a part of the transgender community. I say, let’s forge forward and keep pushing for our rights.”

“I thought the event was powerful, however, there has to be intentionality in the reading of the names.” Maria Roman told WEHO TIMES. “We have to take a look at what the event means and how we can translate the lives of these people, because they are not just names.”

According to the Human Rights Campaign, 2017, was the deadliest year with at least 29 deaths of transgender people reported dead in the United States due to fatal violence, the most ever recorded. The transgender people lost in 2018 were either fatally shot or killed by other violent means. These victims were killed by acquaintances, partners and strangers, some of whom have been arrested and charged, while others have yet to be identified. Some of these cases involve clear anti-transgender bias. In others, the victim’s transgender status may have put them at risk in other ways, such as forcing them into homelessness.

For more on the Unique Woman’s Coalition (UWC), visit https://www.theuwc.org/