WeHo’s Rainbow District is LIT for the 2022 Holiday Season

Some West Hollywood nightlife businesses were LIT along the LGBT Rainbow District for the 2022 Holiday season. And others… not so much. From Christmas lights to, blow-up ornaments, Christmas balls (no, we don’t mean the go-go boys) and lit Christmas trees, some businesses really put some creativity and money in their patios.

Rocco’s WeHo goes all out for the holiday season with multiple trees along their patio and splashy screens wishing everyone a happy holiday.

The tree inside Heart WeHo was impressive, and so was the giant Santa Waving everyone inside, not to mention the beautiful creature we found hanging out on their patio looking like she’s about to put on a show.

But when it comes to Christmas trees, the one at The Abbey Food & Bar’s has the most heart with its ties to the 13th Annual Christmas Tree Lighting Ceremony that featured an appearance from Billy Porter–not to mention a check for $10,000 to benefit the Elizabeth Taylor AIDS Foundation in commemoration of World AIDS Day on December 1st. We stole the group photo from their Insta account, and took a photo of the tree from the sidewalk because The Abbey does not allow professional cameras inside.

Revolver had these giant Christmas balls hanging from its ceiling and then there were the go-go dancers.

Gym Sportsbar and Grill has some decorations inside. Instead of lights or a Christmas theme, they put up a vinyl ad boasting $7.00 well drinks, which we can’t help but wonder if it’s a dig aimed at a certain new bar that recently opened east of La Cienega and wanted to charge three times that amount.

Fiesta Cantina added a bunch of blow-up ornaments to a splash of lights that they run all year long, which is like so… Fiesta Cantina. 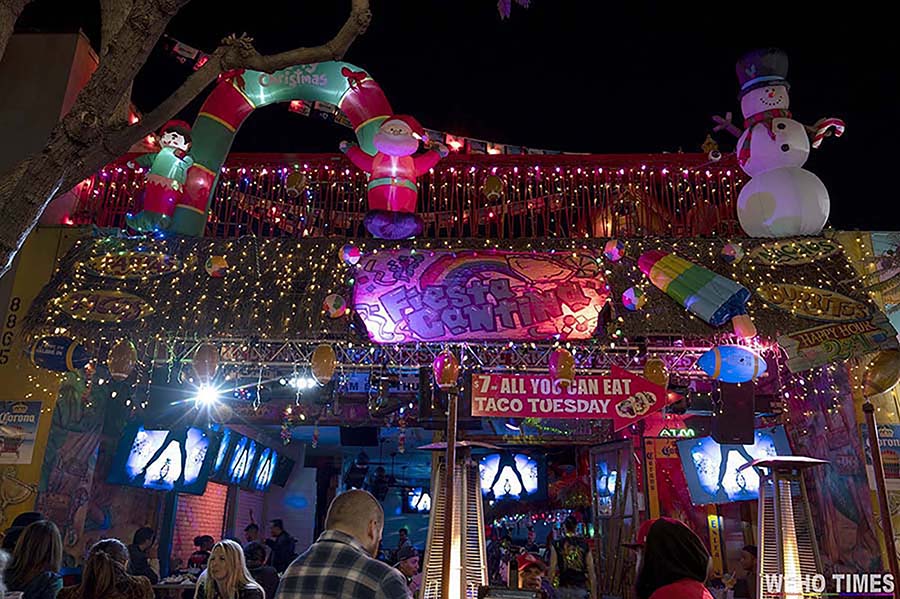 Then there is Stache WeHo…

Beaches WeHo deserves an honorable mention for keeping it classy and festive.

However… assessing all the different bars and restaurants, when it comes to production value and just an overall light display, Micky’s WeHo takes the grand prize, and we’re not just saying that because they advertise with us. Micky’s is a standout with their yearly Winter Wonderland theme that keeps getting bigger and bigger every year. This year we have a giant sign wishing everyone Happy Holidays, and they made room to put a classy tree to get their patrons in the holiday spirit. Well done Micky’s.

It all looks great on the Rainbow District and will probably stay lit into the New Year’s Celebration. But don’t take our word for it.

It’s disappointing to see that not all businesses in the LGBT Rainbow District put effort into decorating for the holiday season. The district could be a destination for the holidays, but it seems like only a select few really put in the time and money to make their patios festive and welcoming. It would have been nice to see more unity and effort from all of the businesses in the area to create a cohesive and holiday atmosphere.

Well, It looks like the LGBT Rainbow District was lit up for the holiday season, but not everyone got the memo. I guess some businesses were too busy chasing after their own rainbow to realize it was time to deck the halls. But hey, at least the go-go boys were in the holiday spirit with their festive Christmas balls. Nothing says ‘Merry Christmas’ quite like a well-decorated patio and a group of oiled up men shaking their ornaments.