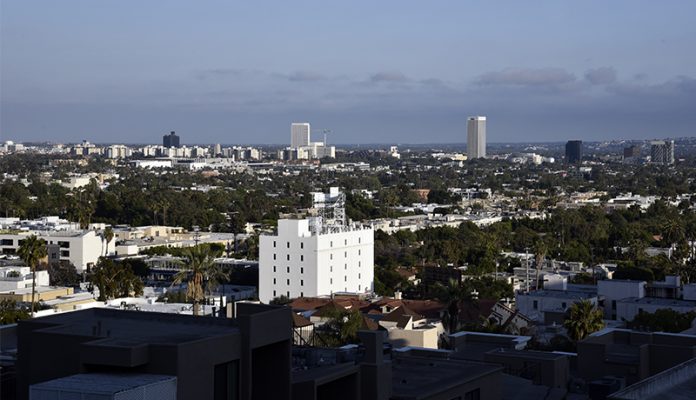 Congratulations to the The City of West Hollywood, which has been honored with the prestigious National Civic League All-America City Award. The Award, recognizes the work of communities in using inclusive civic engagement to address critical issues and create stronger connections among residents, businesses, and nonprofit and government leaders. It is bestowed yearly on 10 communities.

The All-America City Award was presented at the end of National Civic League’s three-day conference in Denver, Colorado on Sunday, June 23, 2019. The conference provided municipal thought-leaders with opportunities to connect and share insights with peers, learn from national leaders, and present the stories of their work to a jury of nationally recognized civic leaders.

20 cities were invited to take part in the All-America City Competition represented by teams comprised of residents, business leaders, nonprofit representatives, and municipal employees to show off what makes their approach to civic engagement stand out. Of these 20 cities, West Hollywood was honored among 10 cities to receive the All-America City Award. 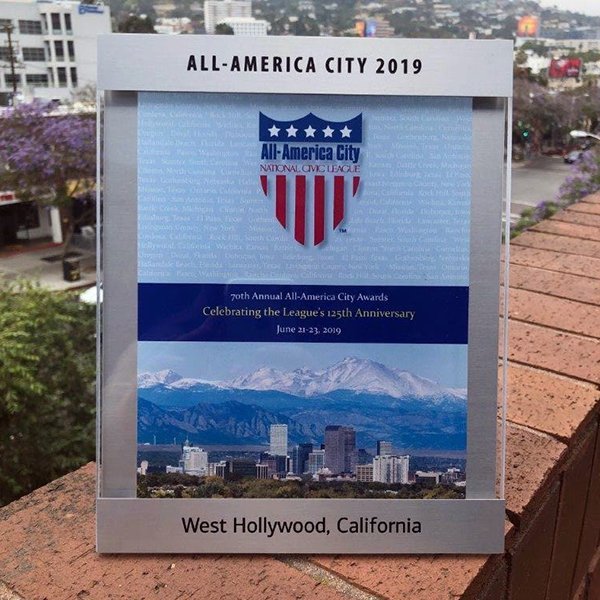 “It’s not a surprise to me that West Hollywood took home an All-America City Award. West Hollywood continues to build a strong culture of engagement among residents, staff, and the city council. Our commitment to outreach to everyone including populations historically left out of decision-making and to authentic communication programs means meaningful governing can and does happen,” said City of West Hollywood Mayor John D’Amico. “The City recognizes the importance of leveraging civic engagement, collaboration, inclusiveness, and innovation to successfully address local issues and we will continue to implement new programs and protocols to further strengthen and deepen our commitment to creating a City responsive to the needs of the community.”

In its application and presentation, the City highlighted three project histories demonstrating how it leverages civic engagement, collaboration, inclusiveness, and innovation to successfully address local issues:

In the era of the beginning of Cityhood, many new immigrants from the former Soviet Union settled in the City of West Hollywood and informal efforts for the City to reach out to this community were often unsuccessful. Determined to break through the barrier, the City created the position of a Russian Outreach Coordinator, and over time, more Russian-speaking staff were hired by the city and in law enforcement. The City also created a Russian Advisory Board to integrate the community into the City’s decision-making process. The advisory board and Russian-speaking staff members provide opportunities for community members to present their concerns, start dialogue, hear what is happening in the community, and become involved in the programming of City activities. The City has created multiple programs and events targeted to the community, including Russian Arts and Culture Month, year-round arts events, and tributes and memorials for Russian veterans and Holocaust survivors.

To complement the nearly 50-year history of Christopher Street West’s LA Pride in West Hollywood programming every June, the City of West Hollywood developed the City’s One City One Pride LGBTQ Arts Festival, which produces 40 days of mostly free events and art installations throughout the City. The festival runs from Harvey Milk Day on May 22 through June 30 each year, which marks the end of Pride month. One City One Pride is organized by the City of West Hollywood’s Arts Division with the participation of the City’s Lesbian & Gay Advisory Board, Transgender Advisory Board, Arts and Cultural Affairs Commission, and community partners, and provides the community at large with a series of arts, film, cultural, and social activities that celebrate the creativity and diversity of the West Hollywood/Los Angeles LGBTQ community.

LGBTQ youth and adults come to West Hollywood seeking safety and self-determination, but sometimes they lack adequate support networks and end up without housing. In addition, West Hollywood has a significant population of older adults living below the poverty line who are at risk of homelessness.

Since 1949, the National Civic League has recognized and celebrated the best in American civic innovation with the prestigious All-America City Award. The Award recognizes the work of municipalities in using inclusive civic engagement, which The League believes is critical to achieving success in addressing issues including racial equity, environmental sustainability, health equity, youth leadership, education, and housing.