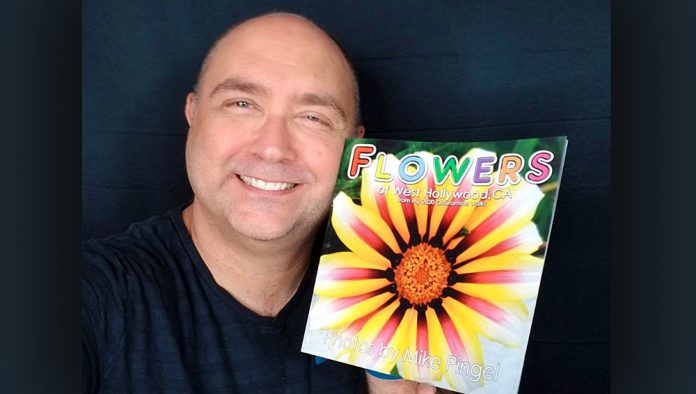 Writer and photographer Mike Pingel, wants people to stop and smell the roses and take a look at the flowers during these crazy times of COVID. His latest publishing endeavor brings us the picture book “Flowers of West Hollywood From My 2020 Quarantine Walks” available on Amazon.com.

The West Hollywood resident put together a book that is full of images of beautiful flowers he found in the city of West Hollywood while he was logging in his daily steps. The photos were taken during his walks as the city streets were emptied by the Los Angeles County Stay at Home Order back in March.

“I was going stir crazy in my apartment, so I decided to go out for my daily walks and continue logging my daily 10,000 steps,” Pingel told WEHO TIMES. “The sky was clear and the flowers were in full bloom, so I did what came natural to me and I started taking pictures. I started posting them on my Instagram account and a friend of mine was very complimentary of the photos. It got me thinking that these photos would look really nice in a book.”

The book debuted at number 56 in Garden Pictorial Books on Amazon after its release on July 27. The softcover picture book is 8.5” x 8.5”, with 102 pages full of colorful images of the flowers Pingel encountered during his walks. His walks around West Hollywood include La Cienega Boulevard to Fairfax Avenue; Hacienda Place to San Vicente Boulevard and both sides of the streets on Fountain Avenue, Crescent Heights Boulevard, Laurel Avenue, Kings Road, Sweetzer Avenue, Harper Street, Havenhurst Drive–in short, all round the West Hollywood neighborhoods.

Pingel says he’s getting positive feedback for his new book. He loves how it has inspired people to start walking and taking pictures of flowers they see on their walks. He loves getting feedback on which flowers they like the most.

He also received praise from his friend, actress Tonya Roberts (star of Charlie’s Angels and the movie Sheena), who loved the book. “She got it yesterday, and she was excited,” he said. “She said it was the most beautiful thing she has ever seen, so that felt really nice.”

However, the best praise Pingel received was from his number one fan: His mom. “My mom loved it so much. It took forever for her to get it in the mail, but when she finally got it, she said she was very proud.”

“Nature found a way to get us to slow down during this whacky pandemic world we live in,” he added. “We really need to go with the catch phrase to stop and smell the roses. When we do that, we are centered and we realize there is much beauty to see in this world.”

Pingel encourages everyone to look around and take pictures of the flowers they see and share them on their social media with the hashtag: #FlowersOfWeHo

Mike Pingel has been a resident since 1994. He works in the entertainment field as a photographer, actor, host, writer and publicist. Since the Covid-19 outbreak, Pingel has been keeping himself busy filming and producing online shows like Collector’s Heaven, a show where he chats with super fan collectors and showcases their extensive collections of memorabilia; He produces The Mike Pingel Show where he chats with authors, actors and producers; and every Saturday he hosts Live Chat with Tanya Roberts featuring actress Tanya Roberts from Charlie’s Angels and James Bond fame, where fans have a chance to engage with the star.

In the 1990s, he became known as an Angelologist in the media and created CharliesAngels.com, which premiered on the internet in October 1996. The site was quickly picked as the site of the day by Yahoo and WebTV. Since 1996, the site has kept Charlie’s Angels fans updated about the show and on all the six actress who played the Angels.

Follow Mike Pingel on all his Social Media outlets: