This here is a throwback/flashback to the Pacific Saw & Supply Co. building in the city of West Hollywood, circa 1974. The photo above is facing the north west corner of Santa Monica Boulevard and San Vicente Boulevard, where the now defunct Rage Nightclub once stood. It’s hard to believe the building that would once become a popular gay dance club, was once a hardware store specializing in power saws in the early 60s to late 70s.

The corner of Santa Monica and San Vicente was also home to the West Holly Rexall Drug Store, where the US Bank now stands. Above it, was a 24-hour AIR Bail Bonds. Next door to West Holly Rexall, on the San Vicente side, was an old liquor store, and across the street, not in view of the photo, was a car dealership where Rounderbum now stands. Part of that dealership was the old Post Office building north on San Vicente.

To the left of Propinquity, also not shown in the photo, was a Laundromat where the Halal Guys once stood and right on the corner was the Hilldale Coffee shop.

An interesting thing to note is Emerson’s Locksmith Co., located to the right of the Pacific Saw & Supply Co. The photo was taken before the locksmith moved across the street, next door to Koontz Hardware store. The locksmith was forced to move out of Santa Monica Boulevard back in July of 2018. They are now located at 406 N. La Cienega Boulevard, which is still part of West Hollywood. 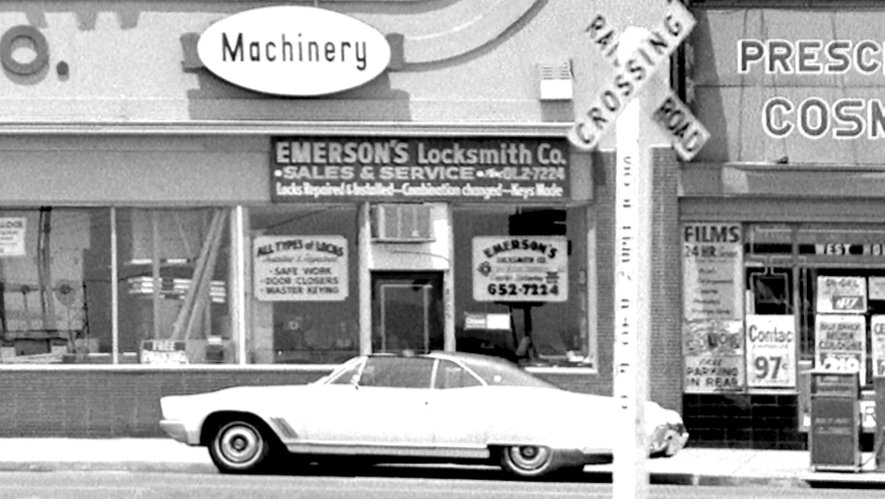 I interviewed Morrie Alpert after this publication broke the news that the neighborhood locksmith was out of Boystown. Mr Alpert reminisced on what West Hollywood was like 50 years ago during a time when that area attracted a rock-n-roll crowd, being gay was not as open or accepted as it is today, life was less hectic, and bars didn’t populate the entire strip.

“I bought the shop in 1968 from Mr. Emerson,” he said. “It was 12 years old at the time we bought it. We were across the street, part of where Rage is today. I’ve had this shop 50 years and we’ve been at this location 40 years. Where Bank of LA is, that used to be a drug store. Right next to the drug store was a big place called Pacific Saw and Supply. They sold tools and big saws. Mr. Emerson knew the owners. He had actual chicken wire in 16×29. And I mean chicken wire. They had a door and everything else was chicken wire. And when we bought it, that’s what it was. When I first started, I took 50 dollars a week as a draw. When you’re married and have a family that was a struggle. I thank God my wife was working.”

Mr Alpert also remembers the railroad tracks that ran along Santa Monica Boulevard. “The railroad company had a contract that every 48 hours or so, they had an engine and a caboose go up and down the tracks to maintain it,” he said. “They did it at night.”

Pacific Saw & Supply Co. was in direct competition with Koontz Hardware store located right across the street. Mr Morrie remembers Koontz burning down in 1980. They moved to the old Factory Building (Studio One Dance Club), before moving back to its original location where it still stands today.

The actual Pacific Saw & Supply building was built in 1923, according to the LA County Assessor’s map. The hardware store was still standing in 1980, if the date on the photo taken above by Bob Thompson is accurate.

It’s not clear when the Art Deco Streamline Moderne elements were added to the building, but the moldings may have been removed in the early to mid-80s, most likely when Rage took over the building and the hardware store became a dance club.

The iconic Rage Nightclub permanently closed this past September after operating in the heart of West Hollywood’s Boystown for 37 years. According to sources, the restaurant/bar and multi-level nightclub did not renew their lease, which was up in November. Former employees also blamed the COVID-19 pandemic and high rent as factors in its closure.

Rumors have been circulating that Hamburger Mary’s WeHo will move to that space, but it’s all hearsay as of the publication of this piece.

If there is any truth to the rumors, Mary’s should bring back the Streamline Moderne elements that were once part of the vintage Pacific Saw & Supply Co. building.

Great photos. Almost unrecognizable back then! https://www.youtube.com/watch?v=TAaZxzxIv2w RAGE NIGHTCLUB AND CAFE D ETOILE MAY BE GONE BUT THEY LIVE FOREVER IN THIS DIANA ROSS VIDEO – I WILL SURVIVE HD REMASTER 2020

My friend and I were there that night. There were SO many reshoots that we finally got bored and left. Great fun though.