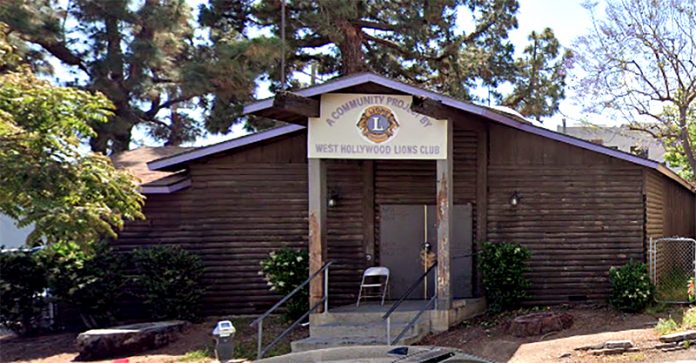 Sad news on an early Sunday Morning. The West Hollywood Lions Club Log Cabin, a home to 12-step meetings for thousands upon thousands of recovering alcoholics and addicts, is scheduled to be demolished. The City of Beverly Hills gave notice to the Lions Club to demolish the Log Cabin, located at 621 N Robertson Blvd, and vacate the land by March 31, 2020.

Phone is ringing off the hook. The City of Beverly Hills has given notice to the Lion’s Club to demolish the Log Cabin on Robertson Blvd and vacate the land by March 31, 2020.

I am discussing with Weho City Manager and City Attorney. The Log Cabin may have potential historic significance. As such, it cannot be demolished without public input and due process.

I spoke to the President of the Lion’s Club yesterday and notified him that the building has the potential of being nominated as a historic property. Therefore, I am asking my city attorney to issue a cease and desist order against both the Lion’s Club and the City of Beverly Hills from attempting to demolish a potential historic structure without due process of law.

The Log Cabin is very important to me. Some see it as a crappy run down rustic building that needs to be torn down.

I see it as a place where MIRACLES have happened for decades. Recovery on Robertson is a critical issue for the West Hollywood. community. I will keep you updated here on Facebook and Twitter. But in the meantime, you can express your comments with the City of Beverly Hills by emailing their city council at

I will work with my colleagues on the West Hollywood City Council to do what I can to preserve this treasured place.”

http://www.smartrecovery.org/smart-recovery-toolbox/ Free mutual support meetings, no higher power required , you are not powerless !

No place for your asswipe marketing ploy. Go away, opportunist.

Stop living in the past and just find a way forward. There are still churches in WEHO and Los Angeles to go to.Y’all just need to move on and not use it as an excuse to not continue moving forward. Maybe a Patron can be found amongst all the celebrities that have found sobriety at the log cabin to buy a new place.

Stick it in your ear!!

Maybe the club needs to start a new 12 step program for negative people like you! Obviously, you have no idea what those run down walls carry! I not in the program, but I am fortunate enough to have great people in my life that if not for that place, might not be here today! This issue to people like you is simple greed! I grew up in Beverly Hills. I know that keeping this little building, would not bankrupt the city! Beverly Hills, please find your heart again! It certainly is not the same city I was proud to… Read more »

I agree Jacqueline and thank you for recognizing its importance.

You’re an idiot and have no idea what you’re talking about. Never post on a subject you have zero knowledge about. Stop picking on Celebrities who work hard at their sobriety and are regular people who have this as their job and more than that pass on a strong message that sobriety works. Maybe you should go to Anger and stupidity anonymous. You could start it at your house!!!

Exactly right. It is not this little old building that has been saving people, but it’s the various programs that were held there. Are all you haters claiming that the programs offered in the Log Cabin will NOT work elsewhere? West Hollywood nor the Lions have been paying rent there for years. You should be thankful City of BH didn’t act to demolish this place years ago. Hold the meetings somewhere else. I’m sure there are plenty of generous celebrities (or the City of Weho) who would be more than eager to pay the rent somewhere else. The City of… Read more »