The Los Angeles Sheriff’s department and law enforcement partners in Los Angeles County were on tactical alert in the city of West Hollywood on Tuesday, April 20, in the event of possible civil unrest following the verdict of Derek Chauvin. The Minneapolis police officer accused of killing George Floyd last year received three guilty verdicts on all three counts.

What should’ve been met with a sigh of relief following the guilty verdict, was instead met with extra precautions by law enforcement officers who barricade around the West Hollywood Sheriff’s station. According to reports, there were several celebratory demonstrations and protests against police brutality throughout Los Angeles. A crowd gathered as close as the Fairfax District.

Captain Ramirez of the West Hollywood Sheriff’s Station stated at a regular city council meeting on Monday, April 19th that the city of West Hollywood was prepared and could go on tactical alert.

“The West Hollywood station is prepared,” Captain Ramirez told the city council Monday night. “The department may go on tactical schedule which will enhance the number of personnel during the day and evening hours. The department will be mobilizing sheriff’s response team and mobile field forces. Additionally, West Hollywood station will have additional assets staged at that station.” 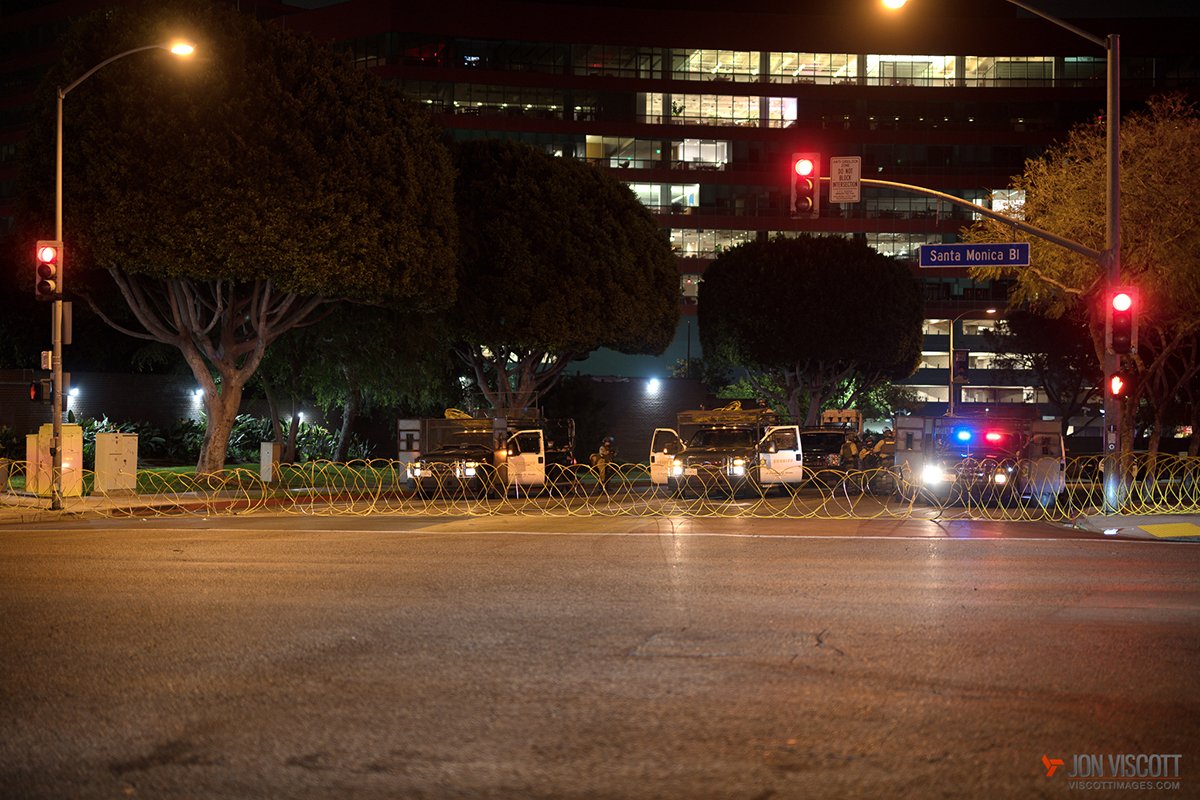 Photos by © Jon Viscott – www.viscottimages.com Photographs May Not Be Reproduced Without Permission and License.

The all too familiar yellow wire “slinky” was out to block all access to San Vicente Boulevard north of Melrose Avenue and south of Santa Monica Boulevard. Law enforcement anticipated demonstrators marching from Fairfax towards the West Hollywood Sheriff’s Station like in previous demonstrations for Black Lives Matter.

Law enforcement stood watch on the corner of San Vicente Boulevard and Monica Boulevard despite a relatively quiet evening at the Rainbow District. People dined casually at local restaurants like Rocco’s WeHo, only steps away from armed officers.

Helicopters could be heard in the not so far distance towards the direction of the Fairfax District where protestors were reported to have staged a sit-in on Fairfax Avenue and Beverly Boulevard. As the evening wore on, there were no signs of protestors marching towards WeHo. According to reports they headed northeast towards Hollywood and Vine instead.

“Let the community rest assure that we’ll always support and defend everyone’s constitutional right to peacefully assemble and protest as we showed last summer,” Ramirez stated. “What we will not support is anyone who wishes to come to West Hollywood to vandalize, to assault members of our community or law enforcement or destroy businesses and residents or any other property. People coming here to engage in that type of activity will be met with a large and overwhelming law enforcement response. We will always protect life and property and our beautiful community of West Hollywood.”

Most of the law enforcement personnel cleared out of San Vicente Boulevard by roughly 11 p.m.