The Los Angeles Sheriff’s department and law enforcement partners in L.A. County were once again on tactical alert in West Hollywood on Sunday, April 25, 2021. Lieutenant William Moulder confirms officers were on standby due to the Black Lives Matter protest at the Fairfax District yesterday.

San Vicente Boulevard was closed northbound at Melrose Avenue. The detour caused some congestion due to the Out on Robertson Street closure. The yellow wire slinky did not make an appearance at the Sheriff’s Station. However, law enforcement officers remained on the scene. They gathered at the parking lot of the Pacific Design Center and kept their distance from members of the public who were eating and drinking at local restaurants.

Other safety measures included the dumpsters on standby at Santa Monica Boulevard and Sunset Boulevard. The dumpsters have been used to control traffic and divert protestors from the certain parts of West Hollywood.

The BLM protest blocked traffic on Sunday at the intersection of Third Street and Fairfax Avenue. An estimated 100 plus people gathered at Pan Pacific Park and then marched to Fairfax and Third. Protestors made speeches from a flat bed truck that was blocking traffic. They spoke against police abuse and violence. The rally began around 3 p.m. and lasted more than an hour, according to media reports.

The protest was billed after George Floyd. The promo flier also listed the names of Ma’Khia Bryant, Adam Toledo, Duante Wright, Anthony Thompson Jr., and Andrew Brown Jr.. These are the names of those killed by Police in Los Angeles.

“As demonstrators gathered in the intersection of 3rd and Fairfax today to exercise their First Amendment rights, LAPD traffic officers diverted traffic in all directions to ensure their free speech and safety,” reported @LAPDHQ on Twitter. 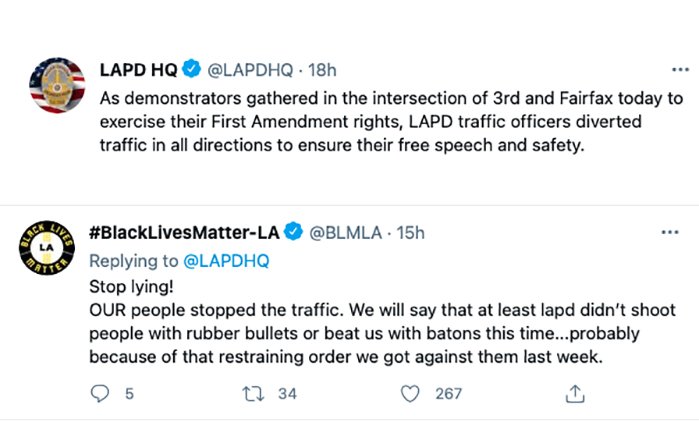 “Stop lying!” Replied the verified Twitter handle for Black Lives Matter Los Angeles @#blacklivesmatter. “OUR people stopped the traffic. We will say that at least lapd didn’t shoot people with rubber bullets or beat us with batons this time…probably because of that restraining order we got against them last week.”

Ma’Khia Bryant was shot as she was about to stab to death another girl. Her actions dictated what happened to her. Personal responsibility. One sure way not to be shot by the police….don’t try and stab someone. So very sad…that over an argument about housekeeping can get so out of hand that someone would try and stab the other person to death. Absolutely insane. Thank God the other girl was saved by the police that were at the scene.