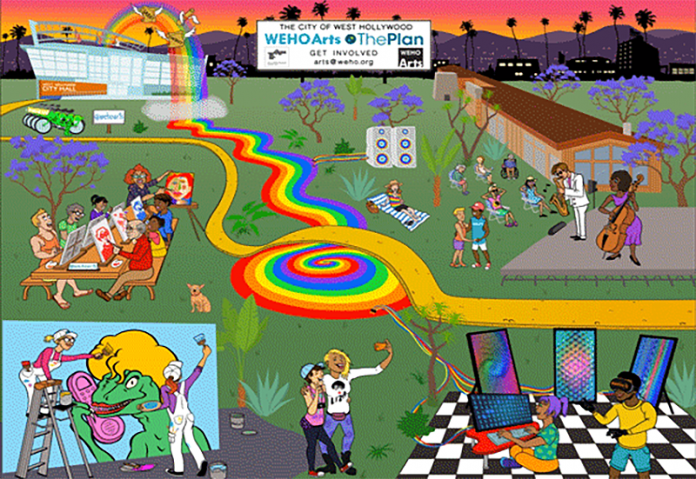 Take the survey. The City of West Hollywood is seeking feedback about the feasibility of a large scale and city-sponsored Community Arts Festival.

The City continues to implement its cultural plan, WeHo Arts: The Plan. It is collecting feedback in response to community members who have expressed interest in piloting a large-scale, city-hosted community arts festival, wherein groups and individuals would be able to create, present, and engage in work around a particular theme.

The City has launched an online survey to collect feedback about the topic. The survey is available at www.bit.ly/wehoartsplan and is open to residents and community members. The survey features 22 questions and should take less than 10 minutes to complete; the link will be active through the end of October 2019.

WeHo Arts: The Plan, is an expression of the community’s vision for the future of the City of West Hollywood’s arts programming. The cultural plan is the result of an outreach process that included contributions from more than 1,700 individuals and groups, and included numerous community engagement events, from pop-ups to small group discussions to social practice artist-led workshops throughout the City of West Hollywood.

The Plan’s overarching goals, defined by the City’s Arts and Cultural Affairs Commission, are to:

Celebrate the City of West Hollywood’s distinctive artistic and cultural identities;
Identify and commemorate West Hollywood’s support and advancement of the arts; and
Articulate a shared vision for the future: securing the position for the arts and culture at the heart of our creative city.

The Plan is structured around 20 recommendations grouped under five key principles: Space, Engagement, Support, Visibility, and Experimentation. The recommendation to pilot a large-scale community arts festival relates to the principle of engagement, which acknowledges that art has the capacity to bring people together and create community; the arts should be viewed as a resource and a vehicle for people to understand the City’s values.