WeHo Resident Was Beaten and Robbed on San Vicente Blvd 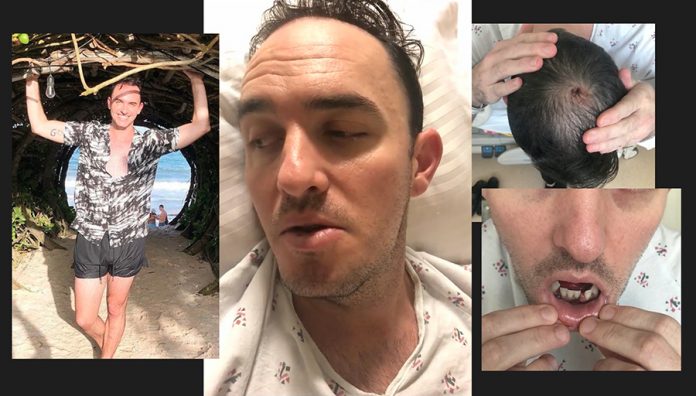 Five-year West Hollywood resident Matthew McGrath says he was verbally attacked, beaten, and robbed last month on San Vicente Boulevard. He was knocked unconscious and landed in the hospital for two weeks with multiple jaw reconstruction surgeries and other complications related to his attack.

“On Sunday, November 14th, Matthew was the victim of a hate crime where he was attacked and left unconscious,” reads a post on a gofundme campaign created by his family. “After a night out with friends, he was walking up his street where he has always felt safe in the West Hollywood community. He was surprised by an attack where he was hit and immediately knocked out. He suffered head injuries and a compound fractured jaw in two places. He has minimal recollection and did not see who randomly attacked him, but the police, his family, and friends are involved to find the individual or individuals responsible for this brutal attack.”

The latest update states that he was back in the hospital last night due to an infection related to his injuries.

“I am sad to report that Matthew is back in the hospital tonight due to his infection,” reads the latest update. “It has become worse since his doctor’s appointment on Wednesday and there is now a large abscess that has formed, misshaping his face and causing the worst pain he has felt so far.”

McGrath told KTLA 5 news that he was walking home along San Vicente Boulevard after a night out with friends at The Abbey Food & Bar when he “heard some slurs, some profanity,” before he was knocked unconscious.

When he awoke, his wallet and cell phone were missing. The next day, he went to the hospital for scans.

He is asking the community and local businesses for help that may lead to the arrest of his attacker.

The night after McGrath was assaulted, a person was beaten and stabbed on Santa Monica Boulevard. David Cook, 44, was arrested for that stabbing last month.

Three nights later, another incident took place in WeHo where in the late hours of Thursday November 18, 2021, West Hollywood Station Deputies apprehended a suspect who was armed with a box cutter and a bat, terrorized several victims within a two block radius.  McGrath said this attack was unprovoked and could have been connected to his sexual orientation, but given the recent rise in follow-home robberies and other crimes, he encouraged everyone to be mindful of their surroundings.

McGrath tells KTLA5 that he believes he was targeted for his sexual orientation, however he warns that “Regardless of how safe you think you are, wherever you are, it can happen,” he said.

The gufundme has raised $29,098 of a $75,000 goal as of the publishing of this piece. To donate, or share the fundraising efforts, visit: https://www.gofundme.com/f/support-matthew-mcgraths-recovery

His story is suspect and seems like a drug deal gone bad. However, there is an increase of crime – both material and body- due to the liberal policies of the democratic party. No bail policy leads to the increased crime. Stop crying hate crimes – and vote for moderate candidates that are pro safety.

That’s no surprise as the sheriffs and city hall doesn’t want the real crime statistics out as they might frighten the community God forbid folks discover they aren’t doing their job!!! There’s been a mental nutcase on sunset Blvd adjacent to Hart Park who threatens to kill numerous people and their dogs daily. The city does nothing but give him a hotel room (jail) overnight with room service then he’s out doing more of the same.