West Hollywood resident Kim Byers had Miss Kitty, a semi-feral cat stolen from her front porch this past Sunday, May 22, 2022, at 4:35 p.m., on North Vista Street, near Plummer Park.

“MISS KITTY STOLEN FROM FRONT PORCH,” reads a post on her social media platforms. “I have a semi-feral cat that I have cared for (with my neighbor) for several years that lives on my front porch with her heated bed and 3 meals a day (and the occasional overnight on the sofa when it’s really cold). Having worked to gain her trust over the years, she has become relaxed with being approached and handled a bit.”

Byers, who has been a West Hollywood resident for the past six years, says Miss Kitty was not at her usual spot this past Sunday. After a day without a sign of Miss Kitty, she played back her Ring camera footage and found a 30-second snippet showing a stranger in her front porch putting the sleeping cat into a pet carrier.

@ring footage captured Miss Kitty-a semi-feral cat being stolen from the porch where she was being cared for in @WeHoCity by Plummer Park. Call Kim at 424-625-8086 with any info on the sickly cat. Or just return her. #wehotime #wehonews #wehocity @WHDLASD pic.twitter.com/lDdx6zoNEL

“The person came with a pet carrier, so it looks like it was premeditated” Byers told WEHO TIMES. “We have no idea who it is. It kind of strikes me as someone who was on foot, but it’s hard to tell. From what I could tell Miss Kitty was asleep in her heated bed and this person grabbed her before she had a chance to wake up.”

Byers says Miss Kitty is really fragile and quite old. The neighborhood on Vista Street knows the cat well. She was a catch, fix, and release about 14 years ago. “I was the first person to gain her trust,” she said. “They got her in the bag before she could not get her wits about her. We were working on getting her to be ok to take to a vet. She isn’t likely to survive otherwise. She needs medical attention.”

Though Byers has not made an official police report, the West Hollywood Sheriff’s Station has been notified via email by one of the neighbors. A lieutenant said he has the information and that he would get the word out. Missing cat posters are currently in the works.

“If you are the person who took her, please just place her back in her bed which is waiting for her,” she posted on her Facebook page. “NO QUESTIONS.”

Miss Kitty was taken during the City of West Hollywood inaugural Pet Week, which includes a Feline Day. Anyone with any information on the cat stolen on N Vista Street in West Hollywood can text or leave a message with info at: (424) 625-8086. 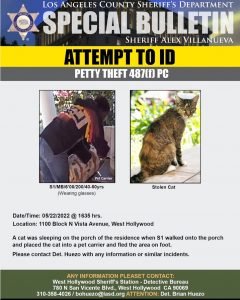 Feral cats deserve to be eaten by coyotes. They spread disease like toxoplasmosis that killed AIDS patients. They eat songbirds and kill kill kill native animals. It’s what cats do. They constantly breed. Get a cat, spay it, keep it. And don’t give me any boo hoos self absorbed cat fanciers. You will get nowhere with me. Ever try to date a gay guy with pets? Forget it you won’t get past their four legged “boyfriend.” A heated bed for stray cats? Maybe if this feral cat enabler cared more about humans they would be a happier person.

I would not take any tips on happiness from a wretch who prides himself on being so angry. Your post is case in point.

What the f*ck is wrong with you? You sound like YOU took the cat. You need help.

You have serious issues. I pray no animal ever crosses your path. Fking future serial killer.

BTW – no guy has dumped you because he loved his dog more. Guys dump you because you’re a sick, miserable scumbag. Stop blaming innocent animals for your pathetic love life.

You are a very disturbed..human?

Don’t make comments on articles you don’t read. This cat was spayed many years ago, per the article, is also a senior cat needing medical care, gets fed three times a day—the latter two facts contributing to a better guess that this cat is not hunting songbirds. You are a gadfly, “Angry Gay Pope,” and nothing more.

It is unbelievable…the blatant act of not only stealing someone’s beloved pet but also in broad daylight directly in front of a Ring security camera! Praying for Miss Kitty’s safe return.

This is absolutely horrible! I have met Miss Kitty, and she is very much loved and cared for. It’s especially disturbing that this person came with a pet carrier, prepared to steal a defenseless animal. I do hope someone recognizes this man and Miss Kitty is found. Such sad news!

Have you posted it on Nextdoor Ms. Byers?

Yes, I have. I have also reported in Neighbors/Ring and now have a file a report with the WeHo Sheriff’s Dept.

OMG this is horrible!!!

Thank you for so much for caring! The reasons someone would steal a cat are horrendous and I am so worried about Miss Kitty. I will be reporting it to the police, so will have a case number shortly. We also just can’t have this sort of thing happening! If she’s not returned, this person needs to be caught and prevented from doing it to others! If someone will hurt an animal, they will also do many more horrific acts. 🙁 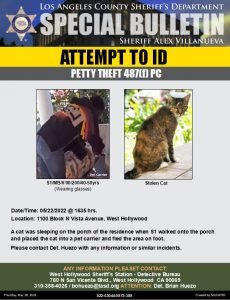 This is so upsetting, I hope this will get the word out so Miss kitty will be back home soon .

Thanks to WeHo Times for posting this story about Miss Kitty. She is so loved by Mim and the rest of our. Isra Street neighbors.

Thank you so much for this article, Paulo, I know Ms. Kitty well snd I help feed her and I spend time with her often. I am so concerned. This will be a big boost to getting her story out. Many thanks. Virginia Gillick