A resident speaking on behalf of the Home Owners Association at 1420 N Laurel Ave (Laurel Gardens) in West Hollywood reports that two male suspects broke into the building and stole mail packages and other items from vehicles inside the building this past Saturday. Video footage captures the two men who appear to be Hispanic, walking away with bags and packages. They wore a masks and gloves to hide their identity.

“From approximately 3:50am-4:10am on Saturday morning, July 9th, two unidentified men broke and entered into our building in a home invasion,” reads an email sent to WEHO TIMES. “A single man first attempted to breach the main front entrance, which he was unable to do. He then gained entrance by breaking through the secondary entrance doors to the left side, adjacent to the courtyard. Soon after, a second accomplice joined him. They then made their way through cars in the garage, stealing items from the car of the tenant living in unit #406. We believe they also stole packages. They then made their way on foot from the garage through the ground floor hallway right past residents’ front doors, from which they exited through the breached door. The two men appear to be Latino and were both wearing disposable face masks.” 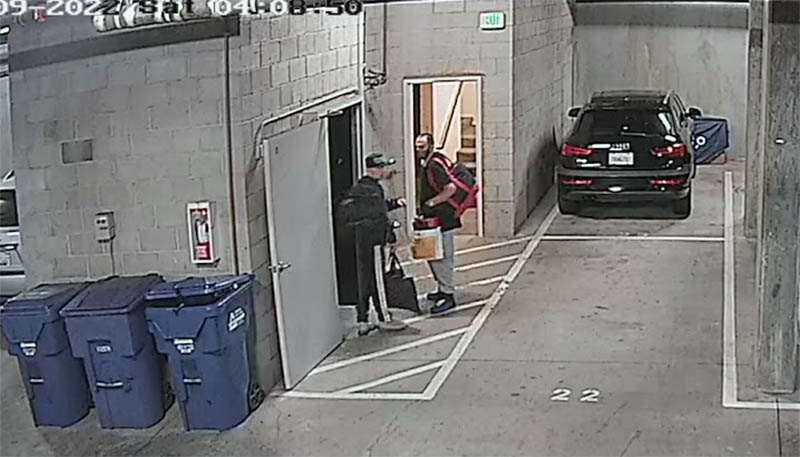 The resident says West Hollywood sheriffs were notified and are sending deputies to the Laurel Gardens address to investigate. “We will be filing a police report imminently,” he said.

Take a look at how much Beverly Hills and Santa Monica spend on public safety and then compare to West Hollywood. That will tell you all you need to know. No cameras, no license plate readers, no extra deputies to handle special problems that come up. They only have time to go from call to call. The public safety commission has no background in LE. It should be comprised of retired public safety officials. Block by block has no training and most importantly no ability to detain and arrest criminals. They cannot contact them and check them for warrants. They… Read more »

I agree with most of your points. However, Santa Monica and Beverly Hills have their own police departments. So of course they’re going to pay more. They have to pay for jails, courts, etc.