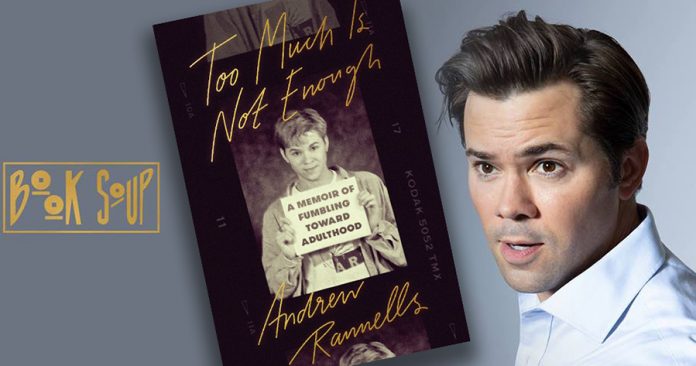 The City’s ‘WeHo Reads’ Series is presents Broadway’s Book of Mormon Star and HBO’s Girls, Andrew Rannells, who will be discussing his new book “Too Much is Not Enough” on Wednesday, March 20, 2019, at 7 p.m. at the City of West Hollywood’s Council Chambers/Public Meeting Room at the West Hollywood Library, located at 625 N. San Vicente Boulevard.

For its upcoming WeHo Reads author series, Andrew Rannells will discuss and sign his new heartfelt and hilarious coming-of-age memoir about a Midwestern boy surviving bad auditions, bad relationships, and some really bad highlights as he chases his dreams in New York City. The event is presented by the City of West Hollywood’s Arts Division and Book Soup.

When Andrew Rannells left Nebraska for New York City in 1997, he, like many young hopefuls, saw the city as a chance to break free; to start over; to transform the fiercely ambitious but sexually confused teenager he saw in the mirror into the Broadway leading man of his dreams. In Too Much Is Not Enough, Rannells takes us on the journey of a 20-something hungry to experience everything New York has to offer: new friends, wild nights, great art, and standing ovations.

As Rannells fumbles his way towards the Great White Way, he also shares the drama of failed auditions and behind-the-curtain romances, the heartbreak of losing his father at the height of his struggle, and the exhilaration of making his Broadway debut in Hairspray at the age of 26. Honest and hilarious, Too Much Is Not Enough is an unforgettable look at love, loss, and the powerful forces that determine who we become.

Tickets are $26 plus tax (includes one copy of the book) and are available at Book Soup or online at https://www.eventbrite.com/e/an-evening-with-andrew-rannells-tickets-55001767768. 20 free tickets (which do not include a copy of the book) will be provided to West Hollywood residents providing proof of residency via a government ID, lease, or utility bill. Confirm your address is in the City of West Hollywood by visiting www.weho.org/streets. Limit of two resident tickets per person. Tickets may not be resold, and free resident tickets do not include a copy of the book. Tickets can be reserved in advance on a first-come first-served basis by emailing Mike Che at mche@weho.org. The physical tickets must be picked up by 6:15 p.m. on the night of the event, or they will be released to those on standby. This event is expected to sell out. Free parking in the adjacent five-story parking structure with validation at the event.

Upcoming 2019 WeHo Reads events will take place at 7 p.m. and include: