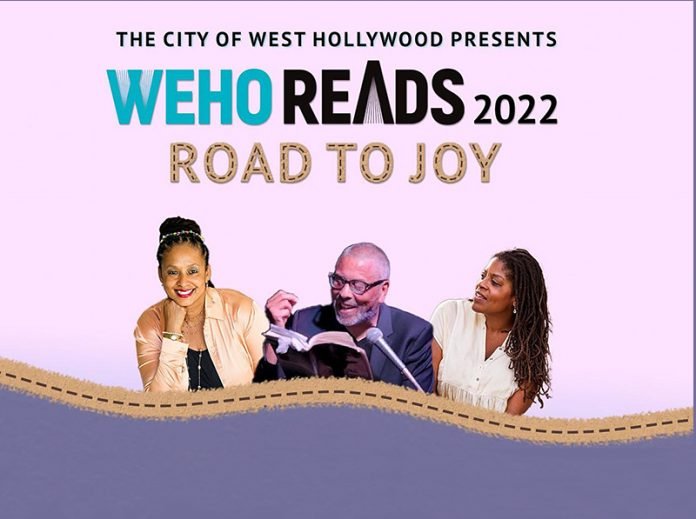 WeHo Reads 2022 series kicks off the new year with Songs and Signs of Hope and Healing, a collection of songs, poems, stories, and images from Shonda Buchanan, Peter J. Harris, and Imani Tolliver. The poets and writers will focus on healing and hope.

Shonda Buchanan will open the event with a song and discuss her memoir Black Indian, which explores her family’s legacy of being African Americans with American Indian roots and how they dealt with not just society’s ostracization but the consequences of this dual inheritance. Peter J. Harris will discuss the Black Man of Happiness Project’s See You Campaign, which excavates historical photos of Black men “emanating a sense of joy.” Imani Tolliver will recount her intersectional and sacred journey as a Black queer woman and share excerpts from her memoir-in-verse Runaway.

All WeHo Reads 2022 events are taking place online at 6 p.m. Pacific Time and admission is free.

All videos will be visible on our WeHo Arts YouTube channel: www.youtube.com/c/wehoarts or below.

WeHo Reads is a literary series presented by the City of West Hollywood. More information and events at www.weho.org/wehoreads. BookSwell, a literary events and media company dedicated to lifting up writers from historically excluded communities, is producing the WeHo Reads 2022 season with additional support from media partnerships with the Los Angeles Review of Books, Beyond Baroque, Bookshop.org, and Book Soup

Other WeHo Literary Arts include:

The City and Library support several community book clubs such as Women And Books (first Tuesday each month) and the Lambda Literary (LGBTQ) Book Club (last Tuesday each month-moderated by our first City Poet Steven Reigns!) at the West Hollywood Library.

West Hollywood is very proud to be the home of Book Soup (8818 Sunset Blvd.), named the best bookstore in ‘L.A.’ by LA Weekly. Book Soup hosts readings and book signings on an almost daily basis. Check out their schedule at www.booksoup.com. The City also partners with Book Soup to present WeHo Reads throughout the year at the West Hollywood Library.

The City is running a pilot program for city residents to apply to receive funding to build, install, and maintain a Little Free Library on their private property. For more information, click here.

One City One Pride

The City’s One City One Pride LGBTQ Arts Festival is held each year in June and features a variety of literary events each year during Pride month (May 22 – June 30).

The City with its partners at the Library and Friends of the Library supports a wide variety of cultural programming at the Library (625 N. San Vicente Blvd.). Also the City through WeHo Arts mounts rotating exhibits in the Library building. Check the West Hollywood Art Division page for more info here

The Arts Division no longer manages room bookings for the Community Meeting Room and West Hollywood Room at the West Hollywood Library, but for information on these rooms you can visit: www.weho.org/libraryrooms

Please support your local West Hollywood bookseller by buying books from our authors from Book Soup.