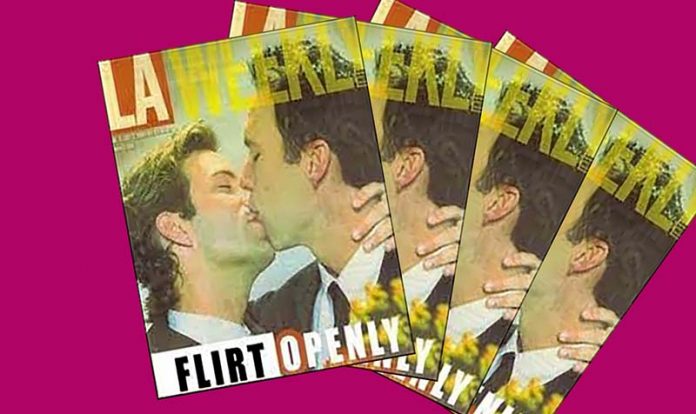 Any stranger who I come in contact with today might safely assume that I’m gay — the rainbow watch band displayed prominently on my wrist sees to that — yet every year as June comes around, I’m reminded of my own difficult relationship with Pride and the role this city has played in my queer journey.

When I moved here in 2006, right after college, I was still very much in the closet. Up to that point, I had never kissed a boy, much less dated one, but starting a new phase of my life in a new city, I took a chance and messaged a cute guy I saw online. Before I knew it, I was happily in love with my first boyfriend — not that I dared share that information with another living soul! In fact, I was so scared about outing myself, that one seemingly mundane incident is still burned into my memory.

I was stuck in traffic on Hollywood Boulevard with my boyfriend in the passenger seat when he casually reached over and rested his hand on my leg. It was a sweet little sign of affection, but all I could think about in that moment was how my boss lived nearby and those non-tinted windows of my base-model Hyundai Elantra offered absolutely no cover from anyone on the sidewalk! Fortunately, the heteronormative survival skills I’d spent a lifetime perfecting kicked in. Without wanting to tip-off my boyfriend to the total panic attack I was having in my head, I casually asked him to adjust the air conditioning vent. As soon as his hand left my leg, I deftly slid my own hand onto the gear shift to block his from returning. It did the trick, and I let out a silent sigh of relief — appearance of straightness, accomplished!

Now, there are all sorts of things wrong with my total freak out at that situation. First of all, no local would be caught dead amongst the throngs of tourists and knockoff Disney characters in the middle of a Saturday on Hollywood Boulevard. And even if for some reason my boss had been there and had looked into the window of my car at that exact moment, I knew other coworkers who were out, and she was a complete ally. The truth is, I wasn’t really trying to hide my queerness from her… I was hiding it from myself.

The reason I share that story this month is because my relationship with gay Pride festivals has been about as complicated as my relationship with my own gay pride. I grew up in San Diego where my family attended University Christian Church in the heart of Hillcrest. It was (and still is) a socially progressive, open and affirming congregation, so every time San Diego Pride came around, the church organized a group to march in the parade and show our support. And while I was regularly invited to take part “as an ally,” I had my reasons for turning them down every year.

One of the purposes of LGBTQIA+ Pride parades is the hope that increased visibility will lead to increased acceptance, but the way I saw it, Pride parades created just as much risk of the exact opposite happening. Ignorant homophobes who see all gays as leather daddy sex fiends or flamboyant drag queens use those preconceived stereotypes to emphasize our “otherness” so they can be justified in their disapproval and hate. Yet after every Pride parade, is it the average, modestly dressed people who make up the majority of the crowd that get featured in the media? Of course not! It’s the most outrageous, in-your-face, eye-popping displays of queerness that make the front page. The headlines might as well read: “Dear homophobes, you were right.”

So I avoided Pride festivals completely… until I came to LA. It was Pride week here, and I was once again driving with my boyfriend, this time down the Sunset Strip, when we passed by a digital billboard that had the words “Flirt Openly” over a photo of two men kissing. It was such a beautifully succinct statement of such a simple freedom straight people take for granted, that even though I never saw the billboard again, the image has stuck with me to this day. I said nothing at the time, and I don’t think my boyfriend even noticed the sign, but as we continued driving down Sunset, I mustered the courage to place my hand gently on his leg.

I’ve since found out that the billboard was an advertisement for LA Weekly, but its impact was much greater than getting me to pick up a newspaper: it made me more comfortable with my sexuality and more proud to be who I was. Which begged the question, if that much power could come from one little ad, what could an entire parade do?

It was that experience that made me realize I’d been thinking about Pride parades the wrong way my whole life. While a part of them is indeed about raising acceptance from people outside the LGBTQ+ community, they play a far more important role in raising acceptance within our community — from leather daddy sex fiends, to flamboyant drag queens, to everyone else in our beautiful, diverse, queer alphabet.

The year of the “Flirt Openly” billboard was the year I attended my first Pride parade right here in West Hollywood. I haven’t missed one since, and I encourage everyone I can to do the same. You never know how even the smallest thing you might see could have an impact on your own life, or how the smallest thing you might say or do could have an impact on someone else’s.

Jeremy Svenson is a screenwriter who’s called West Hollywood his home for over a decade. You can follow him on Twitter @jeremysvenson.