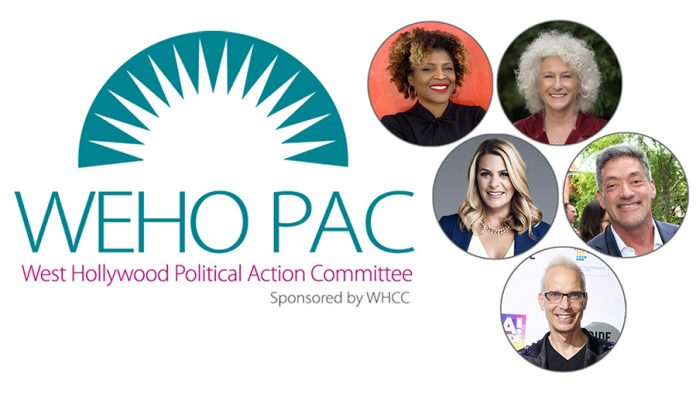 The Weho PAC announced five endorsements for West Hollywood City Council on Friday, September 16, 2022. The decision was made based on a candidate’s experience and understanding of government process, their representation for the business community, positions taken on various business issues, as well as the challenges that face the business community, and their ability to outline strategic solutions to these issues. All candidates share the community’s concerns for public safety and economic stability.

The WeHo PAC Trustees reached a decision after much deliberation, based on private one-on–one interviews with all twelve candidates, as well as a public candidate forum hosted by the West Hollywood Chamber of Commerce and nine neighborhood associations.

WeHo PAC endorsed the following five candidates–all who share a vision for West Hollywood, which aligns with the business community:

The five PAC Trustees are comprised of Chamber Members appointed by the Chair of the Board for the West Hollywood Chamber of Commerce (WHCC).

“I would like to thank the members of the PAC committee as well as the candidates, each of whom came prepared and responded to our questions, and enabling us to engage in a healthy and productive dialogue”, said Nick Rimedio, WHCC Chair.

“Among a strong group of candidates, we chose to endorse five who demonstrated the requisite understanding of how to best represent the West Hollywood business community and to effectively address the concerns of residents,” added WeHo PAC Chair, Sherri Franklin. “Our objective is to promote leadership with the commitment to balance the needs of all stakeholders, drive the growth development of the economy and to ensure that all aspects of the city’s social fabric thrive. We are endorsing a slate of candidates that we are confident can represent the city today as well position to lead in the future. West Hollywood is so fortunate to have so many great candidates step forward to run for Council and bring leadership and diversity to the bigger conversation of what West Hollywood means to its constituents and the world at large. We look forward to watching them thrive and develop a voice for our future.”

All candidates were asked the same questions in private PAC interviews conducted this past August:

1. How do you feel our current council is doing?
2. What policies have they implemented which you feel are good for the community and what
do you feel is detrimental to the community wellbeing?
3. What new policies would you propose to make West Hollywood more business-friendly and
more attractive to investors?
4. Do you support Unite Here Local 11? If yes, what tactics used in government are effective
and benefit the community?
5. Do you believe we need to find new funding for Public Safety Ambassadors and “Block by
Block”, or do you have another strategy for helping to promote safety for businesses and
residents?
6. Lack of affordability is a major driver of homelessness.
a. What types of subsidies and cost reduction measures would you work to implement
to help landlords and developers deliver more affordable rental and
homeownership opportunities?
b. How can the city take an active role in the development of affordable and workforce
housing?
7. Do you think our current policies of rent stabilization are sustainable and are they effectively serving the needs of the resident and helping seniors age in place.
8. Do you support commercial building moratoriums for developments such as hotels?

Incumbents John Duran and John Heilman, and small business owner Larry Block each won the endorsement of the WeHo PAC in 2020.

ABOUT THE WEHO PAC:
The purpose of the PAC is to engage in activities and funding to support or oppose candidates within the State of California and especially the County of Los Angeles and City of West Hollywood, consistent with the stated goals and objectives of its sponsor, the West Hollywood Chamber of Commerce.