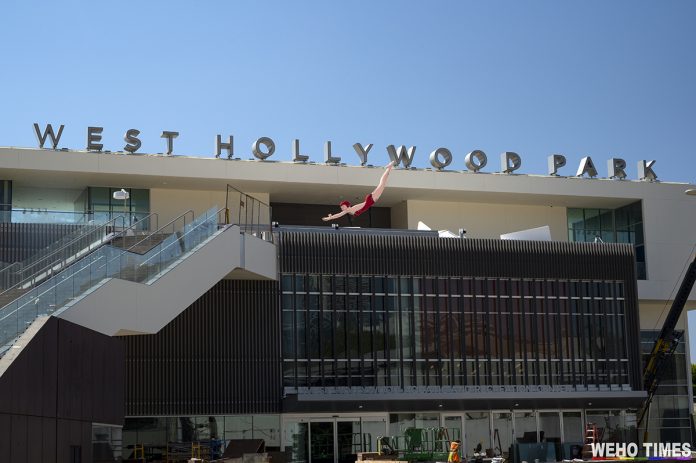 A giant crane lifted her to the sky. Construction workers caught her and carefully secured the famous art installation to her original base. She now awaits for an electrician to connect her wiring and bring her back to life by the new West Hollywood pools. 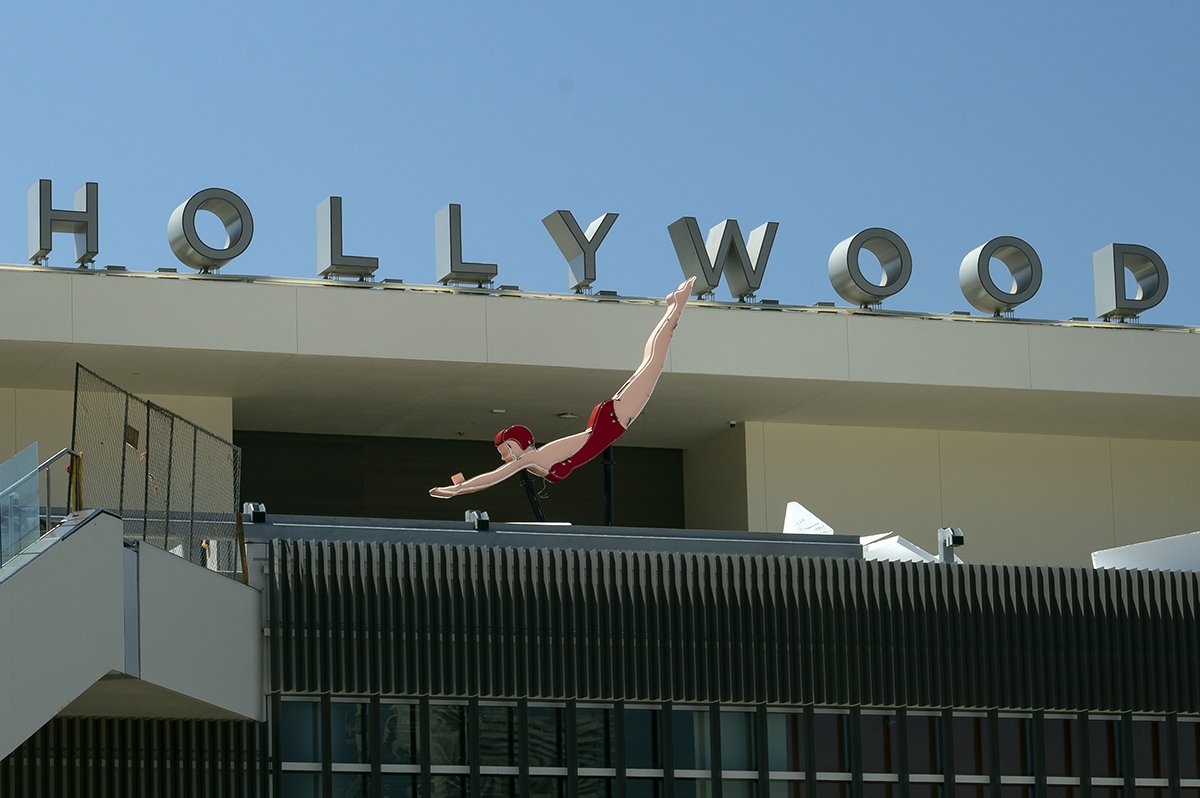 The WeHo Neon Diver was on display on Santa Monica Boulevard for the past five years. She was under the care of RLA Conservation of Art and Architecture, an art restoration service based out of Los Angeles.

The Virginia Court Motel Diver is a replica of a sign that was originally built in 1950 for the Virginia Court Motel in Meridian, Mississippi. The owner of the motel, Ike J. Davis, named the property after his daughter. In 2000, the motel was demolished, and the original sign was rescued by Mike Gambone. In 2002, the Diver was shipped to Mark “The Neon Man” Jamison in Virginia for restoration and display. In 2006 the Diver was restored again by Flexflume Sign Company. And, then finally in 2008, the diver was loaned to the Museum of Neon Art in Glendale, CA for display at their temporary location in Downtown Los Angeles.

The West Hollywood sign is a reproduction of the original sign, fabricated by Federal Heath, and was included in the City’s on route – 66 lights exhibition on Santa Monica Boulevard in 2010 in collaboration with the Museum of Neon Art. The neon sign is a part of the City’s Urban Art Collection and is installed outside of the entrance to the Aquatic Center at West Hollywood Park.

That sign is owned by West Hollywood. After being in storage for several years, the sign was temporarily installed in 2015 next to the West Hollywood Pool.

In 2014, a second replica of the Neon Diver was built for MONA and installed on the roof of the museum in Glendale

The history of the Neon Diver exhibition throughout the city of West Hollywood is as follows:

The new West Hollywood Park is making great progress. The four-level, 75,000-square-foot Aquatic and Recreation Center will feature two rooftop swimming pools, including a competition pool and a recreational pool, and a multi-sport court with bleacher seating and scoreboards that will accommodate a variety of sports. The building will also feature five community meeting rooms and one conference room, City of West Hollywood Parks and Recreation staff offices, a Tiny Tot program classroom, a public access television studio, lockers, and additional parking.

Wonderful news! I miss seeing her on the boulevard, but happy she is back by the pool where she belongs. Does anyone know when this park is going to open already?