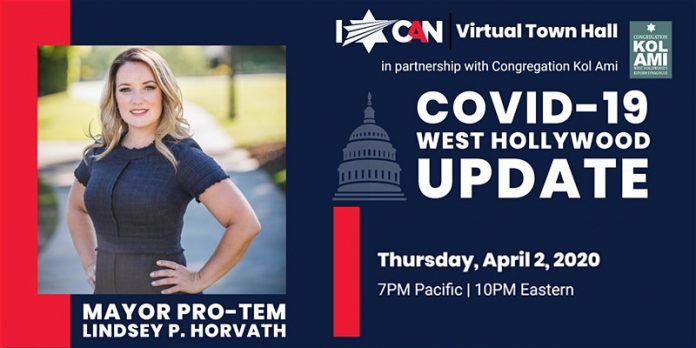 The Israeli-American Civic Action Network (ICAN), and Congregation Kol Ami are hosting a virtual town hall on Thursday, April 2nd, 7pm Pacific / 10pm Eastern, to discuss the latest developments related to the COVID-19 pandemic. The online-only town hall will include West Hollywood Mayor Pro Tempore, Lindsey Horvath, who will discuss COVID-19’s impact on city residents, and what a “new normal” might bring to the community.

The Israeli-American Civic Action Network is the only Israel advocacy organization with a domestic and foreign policy agenda working in cities, states, and nationally, mobilizing Israeli immigrants, American supporters, and allied communities, engaged in advocacy education, civic action, and campaigns elections. ICAN was founded in 2018 to bridge a growing divide between American policymakers and Israel. It joins Israeli immigrants with American supporters to lead grassroots advocacy efforts.

Founded in 1992, Kol Ami has become an important leader in the Jewish, LGBTQ+, and West Hollywood communities. Their commitment to progressive spirituality, diversity, inclusion and social justice has been celebrated nationwide. Kol Ami, West Hollywood’s premier Reform synagogue, has grown to be an award-winning congregation by daring to be innovative while remaining rooted in Jewish tradition and practice.

Mayor Pro Tem Horvath has a long history of civic and social justice advocacy. She has spearheaded policies to make West Hollywood an “Age-Friendly Community” to better serve residents of all ages. She also led the City to become the first in the nation to impose financial sanctions on Arizona for its discriminatory, anti-immigration SB-1070 law. Mayor Pro Tem Horvath created the first-ever West Hollywood Community Response Team to Domestic Violence. She initiated City policies to support workers, including paid family leave, student loan debt relief, and transition guidelines for the workplace to provide a supportive working environment for transgender people.

Mayor Pro Tem Horvath is widely known for her leadership on women’s issues and has served as a Global Coordinator for One Billion Rising, a global campaign of the V-Day movement to end violence against women and girls. She is also an advocate for A Window Between Worlds, UN Foundation, and A Place Called Home, which presented her with their GirlPower Community Leadership Award in 2016. Women’s March Los Angeles has featured her as a speaker every year. On the Women’s Advisory Board, she focused on issues facing women and families in West Hollywood, and collaborated with community leaders and organizations in successfully advocating for the full funding of the backlog of untested rape kit evidence in the City and County of Los Angeles.

She is a champion of LGBTQ+ rights. As Mayor, she created a Resource Guide to support LGBTQ youth, which was made available in the City Halls of all 88 cities in LA County. Mayor Pro Tem Horvath’s transition guidelines policy was adopted by the California Attorney General’s office under Kamala Harris. She served as a Board member of the Victory Fund Campaign Board and was a founding Board member of the NOH8 Campaign. Lindsey focused on issues facing LGBTQ older adults while serving on the Board of Services & Advocacy for GLBT Elders (SAGE). She served as Communications VP for Stonewall Democratic Club, which presented her with the 2019 Morris Kight Presidential Award in recognition of her outstanding leadership and steadfast support of the LGBTQ community and the organization. In 2009, she represented the City of West Hollywood in the National Equality March in Washington DC.