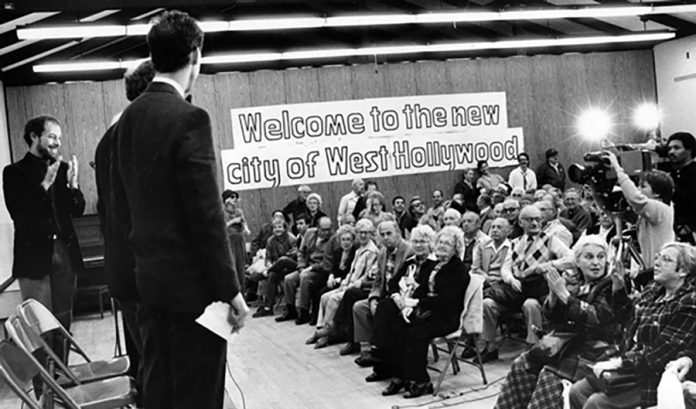 The City of West Hollywood turns 34 today. WeHo Mayor, John Duran, took to social media to wish the city a happy birthday with a little history lesson. He posted the following on his Facebook page today:

Happy Birthday to the City of West Hollywood. The city was born officially today – 34 years ago.

It remains a Mecca for LGBT people. It is still a sanctuary for refugees from the Ukraine to Latin America. It has always been a Bohemia to the outlandish, the flamboyant, the non conforming, the brazen and those who were persecuted for being different.

It is a small town with big city issues. Yes. We have our share of traffic, homelessness and crime – because we are in the second largest metropolis in the nation – Greater Los Angeles with 14 million people.

But we also have our neighborhood cafes, gyms, nightclubs and restaurants – where we greet one another in a small town manner

Only 8% of cities in this nation could boast economic surplus during the last recession – Weho was one. And we are building new parks, libraries and know that the average life span of a pothole in Weho is 24 hours or less ! (And before you start sending me pictures of potholes or buckled sidewalks – I can already tell you that they are in LA proper – and not Weho!)

All in all – a job well done to the citizens of Weho of yesteryear and today !

When you travel west on Santa Monica Blvd and hit La Brea – it gets ….. well ….. pretty ! No telephone poles. Beautiful trees and cafes and people everywhere.

And when you travel east on Sunset Blvd and cross 9200 Sunset to enter ‘The Strip’ – gone is sleeping Beverly Hills as you hit the Roxy, Rainbow, Whiskey and Viper – you know you’re in the area where Judy Garland, Frank Sinatra and Sammy Davis Jr. , Lena Horne, Marilyn Monroe, Jimmy Dean and Sal Mineo, Jim Morrison, Cheech and Chong, Rocky Horror, Sonny and Cher and Axle Rose called home.

Happy Birthday Weho! Long may the ‘creatures of the night’ reign!”