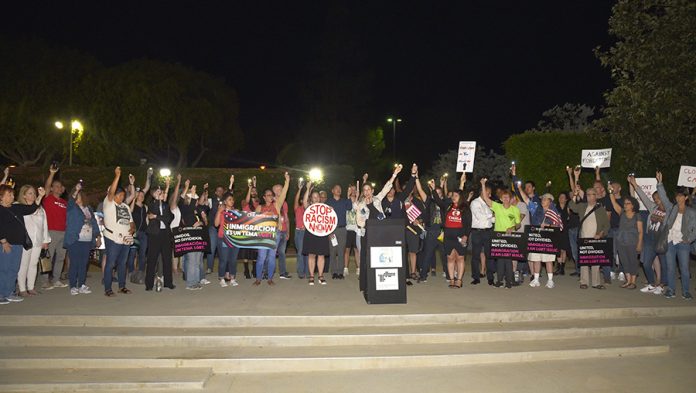 The Entire West Hollywood City Council joined ROAR Resistance, Hollywood NOW, the Human Rights Campaign Los Angeles (HRCLA), the Stonewall Democratic Club, the Westside Democratic HQ for the Lights for Liberty vigil on Friday, July 12. There were over 800 other demonstrations around the world shining a light on the horrific abuses by the Trump administration’s inhuman detention camps. The events took a stand and voiced a belief that all human beings have a right to life, liberty and dignity.

The WeHo Lights for Liberty rally and vigil was be held at West Hollywood Park, in the paved area alongside San Vicente. An estimated 100 people showed up at the event. It was facilitated by Abbe Land and Michael Ferrera with the help of John Erickson, Karen Andros Eyres and the West Hollywood staff. 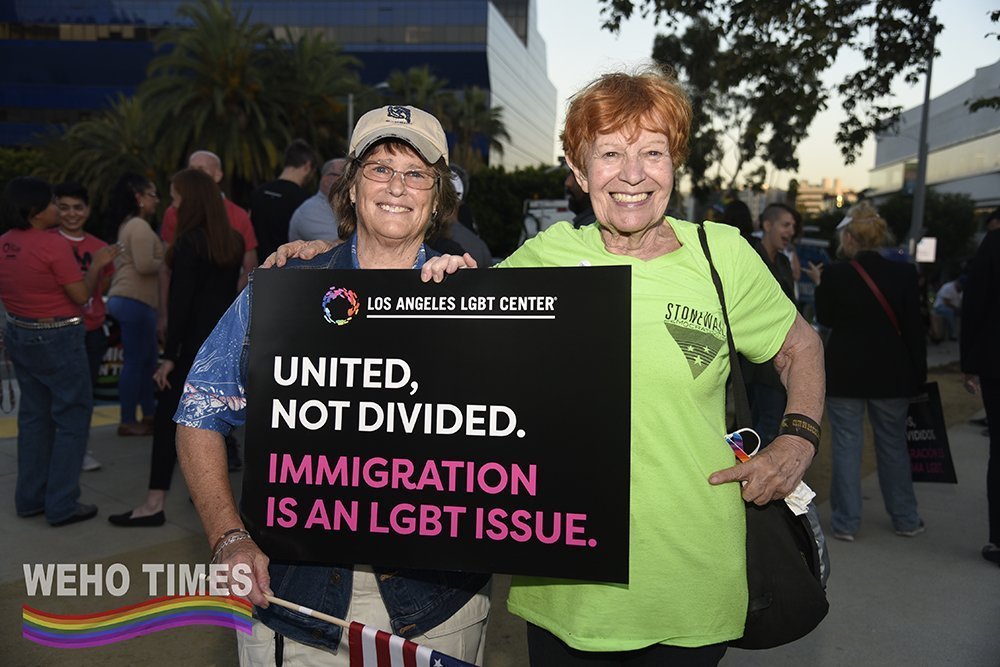 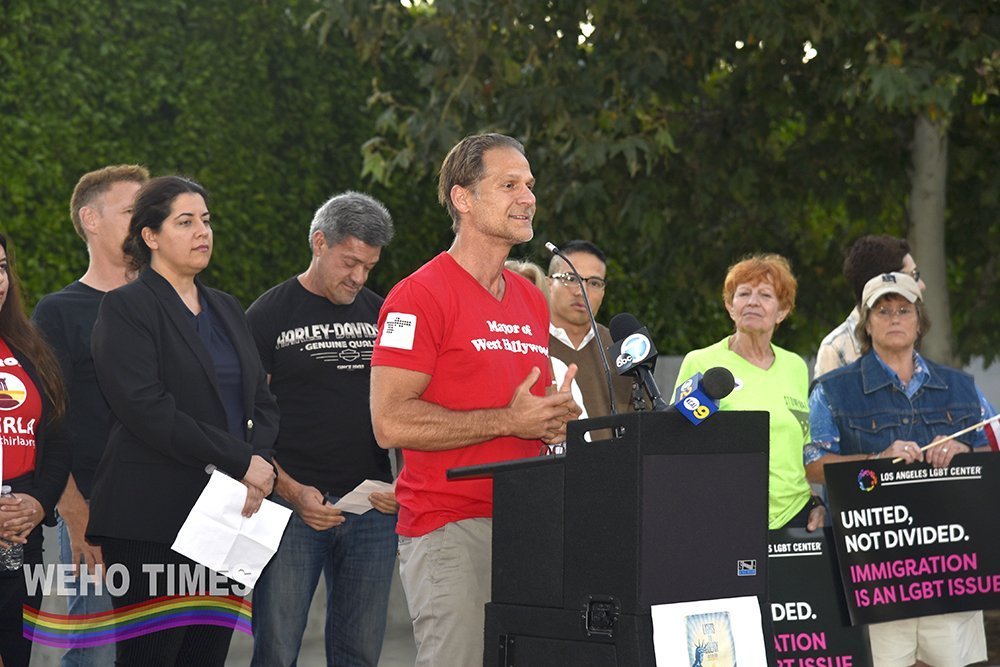 “I’m so excited and sad to be here,” D’Amico said from the podium. “We are not this country. This is not who we are. We don’t lock up children. We don’t gather our friends and rip them from our families. We just don’t do that… I will continue to do all that I can to make sure that every person in America is treated fairly, with care and with calm and with our courage and our work we can make sure that happens.” 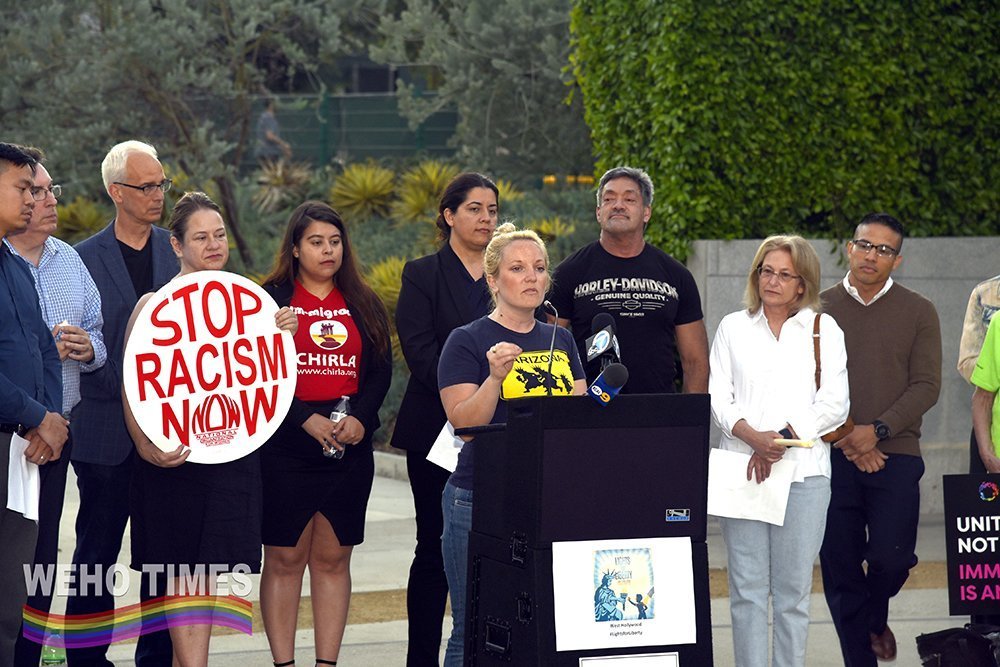 Mayor Pro-Tempore Lindsay Horvath followed D’Amico’s speech. “It is absolutely unconscionable what is happening at our border,” she said. “Not only here in California, but in Texas and all along our American border. We know that families are being separated. Children are being taken from their parents, are being violated and assaulted in ways that are absolutely unimaginable and unspeakable. It is wrong and it needs to stop.” 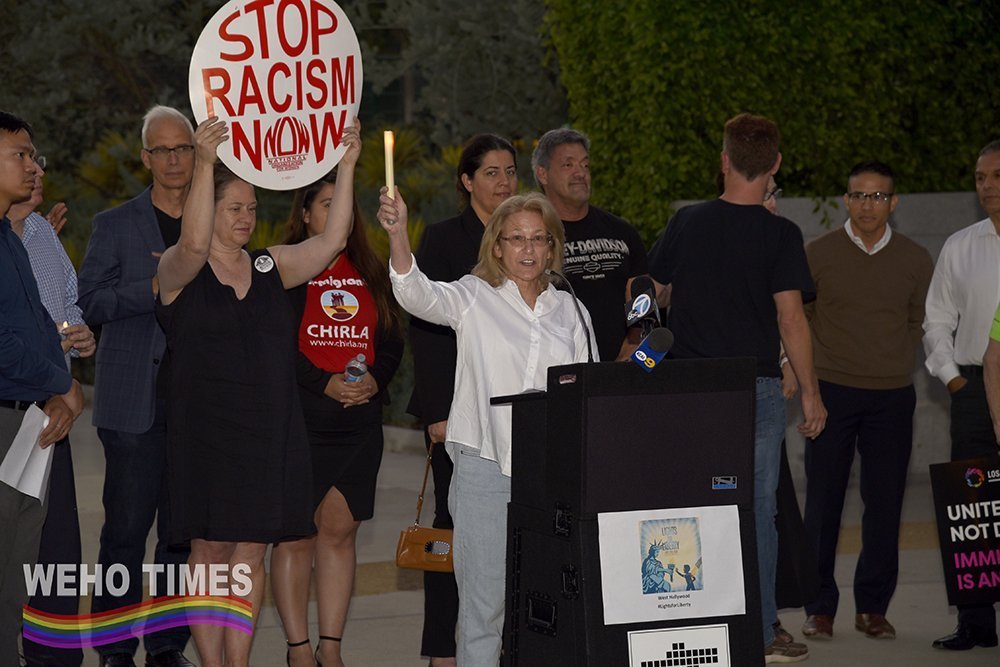 Council member Lauren Meister read “The New Colossus,” by American poet Emma Lazarus, who wrote the sonnet in 1883 to raise money for the construction of a pedestal for the Statue of Liberty. In 1903, the poem was cast onto a bronze plaque and mounted inside the pedestal’s lower level— “…Give me your tired, your poor, your huddled masses yearning to breathe free, the wretched refuse of your teeming shore. Send these, the homeless, tempest-tost to me. I lift my lamp beside the golden door.” 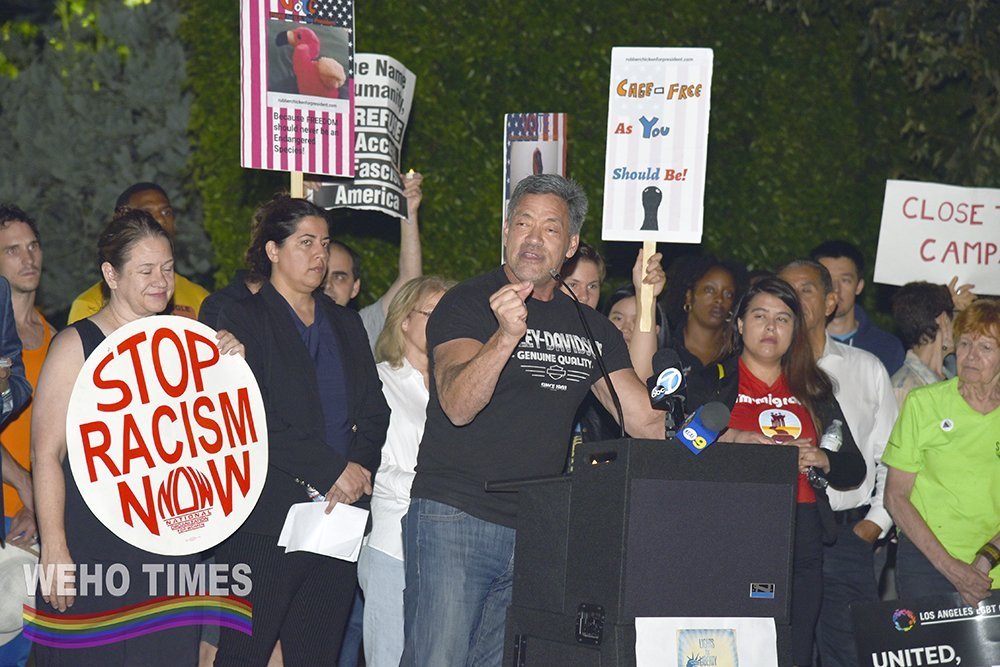 Council member John Duran introduced himself as the only Latino elected into the West Hollywood city council. “These are very strange times that we live in,” he said. “The religious right who loves to quote Leviticus to me about the sin of Sodom and Gomorrah; they love to quote The Bible to me every chance they get about the gospel of Matthew. They perhaps forgot that in Leviticus it states: ‘Do not forget to treat a foreigner as if it’s your family, for remember that you were once foreigners in the land of Egypt.’ That is straight out of Leviticus. In Matthews it says: ‘When I was hungry, you gave me to eat. When I was thirsty, you gave me to drink. And when I was a stranger in a land, you invited me in.’ How is it that the Religious Right and the Vice President who calls himself a good Christian man, stands by idly while children are placed into cages, children are ripped from the arms of their mothers, families are separated, and they sit and they watch it idly and they think that it’s good politics?” 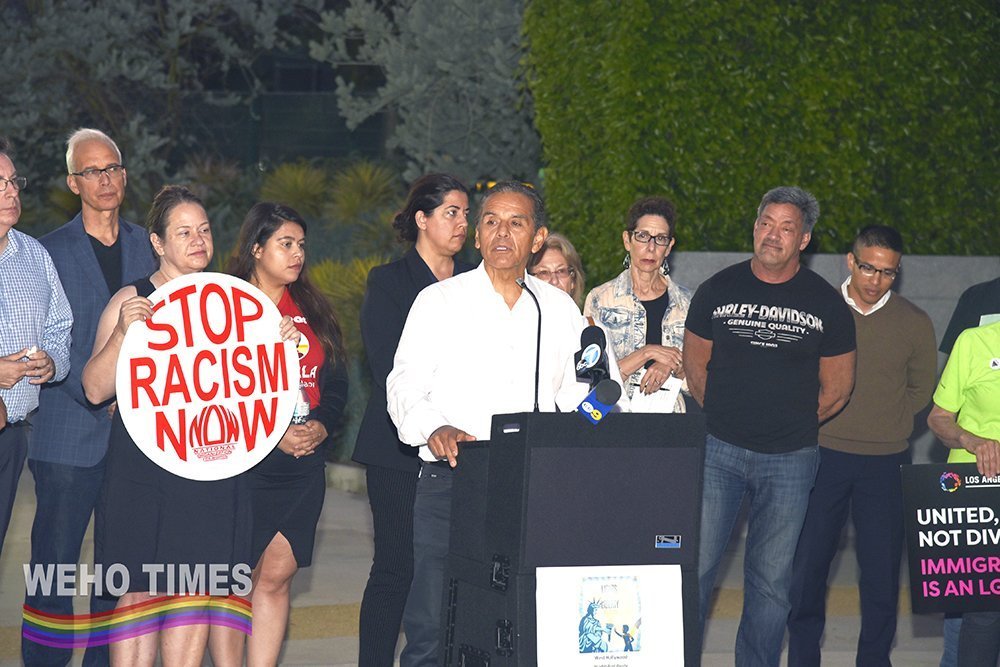 Another Latino elected into office was former Los Angeles Mayor Antonio Villaraigosa, who showed up to show solidarity with the city of West Hollywood. “We’re standing up for human beings who are at the border, children who are lying on cement floor without a toothbrush, toothpaste… without a bar of soap. Six of them have died, either in custody or leaving custody. More than two dozen immigrants have died in the last year alone. These facilities were never meant to house the number of people they are housing today. And yet we have a man in the White House that continues to demonize these human beings. I remember not so long ago…when there were a million immigrants at [Los Angeles] City Hall. I remember saying, ‘I don’t see undocumented people here. I don’t even see immigrants necessarily. I see human beings.’ And that’s what we’re talking about. These are human beings. Under the United Nations, human beings in this world have a right to seek asylum… and yet these people who come to our border are treated as criminals…It’s really important that come here today. It’s really that we come and say united not dived. Immigration is a LGBT issue. Close the camps. Again, we will never forget.”

Among the speakers was Melody, a DACA immigrant and member of the Coalition for Humane Immigrant Rights (CHIRLA). Melody shared her story about coming to America at the age of nine and growing up in Los Angeles. She also led the crowd with some chants–“Say it loud! Say it Clear! Immigrants are welcome here! When I say immigrant! You say power! Immigrant! Power!” 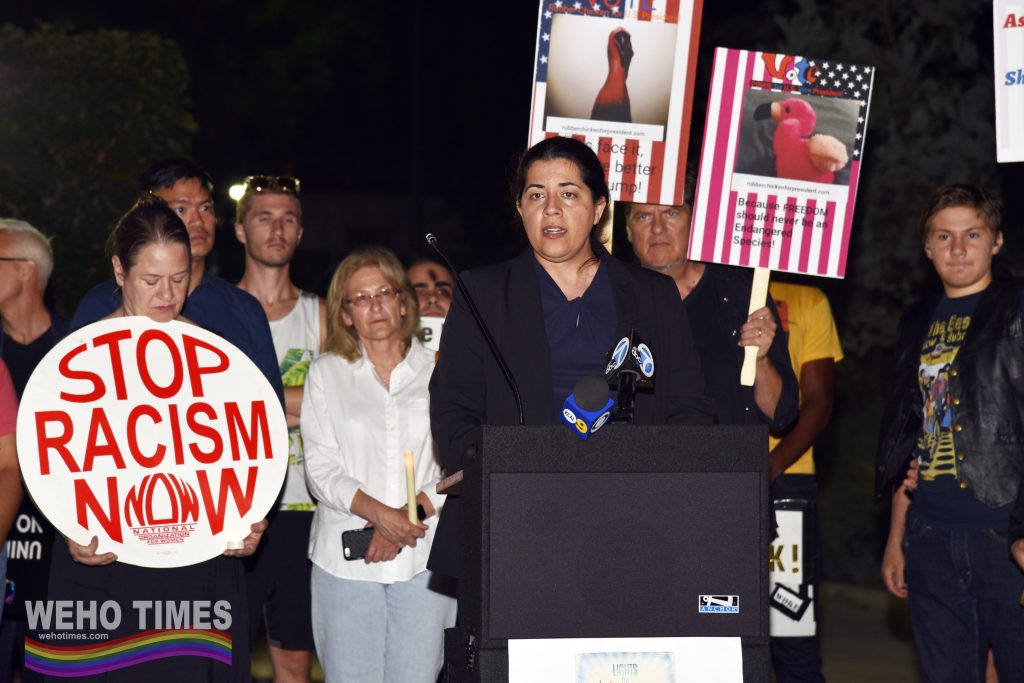 Former West Hollywood City council candidate Sepi Shine shared about the challenges she faced as an Iranian immigrant and the terror she felt as a three-year-old girl fleeing a war torn country—“Despite the challenges that I faced as an immigrant, being here and becoming a resident and then a citizen gave me many freedoms that people in other countries do not have: the freedom to follow the American Dream; the freedom to speak against the current administration without the fear of being thrown in jail. The freedom to marry my wife. I take these freedoms as a privilege and a duty. We who enjoy these freedoms all have a duty to be beacons of light for liberty for those who do not have it.” 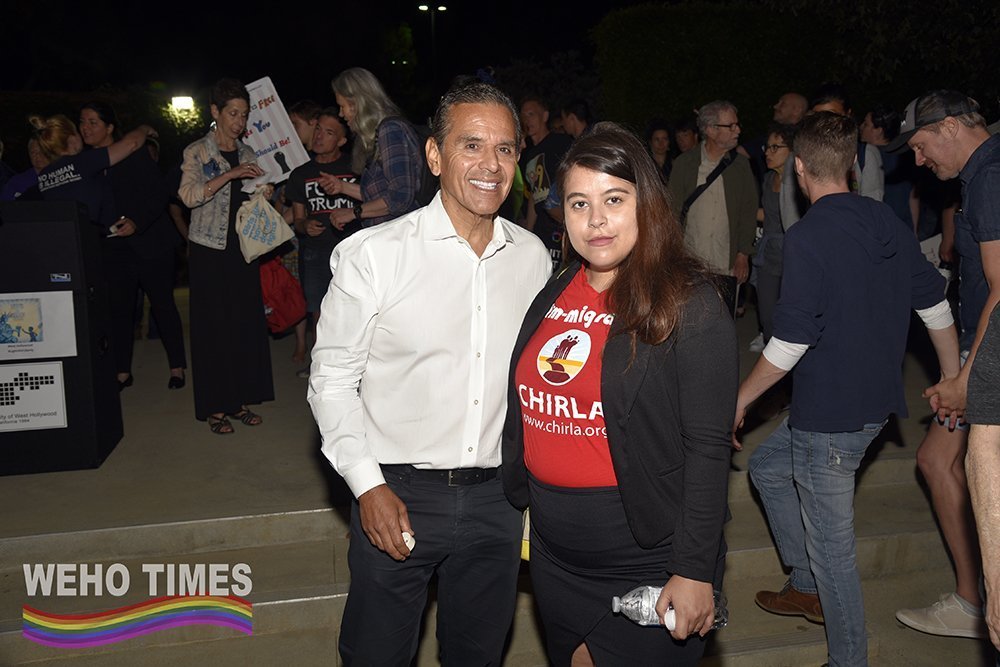 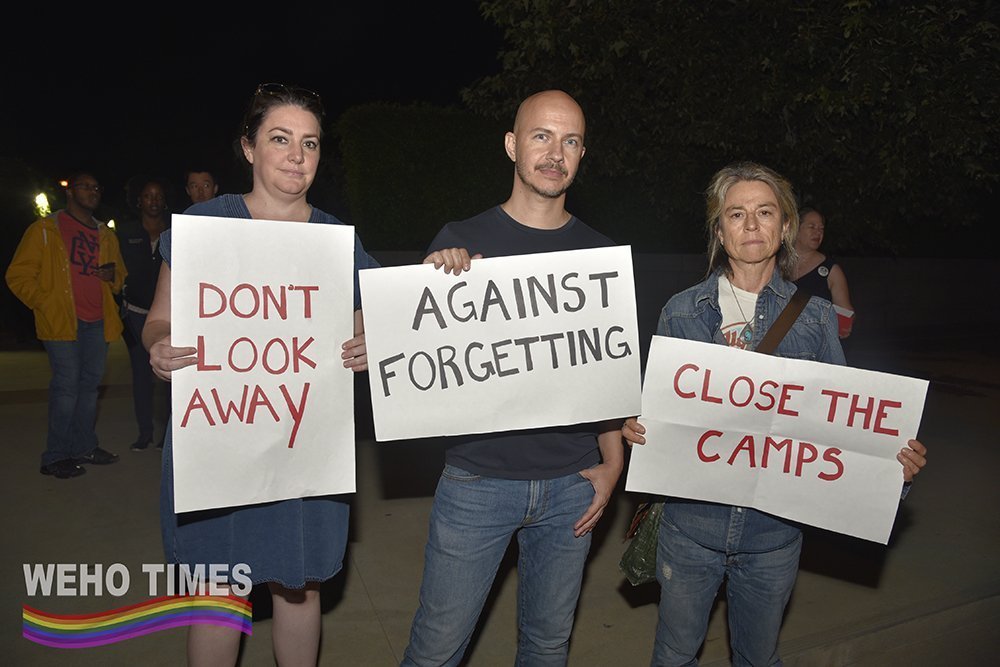 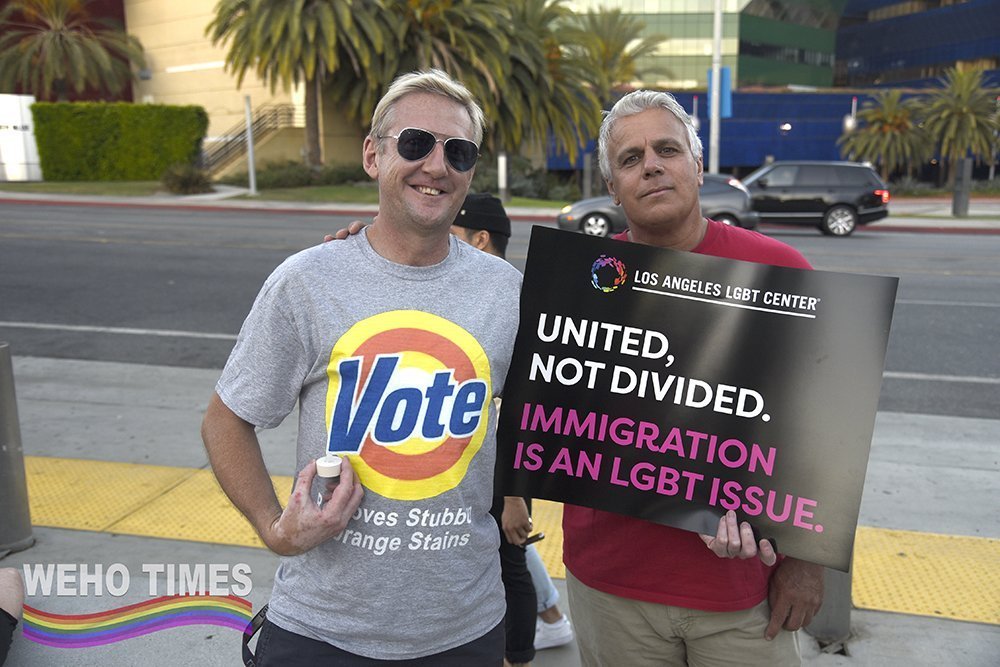 Lights for Liberty is a coalition of people, many of whom are mothers, dedicated to human rights, and the fundamental principle behind democracy that all human beings have a right to life, liberty and dignity. They are partnering with international, national, regional and local communities and organizations who believe that these fundamental rights are not negotiable and are willing to protect them. Friday’s Lights for Liberty: A Vigil to End Human Concentration Camps, brought thousands of people to locations worldwide as well as to concentration camps across country, into the streets and into their own front yards, to protest the inhumane conditions faced by migrants. 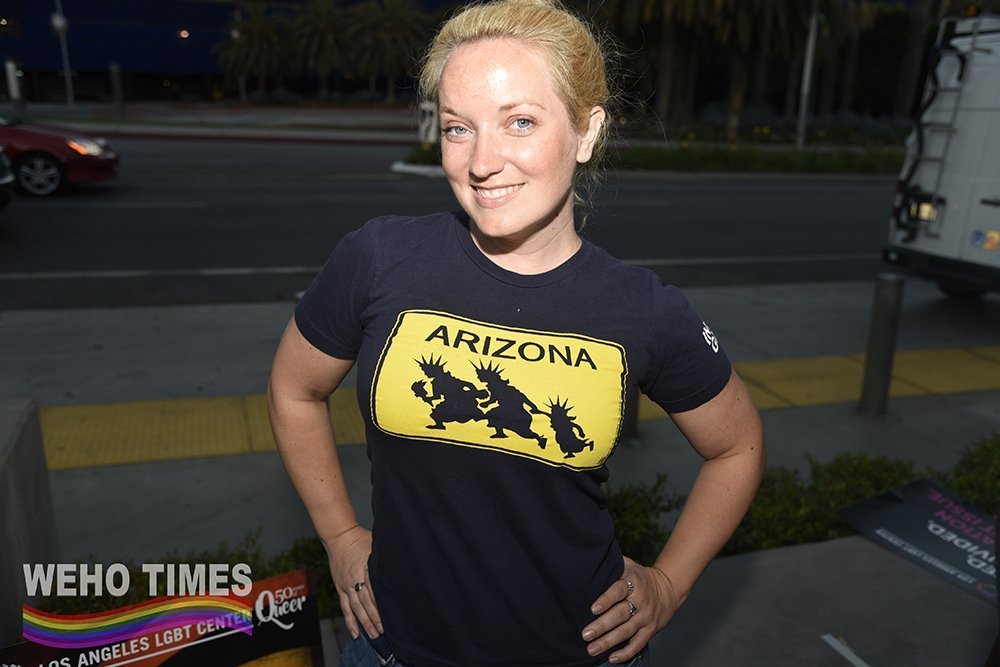 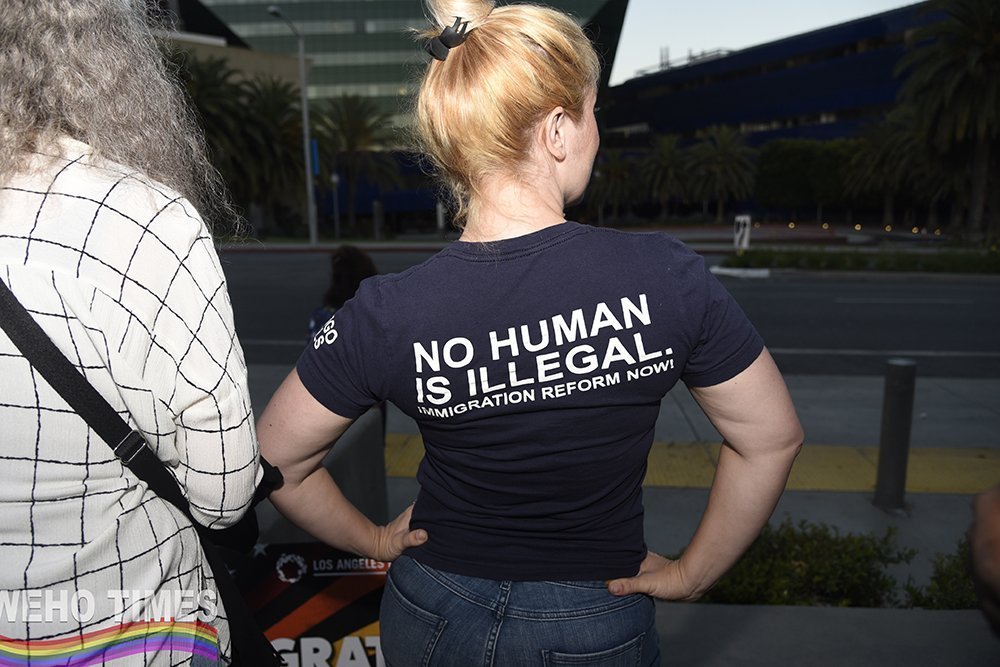 To learn more about Lights for Liberty, visit: https://www.lightsforliberty.org/

It’s the same detention centers as when Obama was president. You don’t want you or your child detained, don’t enter a country illegally. Every country has laws in place when it comes to immigration. Without laws you have chaos. And that is what’s happening now with thousands rushing the border. When you’re seeking asylum, you are supposed to seek it from the very next country you encounter – not go through one country to get to the country of your choosing. It doesn’t work that way.

That is a whole lot of B.S. There were processing centers for unaccompanied immigrants before the Trump administration. What we have now is privately-run concentration camps where we are warehousing people who would have been processed by now under any other administration in inhumane conditions. And that includes children who were forcefully separated from their parents. This is all done intentionally to discourage others from coming to the US and seeking asylum. None of these people have broken any laws. Your claims about what US or international law is on asylum are entirely wrong. But thank you for sharing the… Read more »

You need to read up.