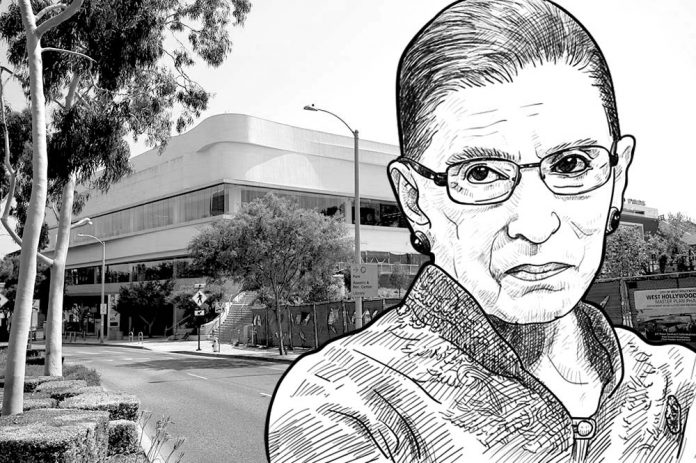 The City of West Hollywood is conducting a community survey to solicit public input about a naming request to rename the West Hollywood Library in honor of Supreme Court Justice Ruth Bader Ginsburg. Community participation in this survey is an important part of the engagement process and feedback is essential.

In accordance with the City’s Naming Policy, there are established uniform procedures that guide the nomination, consideration, justification, and review of naming City-owned or leased land, buildings, or facilities. In December 2020, this naming request was approved by the West Hollywood City Council. The City Council item from December 21, 2020 to request to rename the library after Justice Ruth Bader Ginsburg is posted as part of the City Council agenda; the item is available at: https://weho.granicus.com/MetaViewer.php?view_id=22&clip_id=3583&meta_id=197616.

Justice Ruth Bader Ginsburg is the only name that was nominated. The survey does not ask input on any other name.

City staff will return to the Public Facilities Commission with the survey results and official actions, and the Commission will, then, conduct a Public Hearing (date to be determined). Staff will also share recommendations about signage, identification options, and cost estimates. A Public Hearing will provide an opportunity for Commissions and Advisory bodies, civic organizations, and members of the public to offer relevant testimony as related to the naming request. The Public Facilities Commission will, then, prepare its recommendation on the naming request for submission to City Council. The City Council will make its final determination on the naming request at a future regular meeting, date to be determined. The Public Hearing and City Council meeting will be posted on the City’s meetings and events calendar atwww.weho.org/calendar.

The library should not be named after Ginsburg leave it to a federal government to name a federal
Courthouse in the justice’s name. In my opinion have locals that had an impact in the county or state and gave their lives in LA County for public issues or civic causes.

Yes but how will anyone agree to whom that should be???