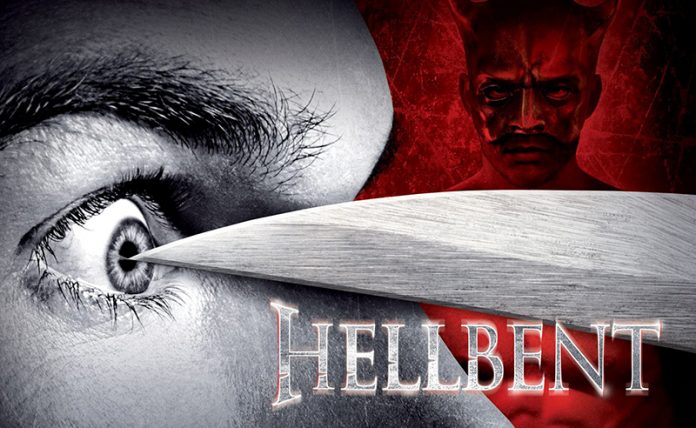 Here’s something to watch for Halloween. Billed as the first ever gay horror slasher film in 2004, the movie Hellbent takes place at the famed West Hollywood Halloween Carnival (cancelled this year due to COVID) with a serial killer on the loose slashing, dicing and slicing queens all over Santa Monica Boulevard. The HERE! production is now streaming on Amazon Prime.

The slasher film stars Dylan Fergus, Bryan Kirkwood, and Hank Harris. It is directed by Paul Etheredge. It comes from the co-creator of Halloween and the executive producer of A Nightmare on Elm Street.

The synopsis for Hellbent is as follows:

The night before Halloween, a gay couple are making out in a car when a bare-chested killer in a devil mask appears and decapitates them with a sickle.

Halloween finds Eddie at his job as a police technician talking with his police officer sister. He distributes flyers about the murders and dresses in his father’s police uniform for a Halloween costume. While distributing the flyers, he meets Jake in a tattoo shop.

Eddie meets with his friends Chaz, Joey, and Tobey, and they head for the West Hollywood Halloween Carnival. They visit the murder scene, where the devil-masked killer appears. They taunt him because they think he is cruising them.

Eddie and his friends enter the carnival, and Eddie sees Jake coming in as well. Eddie leaves to find Jake. Joey sees a man on whom he has had a crush on for weeks entering one of the dance venues. Chaz encourages Joey to talk to the man, but when he does Joey is cruelly turned down. Chaz goes to the restroom with Joey to console him, then waits for Joey outside. Chaz takes ecstasy and leaves when he sees an attractive man walk past. Joey’s crush comes into the bathroom and apologizes, leaving Joey ecstatically happy. Just then, the killer emerges from a bathroom stall and decapitates Joey, taking his head as a trophy.

And the you’ll have to see who else dies for yourself if you dare.

Hellbent is available on Amazon Prime at: https://www.amazon.com/Hellbent-Dylan-Fergus/