The world famous WeHo Halloween Carnival was defunded and canceled last night at the regular city council virtual meeting. Public health and safety during the COVID-19 pandemic were major factors in the cancellation as well as fiscal challenges the city is facing towards the end of the year. The Halloween carnival is in a long list of city-sponsored events that will not be happening in 2020.

“We want to look at events from both a health and safety perspective and also an economic perspective as we go into a deep dive with next year’s budget with some initial fiscal challenges,” West Hollywood City manager Paul Arevalo said at the virtual meeting. “If we were to cancel the major events going up through December 30th and the two big events would be obviously LA Pride at 3 million, and Halloween at 2.4 million and there other events as well, but the cost of those events would be in the neighborhood of 6 million dollars.”

Arevalo said that he believed social distancing will still be in place during the coming fall and that we will most likely see a major spike in COVID-19 infections. He said the City of West Hollywood  does not want to contribute to the numbers rising with a Halloween Carnival or other major events.

Council member John Heilman said with respect to the WeHo Halloween Carnival, that there are going to be people on the street, no matter what. “We’re probably going to look at some kind of additional law enforcement costs even if we cancel the official city sponsored event. We will still have additional people on our streets and sidewalks, unless we’re in the heat of the pandemic or we have another outbreak.”

WeHo Mayor John D’Amico gave a receive and file direction to craft language that will give direction to defund these events and the City Manager will come back with an item that cancels them officially in the future.

“The thought of gathering 500,000 people on Santa Monica Blvd during an ongoing pandemic was just not possible,” council member John Duran posted on his Facebook timeline. “I did ask that we consider having Halloween still occur within nightclubs and bars with proper social distancing and face coverings. It’s the new reality for this year. And actually, maybe Halloween will become once again a gathering for Wehoans and our friends as a community – rather than playing host to all of Los Angeles County. The Halloween spirit will continue. Just a lot slimmer than years past. And you know what – maybe more of “just us” who live, work and play here?”

There was no mention of LA Pride event being canceled at this time, which has been currently postponed.

Jeffrey Sanker’s White Party is scheduled for Halloween night. The cancellation of WeHo’s Halloween Carnival may pressure the gay party event to do the same.

The City provided the following list of city-sponsored events that have either been cancelled or postponed through the end of June. 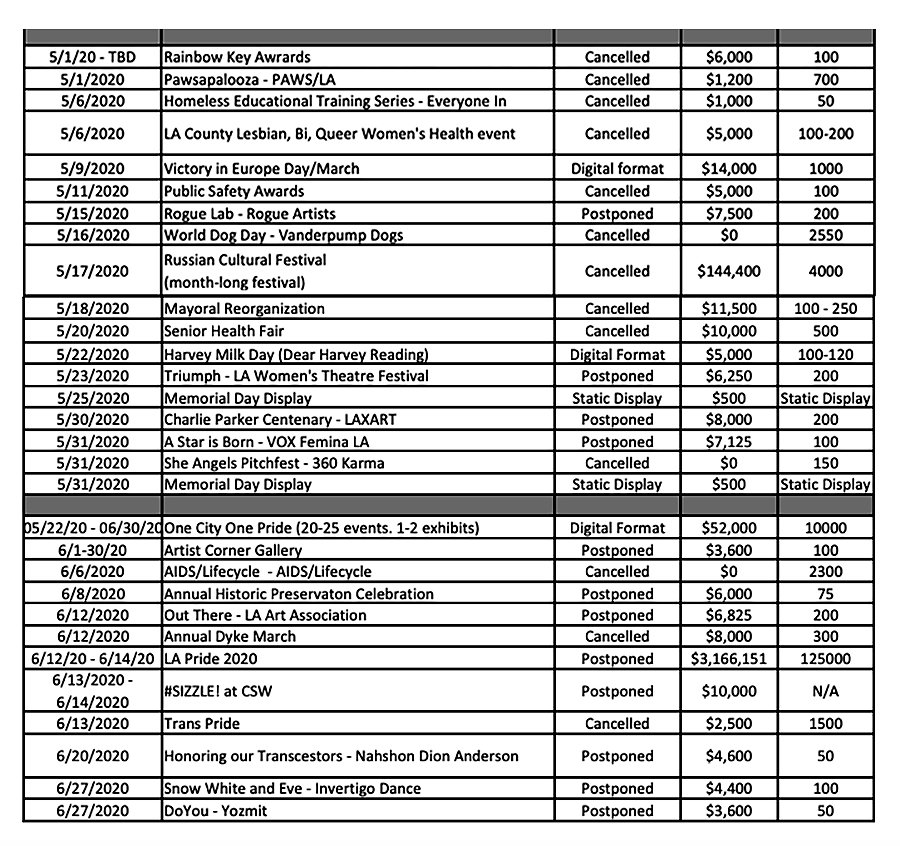 After publication of this article, the City of West Hollywood clarified its position. While the council agreed it was best to defund/cancel Halloween in the fall at the Monday May 4, 2020 City Council meeting for sake of public safety, the City wants to clarify that, “no specific determination has been made at this time.”

Below is the City’s statement.

The City of West Hollywood’s number-one priority is public safety. The City is taking regular extensive steps to support the community during this unprecedented time and the City is looking at the feasibility of events concurrent with developing direction from public health officials. The City is also mindful of planning for budget impacts resulting from the economic impacts of the coronavirus crisis. As Los Angeles County Safer At Home and State of California stay-at-home directives evolve into new phases, the City of West Hollywood will determine next steps for responsible action that ensures physical distancing to reduce disease transmission and regards the highest levels of health and safety precautions for community members, including residents, businesses, and visitors.

The City of West Hollywood’s City Manager is anticipated to bring forth a recommendation, following careful staff analysis, regarding event closures through the end of the 2020 calendar year as an item on the agenda of a West Hollywood City Council meeting in June 2020. Updates and details will be provided at www.weho.org/coronavirus.”