Gelson’s Market, particularly the one in West Hollywood, is not exactly known for its bargain basement pricing–however, some WEHO TIMES readers have complained that they’ve noticed the prices at their neighborhood market have risen much higher than normal during the COVID-19 pandemic.

“I complained to Gelsen’s headquarters that their people were not wearing gloves and masks while handling food and that the prices had been raised to take advantage of WEHO  residents,” Tom Wright wrote to WEHO TIMES via email, “Price gouging occurs when a seller increases the prices of goods, services or commodities to a level much higher than is considered reasonable”

Another reader sent us a link to Twitter, where user @AnkurKamdar, called out the location at 8330 W. Santa Monica Blvd., for price gouging with a short video clip on April 19. The clip shows the number seven label being peeled off on a $7.99 price tag for toilet paper, to reveal a label for $5.99 underneath. The bath tissue being sold for $8.75 after tax, is a thin off-brand called Fiora.

The Twitter footage prompted a response from West Hollywood Mayor John D’Amico, who tweeted: “Copyin [sic] our city – @WeHoCity – so that code compliance can looking into this. Thanks.” 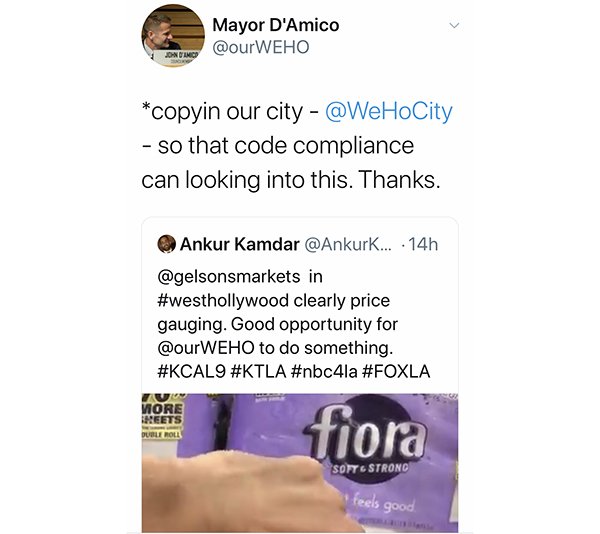 A visit to the WeHo location on Tuesday, April 21, at around 2pm, found the same Fiora brand toilet paper stocked on the shelves (let us note that most super markets are out of bath tissue by this hour in the afternoon). However, the $7.99 prices had been removed from all the shelves. A price check at the register confirmed that a 12 count of Fiora tissue paper is being sold for $7.99 plus tax. 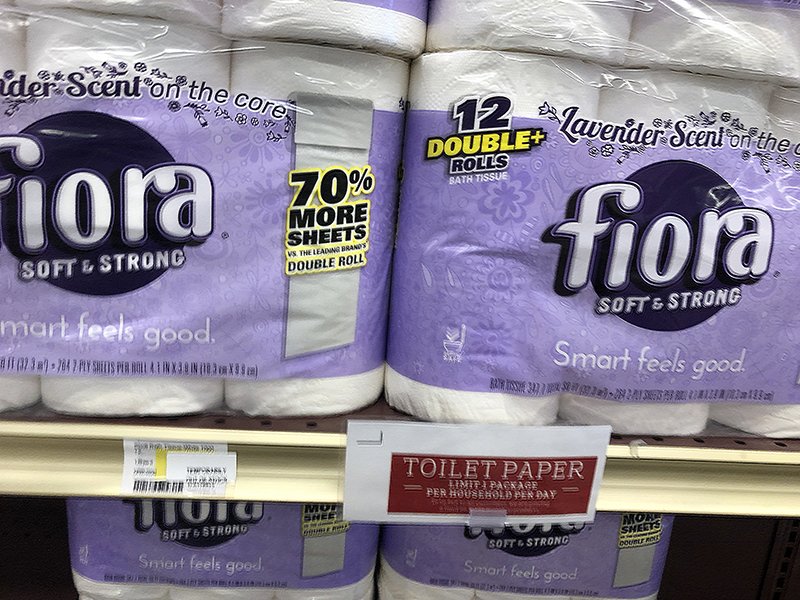 There was a debate on Twitter on whether or not Gelson’s Market could up their prices during shortages. Some users felt that if there is a shortage in toilet paper, it’s possible prices have gone up, causing a domino effect for markets to raise their prices.

“Think that is compliant,” @nikroybal, responded to Mayor D’Amico. “They can raise it % [sic]. The ordering costs could’ve gone up.”

“If their cost went up exactly $2, sure,” Ankur Kamdar replied. “Otherwise no. Also it’s like this on every paper good in the store.”
A visit to the Smart & Final WeHo supermarket that same day, located approximately 1.2 miles east, on the corner of Santa Monica and N. Fuller Ave, found the exact Fiara brand with the same count, selling for $5.49 a 12-pack. 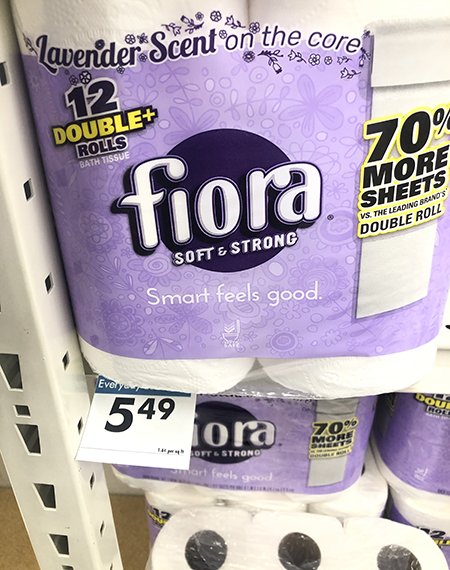 “After reviewing the images on twitter, I just wanted to clarify that the $5.99 tag was for Scott Toilet Tissue and not for the Fiora bath tissue in discussion,” a Gelson’s Market representative said in response to our request for comment. “Gelson’s did not raise the price on Scott Toilet Tissue from $5.99 – it is not currently on Gelson’s shelves because they are unable to get it. Gelson’s buyers are working hard to find alternative suppliers and do everything they can to supply hard-to-find items like bath tissue during this crisis for their customers. They were able to find the Fiora product as part of those efforts. But as is sometimes the case, they had to buy the Fiora product through a distributor, which means their cost of the product is normally higher than it is for other much larger retailers like Smart & Final.”

It is unclear why the $7.99 prices were removed from the bath tissue aisle. It was clearly visible in the video tweet three days prior.

The rep wants to assure our readers that Gelson’s Market is not violating any price gouging rules.

“It’s also important for you to know that Gelson’s instituted an additional process to tightly control all retail changes when the stay at home orders began to verify that they would not make any changes that would violate, or even give the perception of violating, any price gouging rules,” the rep said. “This process requires a review of all changes by several people and they will maintain these controls through the crisis.”

Regarding my Mr. Wright’s complaint back on March 28 when he says he spotted a man handling vegetables without wearing gloves, Hee-Sook Nelson, Vice President, Team Development and Public Affairs responded with the following email that was forwarded to WEHO TIMES: 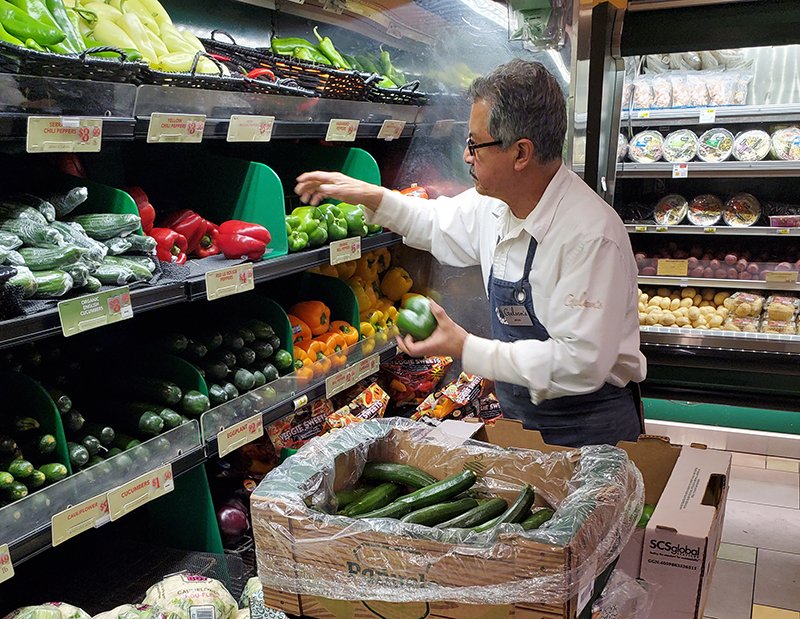 “I received the photo of our employee you stated that was not wearing a glove,  In the photo you sent, the employee is not in violation of health codes or CDC guidelines. Your original email said that he was cutting vegetables. I checked with our quality assurance director and was told that trimming produce, before being placed on the shelf is not considered food prep and does not require a glove.

The Health Code states that “Glove usage is only intended for the handling of unpackaged, ready to eat food; gloves are optional use when handling raw or not ready to eat foods. Hand hygiene is more effective for the control of the spread of viral agents”, this is stated in Cal Code.

The company has decided that wearing gloves is optional, as we want to encourage handwashing and sanitizing. Every department is provided with a sink, soap and water to wash their hands (as required by law) and sanitizer. All checkstands are equipped with hand sanitizer. Handwashing is considered the best way to prevent germs from spreading.

We are a food establishment and want to assure you that we would never willfully violate the CDC or Health Department regulations and continue to follow their guidance.”

Everyone is now required to wear masks when entering Gelson’s, including all of its employees. Gloves are still optional for those not preparing food. All the employees seen on the floor on April 21, opted to wear protective gloves.