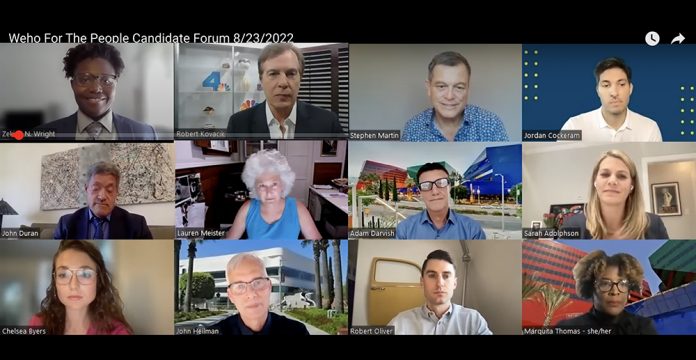 Don’t be swayed by the slant. In case you missed it, watch the WeHo for the People West Hollywood Candidate Forum for yourself and make up your one mind. The West Hollywood Chamber of Commerce (WHCC) sponsored candidate forum 2022, co-sponsored The League of Women Voters of Greater Los Angeles, is now available for playback via the WeHo Chamber’s YouTube channel. The forum, moderated by NBC4 Anchor and Reporter, Robert Kovacik, took place virtually on Tuesday, August 23 from 5:00 to 7:00 p.m..

Three City Council seats will be decided in the upcoming General Municipal Election. City of West Hollywood Council members each serve for a term of four years and are elected at large. Each year, City Council members select one of their members to serve as Mayor for a year, with the term beginning after the City Council reorganization, which occurs once every year.

There are twelve (12) City Council candidates who were invited to participate. Each candidate was given a series of questions in the following categories of Public Safety and Homelessness, Economic Climate and Community Vitality, Development and Land Use, Governance and Ethics, and Transportation.  All questions will be rotated in random order for fairness, and candidates will have time for closing statements. After the initial question/answer period, there is a public question period where attendees can ask specific questions in the webinar chat feature.

As of August 17, 2022, the qualified candidates and their contact information are as follows (in no particular order):

The Candidate Forums affiliated with independent and non-partisan groups such as the League of Women Voters of Greater Los Angeles, ensure that all City Council candidates are treated in a fair and impartial manner. It is important that the persons formulating or reviewing the questions as well as the moderator be independent and impartial. In the spirit of an impartial forum, and to collectively voice our concerns, the Chamber created a partnership with resident associations and neighborhood watch groups called WeHo for the People. West Hollywood neighborhood groups such as the West Hollywood West Residents Association, WeHo East, Norma Triangle, Ogden/Orange Grove Owls, West Hollywood North Neighborhood Association, Weho Plummer Park, N. Harper & Sweetzer neighborhood watch, and the WeHo Heights Neighborhood Association joined forces to formulate questions and/or topics for candidates important to the West Hollywood community ensuring the concerns of both residents and businesses throughout the city are addressed.

The Candidates Forum 2022 was not televised on WeHoTV as it has in previous years. The City of West Hollywood’s elections page, www.weho.org/elections, provides detailed election information and links to the California Secretary of State’s Voter Registration page, the Los Angeles County Registrar/Recorder’s website, and specific links for polling places and sample ballots.

Marquita Thomas’ West Hollywood address is at Mail Box & Things on Santa Monica Blvd. Where does she actually live?

The choices are alarming. Meister is the only candidate that puts me at ease. Duran played all the old tired hits where he takes credit for everything. Heilman has the experience, but people are sick of him. I like Martin, but all he seems to do is complain. Byars strikes me as a mini Horvath, and that’s not a good thing. Wright should distance themselves from Sepi Shyne. It looks like they are being groomed to be a perfect little rubber stamp. Thomas could win, sadly it will come down to her fundraising skills, which is really unfair. Did you… Read more »

Thanks for honest coverage. I hope you’ll keep covering the election in depth. Weho needs you. We need one honest news site.

Every single candidate, including Mayor Meister, is required to live here, to run for Council. I had zero problem with the way she was dressed. I care about her ideas. And her ethics. She’s the best one on our Council.