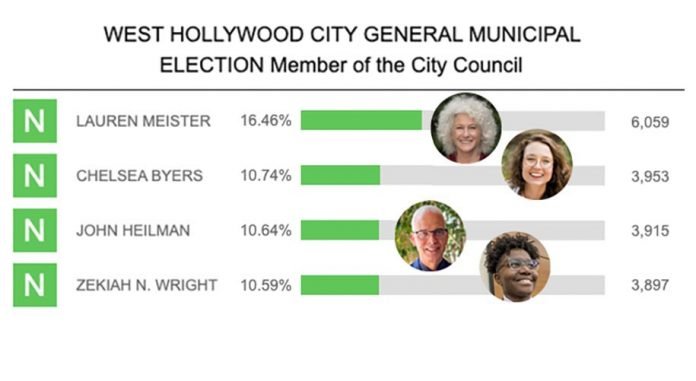 The most recent Weho elections update shows very slight number changes with the same candidates in the top three positions as of November 29, 2022, 2:50 p.m.

Mayor Lauren Meister continues in the lead with 6,059. Chelsea Byers gained 4 votes since the last update and has moved from 3,949 to 3,953 votes keeping her in 2nd place. John Heilman is barely holding the third of the three open city council seats with 3,915
votes to Zekiah Wright who continues to close the gap with 3,877, an 18 vote difference. (Zekiah was 20 votes away from 3rd place with 3,877 in the last update).

Robert Oliver and John Duran have both conceded their race for city council as Oliver remains in the fifth place and has kept Duran in the 6th spot. 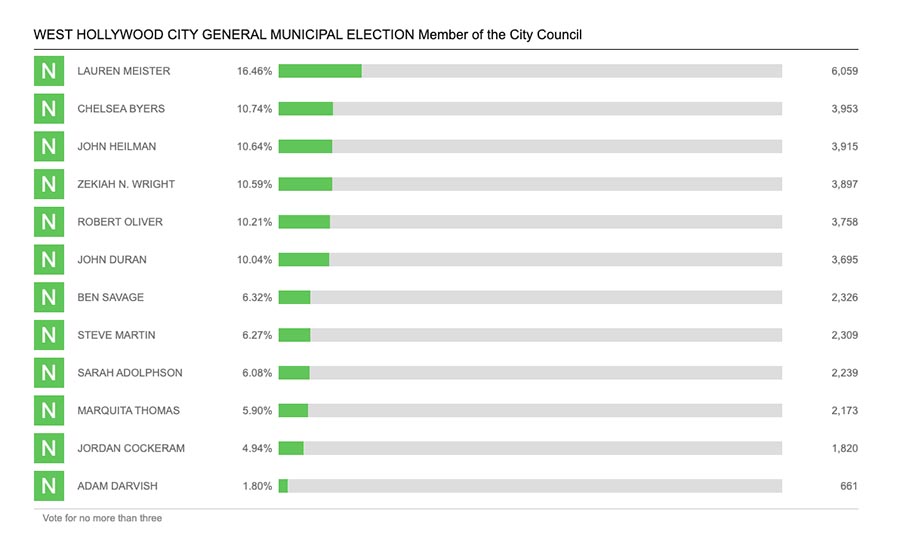 It is unbelievable and unacceptable that tomorrow is December 1 and we still don’t know the final results of our small city election. This is absolutely crazy. We can’t keep going on like this. We need to either go back to the way we used to do it, which never seem to be that big of a problem or we need to get our act together and be able to count these ballots within a week at most.

Dear Mr. “Get off my Lawn”,
The votes are counted by the County of Los Angeles. They are mostly mail-in ballots since West Hollywood is mostly Democrat and Independents. Patience is a virtue and accuracy is more important than speed. If you have a complaint, take it up with your garbage disposal because we voted for the new system, it works and it is great.

Sincerely, Most of California

P.S. You can always move to Texas.

He’s a hundred percent correct. This is pathetic. The kind of terrible performance is something you would expect in Texas. Are you from there? You seem to act like it.

Enough – the ballots have all been counted. If you read the LA County Recorder press release, all that are left are “cure” ballots – where a signature error or date error etc. prevents the ballot from being counted. County staff contact the voters to let them know & they have until this weekend to fix or cure those ballots. This last update was only cure ballots. All the regular ballots have been counted already. The law is clear that people have time to fix their ballots until the weekend. That is all we are waiting on.