West Hollywood city council elections continue to be a tight race, leaving everyone gasping as numbers and top positions continue to shift as more votes are counted. The latest WeHo Election Update results as of November 19, 2022 4:48 p.m. show Mayor Lauren Meister break the 6K mark with an impressive 6,036 votes, further sealing her big win in this election.

Chelsea Byers continues to rise in the top three open seats and has managed to bump returning candidate John Heilman off of the second position by 36 votes. Byers currently has 3,934 to Heilman’s 3,898 votes.

Zekiah Wright continues to hold the number four position with 3,877 votes, but is slowly closing the gap between them and Heilman with 21 votes. Zekiah has also widened their lead to Robert Oliver with a 142 vote gap. Robert Olver is still at number 5 with 3,877 votes.

Returning candidate John Duran started in second place on Election Night, but has since fallen to the number six position with 3,675 votes. He is 202 votes away from Oliver, the widest gap between the two yet.

The full election update is below for West Hollywood: 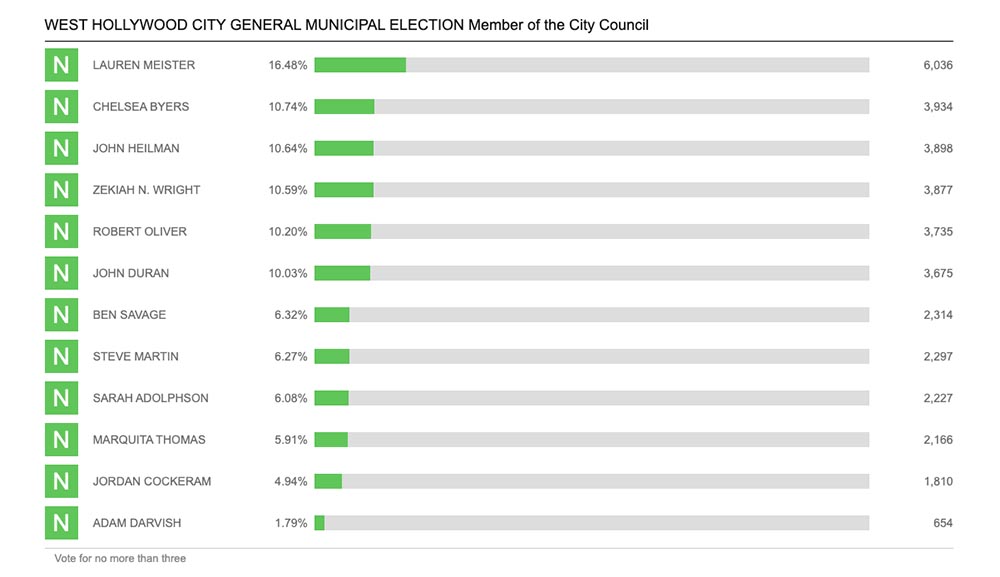 New update from the county LAVote site on November 22 at 3:32 pm PDT – nothing changed regarding the top 3. The best news is that Duran looks headed to defeat.

That is not good news, sorry.

What are the statistical chances that Byers could be so far behind that all of a sudden through mail in ballots that are taking 12 days to count the this person would shoot up the ladder this much. I hope Heilman and Duran ask for a recount to verify results. This union is known for their dirty tricks.

Get Real
Offline
Reply to  Enough!

You don’t really follow elections, do you? Mail-in votes typically belong to younger people, who are also more likely to vote for Byers than, say, Duran who is not popular at all with young voters. So as the mail-in ballots are counted it is not surprising in the least that the younger candidates have gained ground.

kab1200
Offline
Reply to  Get Real

I thought mail in votes were usually older people?