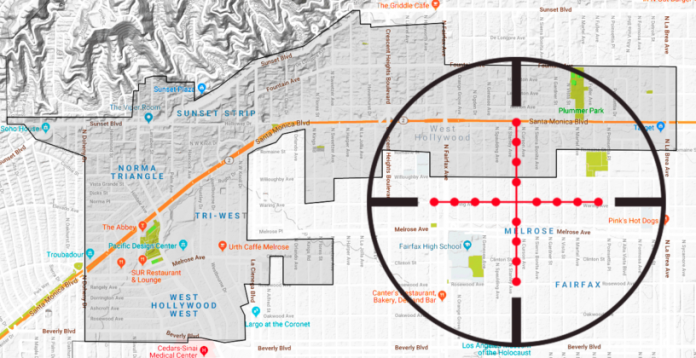 Another man was mugged at gunpoint yesterday, in what appears to be a WeHo crime spree–this time in broad daylight. The assault occurred on Waring Ave, just one block south of the West Hollywood city boundary. The muggers fit the description of the same attackers that robbed a gay couple in the heart of WeHo’s Boystown on Saturday, July 21, which was reported here. 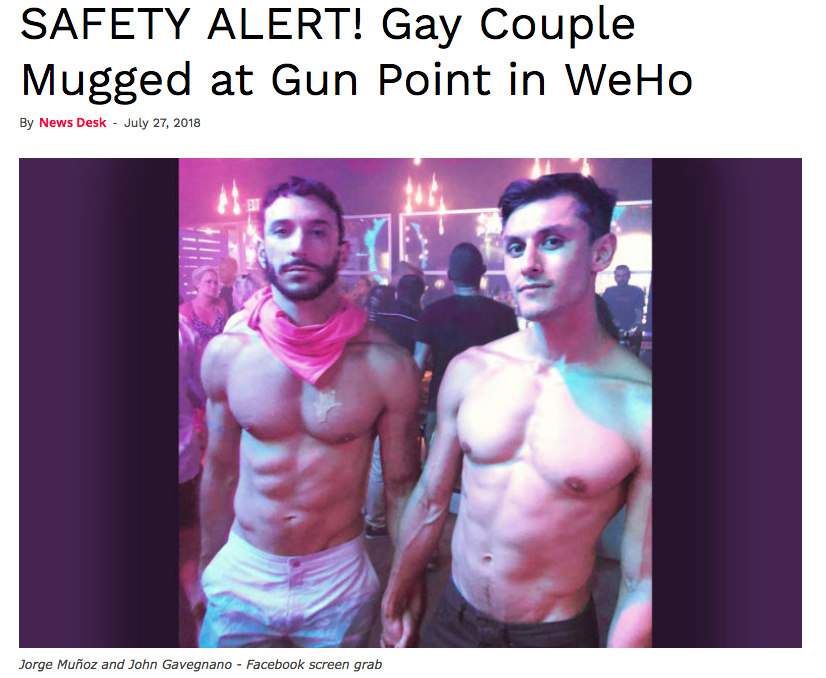 Matt Kaplan tells WEHO TIMES that he was robbed at gunpoint at 3:50pm, on Wednesday, August 1, on Waring Avenue, between Curson Avenue and Stanley Avenue. “I have to say my attack seems almost identical to the one described in your article from 7/27 which details an attack on a couple on 7/21,” he said. “Two-man job, both black, one guy tall and skinny, the other short with a bit of weight, firearm, took everything, instructed me to run in opposite direction, the whole thing.”

Kaplan lives and works in the neighborhood. He was on the south side of Waring, heading west toward Fairfax Avenue, on his way to work. The he was ambushed.

“Two men appeared out of nowhere, but they seemed to appear in front of me, so I didn’t think much of it. Then one of the men – a tall, lighter skinned young black man – walked up a small private driveway; one of those driveways that sort of forms a small alcove beside the sidewalk, while the other man continued walking west in front of me. I instantly knew something felt weird about their separation, but it was too late, the man in the driveway had drawn a gray and black pistol on me as I was passing him in the driveway, and I immediately put my hands up.”

The man with the gun gave him instructions to surrender everything to his accomplice, the much shorter, darker, and thinner person. “He began reaching into my pockets and taking literally everything; keys, wallet, phone, backpack, even patting down my ankles, in case I was stashing something of value in my socks,” says Kaplan.

“The man with the gun told me to run west, but then yelled, ‘Wait, headphones! Give him your headphones! And don’t throw them, just hand them to him.'”

He did as he was told, handing the unarmed man his headphones. “The gunman then told me to run again, which I did. As I was running and listening for gunfire, he yelled to ‘run faster,’ which of course, I did.”

Kaplan filed a police report. He said the broad daylight aspect of the crime is what he found most disturbing. One of the officers told him that there was a sharp increase in armed robberies over the past few weeks in the area.

Keep an eye out for the two suspicious individuals who match this description and walk or run in the opposite direction. This appears to be their third attack the pair in less than two weeks.

Anyone with information on the two suspects on a WeHo crime spree are encouraged to call “Crime Stoppers” by dialing (800) 222-TIPS (8477), use your smartphone by downloading the “P3 Tips” Mobile APP on Google play, or the Apple App Store, or by using the website http://lacrimestoppers.org