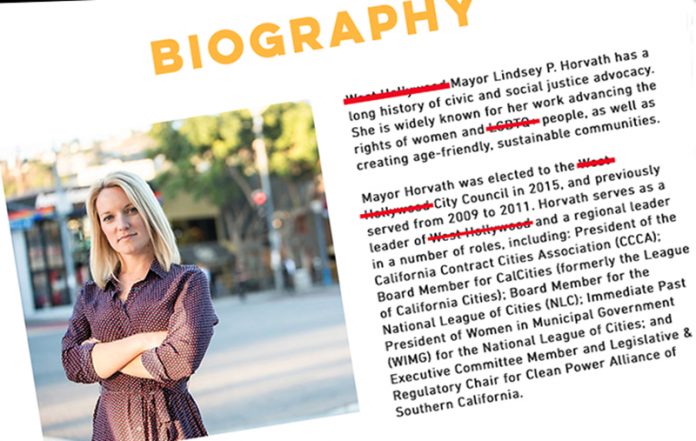 West Hollywood Council Member Lindsey Horvath updated the bio on her website, lindseyhorvath.com, as she comes close to being in the runoff for the 3rd District Board of Supervisor’s race to replace Sheila Kuehl in November. It appears she may run against State Senator Bob Hertzberg who is currently in the lead with Horvath coming in second.

Some WEHO TIMES readers and West Hollywood residents are expressing feelings of betrayal because Horvath, their former Mayor, has completely removed the words “West Hollywood” from her bio and no longer describes herself as someone who “is widely known for her work advancing the rights of LGBTQ+ people.”

“A strange thing happened on the way to Election Day,” wrote journalist Scott Steepleton for theacorn.com. “Horvath’s campaign website makes scant mention of West Hollywood, and doesn’t specifically state anywhere that she is a council member there, let alone a two-time mayor.”

Steepleton says the switch may be a conscious effort by the Horvath campaign to attract some of the new conservative voters in the northern part of the 3rd District.

WEHO TIMES readers are finding the removal of her LGBTQ+ affiliation odd. When she was West Hollywood Mayor, Horvath was known for never leaving home without some form of rainbow symbol on her person, be it a purse, pin, or mask. She now describes herself in her bio as someone whose “commitment to serving others was shaped by her family and faith… It was her church and mentors who inspired Lindsey to enter public service.”

A capture of her biography from the early days of her campaign in June 2021 — found via The Way Back Machine internet archive (www.web.archive.org) — reads in part, “West Hollywood Mayor Lindsey P. Horvath has a long history of civic and social justice advocacy.  She is widely known for her work advancing the rights of women and LGBTQ+ people, as well as creating age-friendly, sustainable communities.

Mayor Horvath was elected to the West Hollywood City Council in 2015, and previously served from 2009 to 2011. Horvath serves as a leader of West Hollywood and a regional leader in a number of roles, including…”

Her new bio reads as follows:

“Lindsey Horvath is an effective local leader and small business owner who regularly delivers major victories for her constituents in Los Angeles County. She is ready to step up for the people who need it most as your next Los Angeles County Supervisor from the 3rd District. Lindsey’s commitment to serving others was shaped by her family and faith, growing up in a neighborhood where everyone knew each other.”

Read the rest below:

It’s unclear exactly when her biography was switched. WEHO TIMES reached out to Horvath for comment via Instagram messenger. She has not yet responded to our request for comment or clarification.

A healthy mind does not speak ill of others. una mente sana no habla mal de los demas. Lindsey has won Supervisor role, that was her goal. She is a machine of LA and Weho was just where she got a free ride in the door, Sal Guerrero seat, free ride in….and no need to recall on the way out. Every powerful name is behind her, just remember power replaces the rest. Noone ajd especially her cares once they are in power about who they step on….they won. $300k a year and so.much more…control and once she is there a… Read more »

Wow, this is really disappointing. What a scummy thing to do.

Hoping this marks the end of Horvath’s political career. Hopefully she will also move out of WeHo; it will be a much better city without the likes of her.

Horvath is a political ANIMAL! What I mean that is that she has displayed unabshed political ambition. There is no way she will win this election but she will be back and she will win eventually. Thank you for showing up with receipts. This is just deplorable.

Just another example of Horvath’s pandering… lying to get elected. And that’s her in a nutshell. Horvath is a liar. Weho residents know this. Hopefully the county will not find this out because she won’t get elected. This woman is bad news.

She frequents the Los Angeles County restaurant scene? Wow, that’s a lot of restaurants from San Pedro in the south to Lancaster in the north and Pomona in the East to Agoura in the West. She has over 1 million places to choose from!!